More specifically, American teachers are underpaid when compared to teachers in the nations we compete with. Let me begin with a picture showing how we compare to Finland—everyone’s favorite educational success story and a country not noted for paying its teachers especially well. Then we’ll talk some about the right way to make international teacher salary comparisons. After that, some more data. 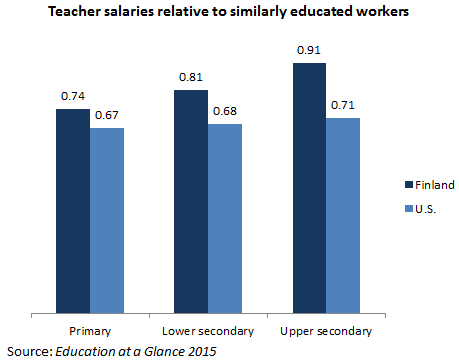 What is the right way to make international comparisons of teacher salaries? The answer depends on why you think salaries are important. Is it because someone with a particular set of qualifications deserves a certain level of pay? Or perhaps some general level of fairness or equity? To an economist, the answer is rather different: you want to pay enough to attract really good people to become teachers in the first place and to remain in teaching rather than bailing out for a more lucrative career. That means that the right way to compare across countries is to look at how teacher pay within the country compares to pay in alternative careers that a person might consider when deciding whether to become a teacher.

I picked Finland for the comparison in the chart above because, well because lots of countries aspire to be Finland when it comes to education. While paying better than the U.S., Finland is pretty much an average player when it comes to teacher pay. Most of the developed countries with which we compete pay much better. Here’s the relevant picture taken directly from the OECD’s Education at a Glance 2015.

The quick lesson is that in most industrialized countries relative teacher pay is higher than in the United States. To see the gap in a different way, the next chart tells how much the U.S. would have to raise upper secondary salaries to match relative salaries in a variety of other countries. Just as we saw for the example of Finland in the opening graphic, the gaps are even larger for upper secondary than for lower secondary. 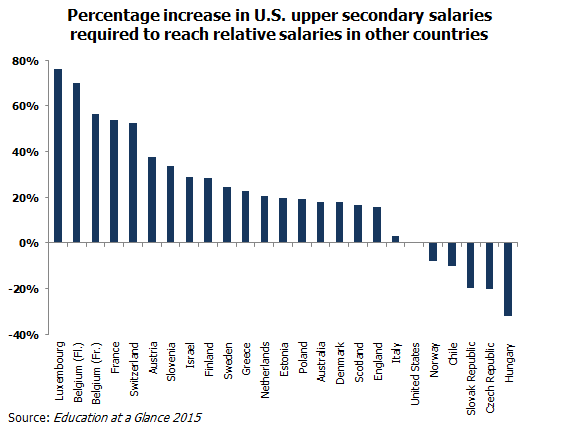 While American salaries aren’t the lowest, many other countries not only pay better, but the gap is really, really big.

The simple summary: Other countries make teaching a more financially attractive career for college graduates than we do.

The facts are the facts. But allow me to predict one response to these facts: “Teachers aren’t motivated by money, they teach because they love it.” Often true. And I’ve noticed that the people who say that teachers teach for love are quite often themselves very good teachers. Indeed, it’s hard to imagine someone who teaches well who doesn’t like their students. However, it’s very easy to imagine many, many potential teachers—who would also love their students just as much—who have made the decision to forego a teaching career in order to better provide for their family.

Dollars aren’t the only thing that determines career choice. Prestige and working conditions matter too. (Finland pays a fair amount better than the U.S. The prestige attached to being a teacher is enormously higher.) My guess is that being a teacher has both more prestige and better working conditions in other industrialized countries than here at home. (How do administrators treat teachers? How do parents treat teachers? Heck even, how do students treat teachers?) No data though, so either facts or anecdotes from those who know more about teaching in other countries are in order.

Last word: Making teaching a financially more attractive career isn’t the only thing that matters for who teaches. It does matter though, and probably it matters a lot.

Editor’s Note: Updated on June 27, 2016 to replace the first chart and rectify a labeling error that used “percentage increase” rather than “percentage point increase.”