For years, many schools across the U.S. have offered qualified students the ability to take advanced-level courses apart from many of their fellow students in a practice known as tracking. New data released in the 2016 Brown Center Report on American Education shed light on tracking, who it applies to, and its implications for student achievement and equity in American schools.

The 2016 Brown Center Report on American Education is the fifteenth installment in the long-running series authored by Tom Loveless.  One of the three studies in this year’s report, “Tracking and Advanced Placement,” investigates whether there is an association between offering accelerated math courses to students in eighth grade and performance on Advanced Placement (AP) exams four years later, when those students are seniors in high school. It’s an important question with ramifications for academic achievement and equity in American schools.

The main findings of the tracking/AP study are summarized below.

Tracking is the practice of grouping students into different classes based on ability or prior achievement. Accelerated or honors courses offer above-grade-level curricula to students who are ready for it, and allow high-achieving youngsters to move at a faster pace than their peers.

According to Loveless, tracking is typically introduced in middle schools, particularly in mathematics. For today’s eighth graders, the tracking question generally boils down to whether high achieving students who are ready for a formal algebra course will get one—or whether all students will take the same general math course.

Why tracking does not occur equally across schools

By examining state-level tracking data, Loveless finds that tracking eighth graders in math courses is quite popular across all fifty states. The average state in 2009 tracked about three-quarters of its math students, with Arkansas the least tracked state (50 percent) and Nevada the most tracked (97 percent).

However, tracking is a controversial practice. As Loveless explains, “critics argue that tracking creates or reinforces social inequities because black, Hispanic, and socioeconomically disadvantaged students are historically underrepresented in accelerated tracks.” The resulting belief that tracking is discriminatory in nature has led different communities to view and utilize the practice in unequal measure, according to Loveless. Tracking is more prevalent in suburban middle class communities and in schools serving white and Asian students and less prevalent in urban schools and schools serving predominantly black, Hispanic, or disadvantaged populations.

As a result, certain students are much more likely to be exposed to and to benefit from advanced coursework. And yet, as Loveless summarizes, recent research indicates that high-achieving disadvantaged students may benefit from tracking and, in fact, suffer losses from being enrolled in heterogeneous courses.

Does tracking in middle school lead to improved outcomes in high school?

Loveless’ study is the first to assess whether outcomes at the end of high school—specifically participation and scoring on AP exams—may be associated with tracking in eighth grade. State-level tracking data from 2009 and AP data from 2013 reveal the following findings: 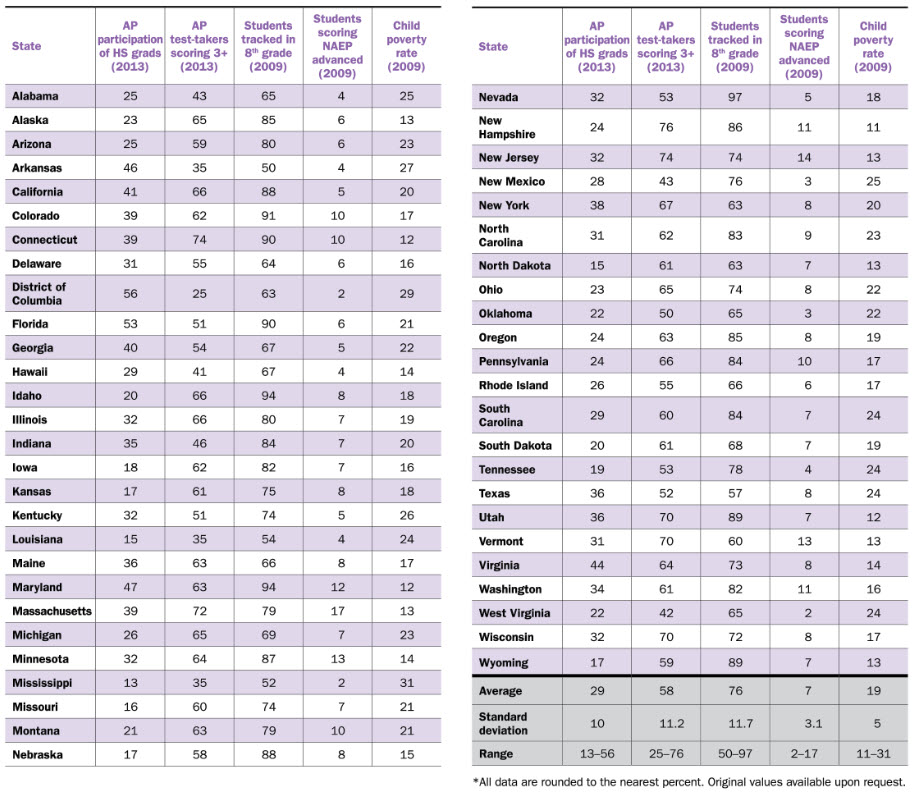 Moving toward a level playing field

The evidence presented in Loveless’ study suggests that tracking students in eighth grade is an effective way to prepare students for academic excellence, as measured by performance on Advanced Placement exams. High scores on AP exams not only signify academic distinction, but they can also translate to college credit, allowing students to get ahead and to save on tuition costs.

However, according to Loveless, “If tracking and accelerated coursework in eighth grade represent the beginning of a pipeline for promising young stars in mathematics or literature, that opportunity is more open to white and Asian students in suburban schools than to disadvantaged youngsters in schools serving students of color.”

“Long condemned by political opponents, tracking has been overlooked as a potential tool for promoting equity.”

He concludes by arguing that if policymakers are serious about expanding opportunity and equity, they need to take another look at strategies for nurturing academic talent in middle schools: “Long condemned by political opponents, tracking has been overlooked as a potential tool for promoting equity.”