There is a growing interest in proposals to make college affordable for students without requiring that they take on large amounts of debt.   To this end, two of the Democratic candidates for president have put forth plans to improve college affordability which include having students work while enrolled.  O’Malley has proposed expanding the Federal Work-Study Program and making work-study jobs more career-focused.  Clinton’s college affordability plan calls for students to work 10 hours a week.  Finally, the Lumina Foundation’s Affordability Benchmark for Higher Education, which was released at the end of the summer and discussed during a recent convening , also calls for students to work the equivalent of 10 hours per week while enrolled in college.

Figure 1: Trends in funding for Pell Grants and the Federal Work-Study Program 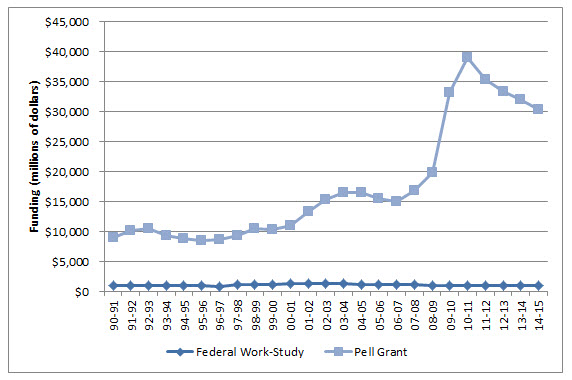 Though it is important to understand college student employment more broadly, the impact of participating in the Federal Work-Study Program is particularly policy relevant, because we can induce students into or away from these jobs by increasing or decreasing funding for the program.    Importantly, research on the impact of holding a work-study job may provide a lower bound on the estimated impact of working while enrolled.  The majority of these jobs are on-campus, which may be better for students if they are able to schedule these jobs around academic commitments and avoid wasting time traveling to off-campus work.

Though this research contributes to our understanding of how working while enrolled affects college students, several important questions remain.  For example, does working affect students’ academic outcomes because it takes away from the time students spend studying?  Also, does working have unintended consequences, such as influencing which majors students choose? In addition, there are potentially positive impacts of working that haven’t yet been explored.  For example, working might lead some students to develop better time management skills.   Students who work during college may also learn more about how to interact with an employer than those who don’t, and this may help them when they enter the labor market after graduation.

For some students, working a reasonable number of hours while enrolled in college may be a viable way to contribute to college costs.  However, before we finalize college affordability plans that require students to work during the school year, much more research is needed to better understand how to design these plans so that working is not detrimental to students’ progress.

[4] Scott-Clayton, J. and Minaya, V. (2015). Should Student Employment be Subsidized?  Conditional Counterfactuals and the Outcomes of Work-Study Participation.  Economics of Education Review, in press.