Eight years after the No Child Left Behind Act of 2001 (NCLB) was due for reauthorization, Congress has revamped the law widely described as “broken,” “loathed,” and “much-maligned.” The new bill, the Every Student Succeeds Act (ESSA), would eliminate the Department of Education’s (ED) authority to use conditional waivers.[1]

But the impact of waivers on NCLB implementation and renewal reaches beyond these specific changes in the law. Secretary of Education Arne Duncan is not the first to use the General Waiver Authority in Section 9401 of NCLB, although as the graph below shows, the Obama administration has approved an unprecedented number of waivers since 2009.[2]

Focusing solely on this recent increase in volume can mask a crucial pattern – over the last ten years, the Bush and Obama administrations both used waivers to address demands for change while avoiding a confrontation over renewal with Congress. While waivers allowed states to deviate from NCLB, strategic use of this tool has enabled delay in the renewal process. 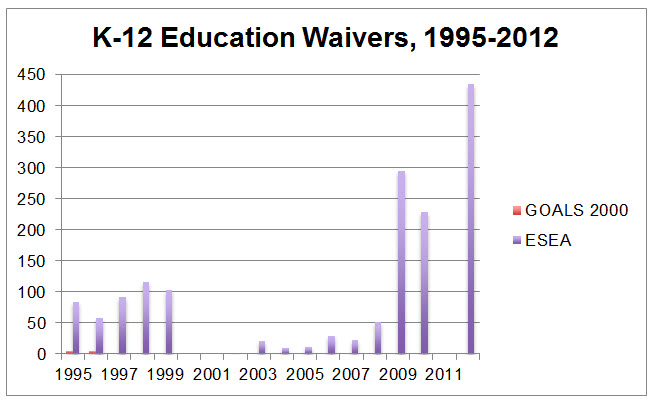 Beginning in 2005, the Bush administration faced increasing pressure to grant states relief from NCLB’s onerous accountability requirements.[3] The administration might have been forced to revisit the law then if not for the safety valve provided by the General Waiver Authority in Section 9401. In a policy letter issued on November 21, 2005, then-Secretary of Education Margaret Spellings articulated a “commonsense approach” to implementation, offering waivers from key provisions. This approach reversed her predecessor’s position that waivers were not an option—indeed, Spellings invited states to submit proposals for growth model pilots, providing states with an opportunity to depart from the accountability system mandated by NCLB.[4]

The Bush administration’s strategic use of wavier authority allowed them to address the discontent that simmered among the states while simultaneously protecting their signature education law. A few months after the initial offer of flexibility, Secretary Spellings issued a reminder to Chief State School Officers that only states demonstrating adherence to the “bright line principles” of NCLB were eligible for flexibility. The administration had an obvious motivation to avoid legislative overhaul of NCLB: the law was a cornerstone of the President’s domestic agenda. Even as ED granted states flexibility from the law, in his 2007 State of the Union address President Bush stood by NCLB, calling it a “good law” and warning against “backsliding and calling it reform.”

In stark contrast, President Obama had no stake in preserving NCLB. In the June 2009 Attitudes Toward the Public Schools Survey, 48 percent of respondents viewed the law unfavorably, while just 28 percent viewed it favorably. But his legislative proposal to reform NCLB, the Blueprint for Reform, was essentially dead on arrival – the Blueprint was announced on March 10, 2010, just weeks before the Affordable Care Act infamously passed without a single Republican vote.

In this political climate, the Obama administration opted for a waiver strategy in lieu of a public and potentially costly renewal via Congress. Over a year after introducing the Blueprint and making little headway in Congress, on September 23, 2011 the administration announced its Elementary and Secondary Education Act (ESEA) Flexibility waiver program. This strategy echoes the decision made by the Bush administration, although the specific political motivations and mechanisms of their waiver policies differ. The ESEA Flexibility waivers allowed the Obama administration to respond to increasing pressure to change the unpopular law but also helped them avoid another legislative battle in the immediate wake of the acrimonious ACA debates.

While ESSA eliminates the Secretary’s authority to attach conditions to waivers, rebuking the current administration’s tactic, our understanding of the impact of waivers should not be limited to this backlash. One long-term consequence of the Bush and Obama administrations’ strategic use of waivers has been a series of piecemeal changes to a law that many have long viewed as fundamentally broken in lieu of legislative renewal and the large-scale shifts that accompany reauthorization.

However, placing blame for the delay in reauthorizing NCLB with either or both administrations’ use of Section 9401 waiver authority is perhaps unwarranted. The extreme partisan polarization that characterizes this era shares the blame for the eight years of delay that preceded the current ESEA renewal. Indeed, in this climate when the feasibility of bipartisan compromise is often in doubt, it is hard to criticize administrations that opt for incremental revision at the state level where otherwise no measure of change appears possible.

[1] Many point to this change as a repudiation of Secretary of Education Arne Duncan’s ESEA Flexibility waiver program – to receive flexibility from NCLB, states were required to tie teacher evaluation to student achievement and adopt college and career-ready standards, widely recognized as the increasingly unpopular Common Core State Standards.

[2] Part of the explanation for this dramatic increase in the number of waivers approved in recent years comes from the structure of the ESEA Flexibility program, in which each state’s waiver package was actually comprised of at least 10 individual waivers. This figure also includes the 10 Ed-Flex partnerships granted under the 1994 Goals 2000: Educate America Act. Goals 2000 introduced the Ed-Flex Partnership Demonstration program under which states could apply for the authority to waive requirements from federal law.

[3] In a 2006 Brown Center paper, “The Peculiar Politics of No Child Left Behind,” Tom Loveless found that 34 states were against NCLB to some degree while only 16 were neutral or supportive. Similarly, in his 2009 article “Rebels and their Causes: State Resistance to No Child Left Behind,” Bryan Shelly found that 38 states had considered legislation “critical” of NCLB by 2006.

[4] In a policy letter issued on February 15, 2002, Secretary of Education Rod Paige made it clear that waivers from the administration’s signature education law were not available.