By most accounts, teachers aren’t paid enough. On an annual basis, teacher salaries lag those of other professions. Paltry earnings are often linked to high teacher turnover or insufficient quality in the workforce.

But teacher wages differ from other professions in another key way: in the steepness of the salary curve over a career. Teaching, like many fields, rewards experience. But what’s unlike other professions is the degree to which pay is linked to seniority and how much it affects earnings toward the end of teachers’ careers.  The compensation patterns create potentially problematic consequences for teachers, school districts and students alike.

Using data from the U.S. Bureau of Labor Statistics, a recent study I’ve authored finds that other professionals (lawyers, doctors, accountants, computer programmers) reach their peak salaries around age 40; teachers enter their 40s with much lower earnings on average and don’t hit peak earnings until age 55 or so. As the figure below demonstrates, teaching stands out as atypical, with a larger share of pay diverted to late-career raises. 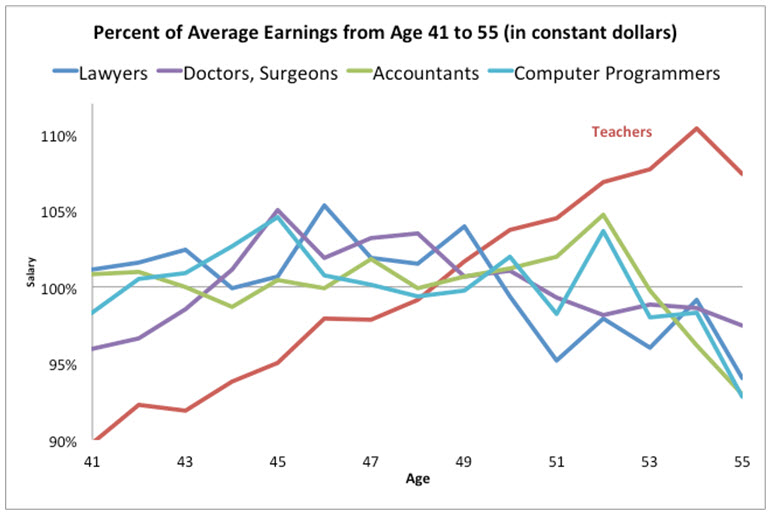 This evidence does not mean that teachers are being overpaid, even in their mid-50s. Rather, it means a disproportionate amount of available salary funds is concentrated on teachers at the end of their career (when compared to other professions).

The compensation pattern above is shaped by several practices. Despite the recent push to modernize teacher pay, the typical district salary schedule still awards “step” increases associated with experience (and bumps for graduate credits). In some districts, the differential is so high that a senior teacher earns the equivalent salary of two junior teachers for the same job title and duties.

And in most years, the district layers annual cost of living increases (COLAs) in ways that simply exacerbate salary differences between early-career and late-career teachers. Districts tend to follow a relatively unexamined pay tradition with COLAs, often automatically doling out the new funds as an across-the-board percentage raise. Added on top of an uneven base, this works to drive a higher proportion of dollars to veteran teachers near the top of the pay scale. Compare the actual salaries of two New York City teachers in 2013, one with 5 years’ experience, one with 22 years under her belt: the cumulative COLA funds awarded in a five-year contract (some retroactively) yield $25,014 to the 5-year teacher vs. $41,542 for the senior teacher.

In addition to salaries, districts drive money to late-career teachers in myriad other ways.  In Washington State, for instance, where districts pay stipends for teachers’ non-teaching duties (Time, Responsibility and Incentive, or TRI stipends), nearly every district in the state structures those funds to drive more to the most veteran teachers. Seattle, for instance, funnels over $18,000 in TRI money to late-career (highest-paid) teachers; its early-career (lowest-paid) teachers receive half of that amount. When philanthropy funded the new labor contract in Newark, New Jersey, a few years ago, even those philanthropic dollars were divided in ways that gave larger signing bonuses to late-career teachers. Some districts promise senior teachers first dibs on stipend opportunities. Some labor contracts specify a stipend for teachers in the same year they retire.

Less commonly recognized are the differences in pension earnings that further widen the teacher compensation gap. As two new reports show, in most states, a teacher in her 10th year of teaching earns none of the billions deployed in state and locally funded teacher pensions during that year; pension earnings vest in the later years, such that a teacher with 30 years’ experience earns some $20,000 a year on average in pension wealth, beyond any increases in salary.

Why does all of this matter? District leaders are steering a disproportionate share of the highly constrained public education funds toward a small segment of the teaching force–the group of teachers least likely to leave teaching. The National Center for Education Statistics Teacher Follow up Survey reports that while fewer than four percent of teachers with more than 20 years’ experience leave before retirement, 13.5 percent of teachers with under five years’ experience do. The lower turnover among senior teachers might be a result of the higher salaries, or of proximity to pension earnings – we don’t know for sure–and changing the salary patterns might affect turnover among veterans. But current distribution patterns leave few dollars for pay raises in a teacher’s earlier years where turnover is most acute. 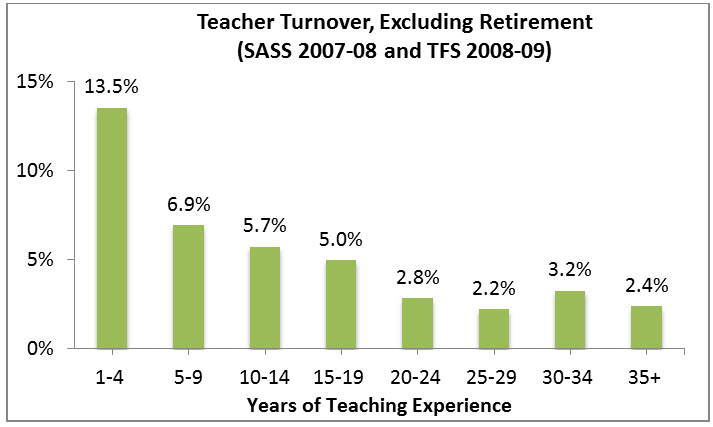 These practices not only result in lower salaries for most teachers, they also channel funds in ways that jeopardize equity across schools and create havoc for district financial stability. High-poverty, high-minority schools tend to have more early-career teachers and fewer late-career teachers, which means fewer salary dollars reach the schools with the highest needs. For districts where enrollment declines mean fewer new hires, the costs of a mostly senior teacher pool can cause chaos (as has been the case in Newark and Detroit). Further, because states tie pension obligations to salary during the last few years of teaching, higher end-of-career pay triggers more pension debt.

Some will argue that the solution is to raise all salaries, since teacher salaries are lower than in other professions. That’s fair. But meantime, the system should do the most with the dollars it has. In our recent paper we identify COLAs as a pragmatic starting point to help drive more dollars to teachers to boost wage equity, since labor and management negotiate COLAs relatively frequently and it’s an admittedly heavier political lift to overhaul traditional district salary scales (which are often embedded in district policies, union contracts and, sometimes, state policy). Districts could dole out COLAs in fairer fixed flat-dollar amounts instead of on a fixed percentage basis, ensuring the new money works to raise all salaries equitably. Of course, other options exist to boost pay, including one we proposed in an earlier paper to raise pay for effective teachers willing to take on more students.

In short, though the teaching profession is generally underpaid, the distribution of salary funds across teachers further hurts early and midcareer teachers—those who also happen to be most likely to leave. For districts in states like Mississippi, New York, and West Virginia, where the pay gap between mid- and late-career teachers is widest, leaders might consider what effect their salary policies are having on turnover, equity, and district financial sustainability.