September 17, 2015 marks 228 years since the end of the convention of delegates assembled in Philadelphia for the purpose of, in James Madison’s original notes, “revising the federal Constitution” (he later changed “Constitution” to “system of Government”). After 39 of the delegates, including George Washington and Madison, signed the document, it went to the states for ratification, which occurred the next year and then came into force in 1789. Today, more than 200 years later, what would James Madison—often called “the Father of the Constitution”—think about contemporary developments in American politics and public policy?

That is the question posed by the authors of a new volume of essays from the Brookings Institution Press. In “What Would Madison Do? The Father of the Constitution Meets Modern American Politics,” 10 prominent scholars explore modern governance and policy issues through the lens of Madison’s constitutional framework.

“If Madison could peer at the present,” write editors Benjamin Wittes and Pietro Nivola:

how would he regard the current condition of the key political institutions that he helped originate and the government policies that they make? The book, in short, explores what Madison might think of contemporary U.S. politics and how reverential we should remain toward the system that he bequeathed to the nation.

Wittes, a senior fellow in Governance Studies at Brookings and editor-in-chief of Lawfare blog, and Nivola, senior fellow emeritus at Brookings, add that “the foundation that Madison helped lay has proven neither static nor unproductive in the modern age. How radically the modern American state has stretched the original constitutional limits that he held dear remains a contested question.” 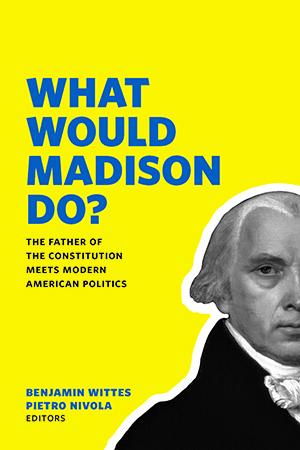 The volume’s ten chapters originated as papers in a conference convened at Montpelier, Madison’s home in Orange, Virginia, in the fall of 2013. The conference was convened jointly by Brookings and the Robert H. Smith Center for the Constitution at Montpelier.

Authors populate their essays with insight and humor. John DiIulio Jr. (University of Pennsylvania), for example, asks: “Metaphorically speaking, is the Constitution America’s communion suit?” after explaining that his late mother threw away his beloved (by her) childhood communion suit only a few years ago. The Constitution, he explains, “was tailored for a slave-holding, Anglo-Protestant-dominated, horse-and-carriage, eighteenth-century nation people by roughly 4 million mostly Eastern Seaboard-hugging souls.” DiIulio explores the degree to which it remains “an ill-fitting suit” for the nation and proposes significant constitutional reforms.

“A funny thing happened, as they say in the Borscht Belt,” opens Brookings Senior Fellow Jonathan Rauch in his chapter on compromise, “on the way to legislative gridlock and fiscal meltdown.” The Constitution’s structure, argues Rauch, “forces politicians to compromise, by creating competing power centers and depriving any of them of the power to impose its will on others.”

Visit the book’s page on our website to learn more about the authors, their chapters, and how to acquire your own copy of the book.

The federal judiciary should stop resisting: It needs an inspector general