The Brookings Debate is a new event series in which Brookings scholars and other experts in the field debate today’s most critical issues. Modeled after the Oxford Union format, each debate focuses on a single, controversial question, with two speakers for and two speakers against.

On Wednesday evening, June 24, three policy experts and one U.S. senator will go head-to-head in the first Brookings Debate. The question of the night: Should the U.S. put boots on the ground to fight ISIS?

Opinion polls show that Americans remain split on the issue of sending ground troops to fight ISIS, even as ISIS forces continue to hold large swaths of western Iraq and portions of Syria.

To hear arguments for and against U.S. intervention, register to watch our live webcast here. Unfortunately for those in the D.C. area, registration for the in-person event is at capacity. 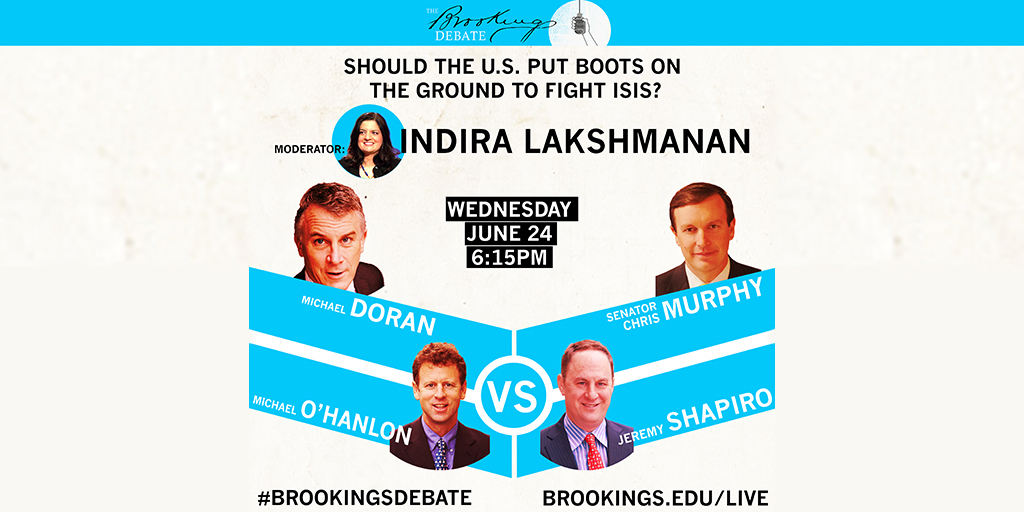 Before you watch, learn more about the issues from the debate participants. For an in-depth backgrounder on the extremist organization, read “The Islamic State: A Brief Introduction,” by Charles Lister.

“The United States, when it demonstrates a pronounced bias against military action, makes it more likely that it will have no choice but to intervene in a massive, unilateral fashion. In order to keep the Middle East at bay, it must enlist allies, but it cannot succeed at that goal without some application of military force. This, I believe, is the lesson that President Obama has learned in the last three months.”

“Obama announced that his strategy would ‘degrade and ultimately destroy’ the enemy. The word ‘ultimately’ deserves special attention. Obama has left us with the strong impression that he is dedicated to defeating the Islamic State, but the method that he has adopted—air strikes—will not do the job.”

“We have a mess on our hands in Iraq and Syria, and it will take not just weeks or months to fix it, but years. That’s OK. We have the workings of a core strategy in Iraq and it is not too late to get one in Syria. But it is time to get on with it.”

“We are a long ways from being out of the woods in Iraq, either in the fight against ISIL or the enhancement of the country’s longer-term prospects for stability. We do need to think much harder about Syria, but we mustn’t take Iraq and its future for granted.”

Read Beyond the ‘easy part’: Next steps in Iraq »

“Sen. Chris Murphy Monday pushed his campaign to bar American ground troops from the U.S. fight against ISIS by pressing for a Senate amendment that would prohibit the Pentagon from putting boots on the ground. ‘It directly created the conditions that led to the Islamic State’s rise, and provided our enemies with the propaganda they needed to recruit more terrorists than we could kill,’ Murphy said. ‘We must do everything within our power to aid our allies in the fight against ISIS—including recognizing the fact that the presence of American ground troops cannot solve every problem.’”

Director of Events and Strategic Partnerships - Office of Communications

“Murphy said he is against the use of ground troops and believes President Barack Obama’s plan to send an additional 1,500 U.S. troops to Iraq needs to be decided by Congress. ‘I do not think the president has the ability under current authority to authorize 1,500 troops without Congress acting,’ said Murphy.”

“So maybe it is time to start attacking that fear directly, rather than through a quixotic quest to eliminate terrorism or radicalization. We don’t have a global summit to reduce crime after all, nor do we believe that it can or must be eliminated to preserve order. Maybe we should consider instead a summit on societal resilience. That summit would help Americans understand that terrorism really isn’t much of a threat to their lives or values. And then perhaps they would be less afraid.”

Read Countering violent extremism: The quixotic quest for a rational policy on terrorism »

“That said, terrorist attacks carried out by returnees from Syria or Iraq are almost inevitable. Terrorism has unfortunately become a feature of modern life. It cannot be eradicated, only controlled, and the fallout of the civil wars in Syria and Iraq will make that problem more difficult. The United States and Europe have dealt with this problem before and already have effective measures in place to greatly reduce the threat of terrorism from jihadist returnees. But the standard of success cannot be perfection. If it is, we are doomed to fail and, worse, doomed to overreact.”

Read Be afraid, be just a little afraid »