The game has indeed changed. We have a new Africa and the focus is no longer on clamoring for aid. Today we are talking about investment, entrepreneurship, innovation, and so on. — Mwangi Kimenyi, director of the Africa Growth Initiative at Brookings

Yesterday, Brookings hosted a forum of entrepreneurs and leaders in business, government, civil society, and media to explore priorities for U.S.-Africa policy; business strategies for economic growth and development; innovation and governance issues; and how Africa is perceived by the rest of the world. Full event video is now available.

The event occurred on the first day of the U.S.-Africa Leaders Summit in Washington, DC. In the morning, two members of Congress—a Democrat and a Republican—agreed on the importance of U.S. relations with the nations of Africa, and both strongly supported bipartisan reauthorization of the African Growth and Opportunity Act (AGOA). Read more here about what Reps. Karen Bass (D-Calif.) and Christopher Smith (R-N.J.) said.

The governance story [of Africa] is not a weakness, it’s a strength for Africa and one that helps everybody … and should help everybody want to invest more and more there. — Carolyn Campbell, Emerging Capital Partners

In the first panel discussion, participants addressed how opportunities, entrepreneurs, and consumers are changing a region. The discussants, including Carolyn Campbell, managing director and general counsel of Emerging Capital Partners; Donald Kaberuka, president of the African Development Bank; Mo Ibrahim, founder and chair of the Mo Ibrahim Foundation; and Jason Njoku, founder and CEO of iROKO Partners, put particular emphasis on governance and economic development.

Anything which supports and facilitates any type of economic opportunity amongst young people just has to be somehow encouraged and amplified. — Jason Njoku, iROKO Partners 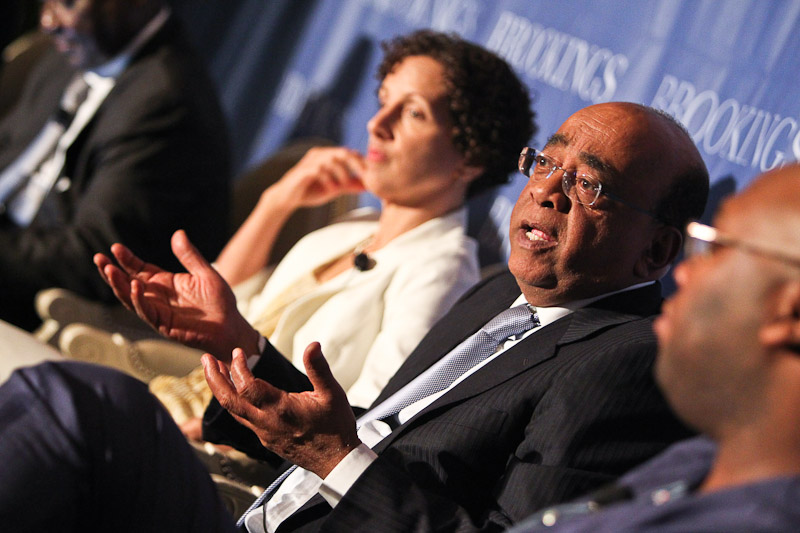 During the conversation, Ibrahim posed the question, “What is Africa exactly?” In his answer, he touched on the complexities of a vast continent populated by multiple states, and argued for a single African market:

Is Africa a geographical concept? Is it an emotional one? What is Africa? Africa is 54 countries. Each country has its own regime, its own borders, its own customs, its own laws, its own currency. How can you do business with fragmented 54 countries in Africa?

What is the difference between China and Africa? There is one difference. China is not 54 provinces. That is one difference. If China was 54 countries, each one of them speaking different languages, you need a passport you need a visa to go to the other part, this guy speaks Mandarin, this guy speaks English, this guy speak Arabic … where  would China be today? It would be Africa. Absolutely. No opportunity, no chance. Unless we pool our resources, and also create a single market, unless we remove our borders, we have a major problem in the future. We cannot succeed on our own as 54 little countries, everybody trying to find their own little corner.

The most important thing that has to happen to change Africa is going to have to be more and more investment … there are a lot of dollars that want to invest in Africa from all over. — Jay Ireland, GE Africa

In the next panel, business leaders focused on how large international corporations and donors should invest in Africa, and how Africans themselves need to find ways to trade with each other and invest in Africa. The panelists included: Fernando de Sousa, general manager of African initiatives for Microsoft; Jay Ireland, president and CEO of GE Africa; Robert Collymore, CEO of Safaricom; and Strive Masiyiwa, executive chairman of Econet Wireless International.

Masiyiwa spoke to the energy in Africa today that derives from its youth population, which will grow exponentially in the coming years:

There is an energy in Africa today. If you go into the bars and the coffee shops wherever you are, there are more young people discussing the future and the things they are doing and want to do. … They are interacting and talking and sharing ideas. That is not to say we are not confronted with all the other challenges. And we have to deal with all the issues of terrorism just like everybody else, the challenge of leadership and corruption … But yes, there is a greater sense of energy in the future coming out of Africa and that’s a good thing for the world. Because half the world’s youth will be living in Africa over the next 25 years. … We have to invest in this youth.

As Africans we shouldn’t ever have to reach out to build our own country, there is enough money in Africa itself. — Akon, Akon Lighting Africa

Key themes of the discussion were the power of storytelling and recognizing that Africans need to work to change perceptions. Ba said that “you have to start from the premise that, indeed, Africa is complex.” For anybody to be an “Africa ‘specialist’ … and comprehend the complexities of 30 million square kilometers and a billion people” is “very difficult to do.” He observed that very few, if any, of the African heads of state visiting Washington this week framed their story in the media before they came here. “You can’t imagine President Obama going somewhere without giving an interview to that country. It’s all about framing the story, and we’ve got to actually frame the story, the narrative of the continent, more and more,” Ba argued.

It was completely inconceivable to me that I knew, as a Liberian, everything you possibly know about the United States, and these Americans didn’t know anything at all about Liberia.” — Helene Cooper, The New York Times, on going to school in America

Cooper, who grew up in Liberia and moved to Knoxville, TN as a teenager, agreed that “Africans need to tell our own story … that is a challenge we need to take up.” She referenced the Ebola outbreak in West Africa as an example of the fact that Western media, of which she acknowledges she is a part, has a need “to constantly Americanize every African problem and issue that’s not relevant to us until we can find a Western face to put on it.” However, she said, “it’s also a challenge for us as Africans to figure out our own way to tell our own story.” 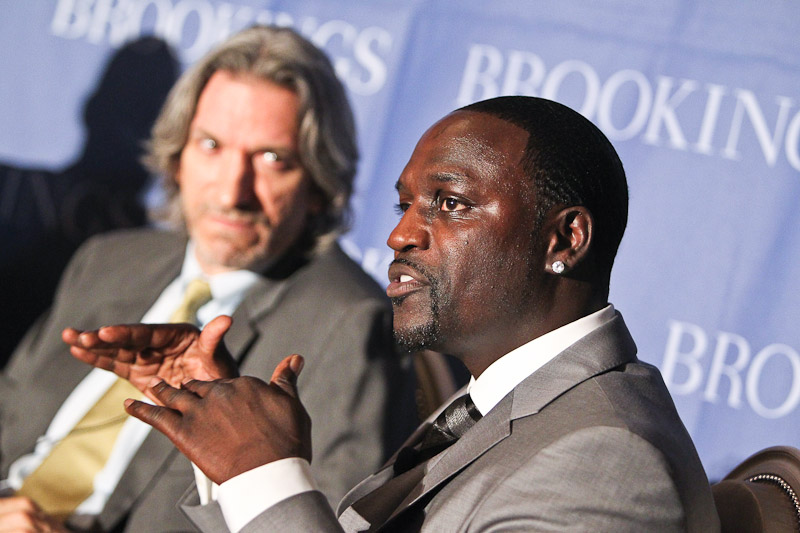 Akon, who was born in St. Louis but spent much of his childhood in his parents’ native Senegal, said that “we have a history that is untold even though it’s … been told in so many ways and told from the likes of others who have marketed themselves to become leaders in their own universe. … So when you look at a place like Africa that has so much history, so much resources … everything out of Africa has been adapted everywhere else to build there, but we’ve never utilized what Africa has to build Africa.”

“You can’t blame [the media],” Akon said, “they are just messengers, they report what they see, and us as humans—we have to evaluate that information.”