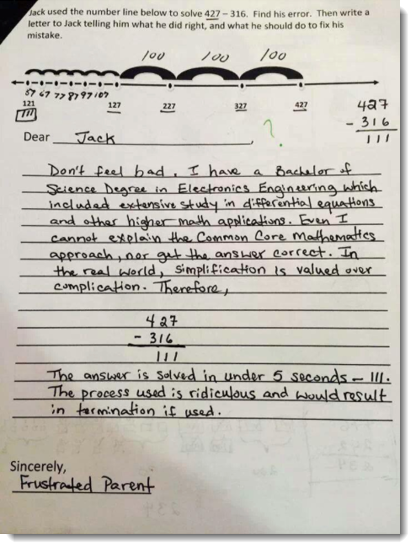 In a recent Brookings Cafeteria Podcast, I asked Tom Loveless about a controversial math problem that has been making the rounds and has been attributed to the Common Core State Standards. It has been ridiculed widely, including on both Fox News and The Colbert Report. (See image to the left, click to enlarge.) I asked whether there is any credence to it being part of the Common Core standards, or if it was a curriculum implementation problem. His nuanced answer: “It’s both.” This particular problem predates Common Core, he says, and yet it is the kind of bad problem being used in schools because districts are promoting a way of “mathematical reasoning” that Loveless says has never worked in the past.

Listen to the podcast below starting at 21:22 or read the transcript below.


So, a lot of the Common Core defenders said, “You can’t blame the Common Core for this.” Well, that’s half right. The half where I think they’re wrong is in school districts, and in schools, and in classrooms, people hear a certain message from Common Core. And one of the messages is: kids need to be doing this kind of deeper learning, deeper thinking, higher-order thinking in mathematics.


We’ve gone through this in the past. We’ve gone through the exact same thing. In a way what it does is, it gives local educators license to adopt a lot of this garbage, this really bad curriculum. And they do it under the shield of the Common core. And that particular problem is just a terrible math problem and should not be given to kids. I would never have taught any of my elementary school kids that way. It’s a terrible problem. And there are worse problems I’ve seen in the first grade, quote unquote, “Common Core math.”


But again, those problems have been around a very long time. They predate Common Core. But you have educators who are bringing them in because there are certain phrases you can use like “mathematical reasoning,” for example. This is like a dog whistle to a certain way of approaching mathematics that has never worked in the past. It has been tried over and over again. [In] the 1960s it was tried. It was tried in the 1990s. It failed both times. And we are seeing a resurrection of some of these bad materials and these bad practices again. And it’s partially the Common Core’s fault.


Loveless is a senior fellow in the
Brown Center on Education Policy
at Brookings. Get more resources on his and others’ Common Core research from the
podcast’s show notes
.