At an event today to launch a new report, “Faith In Equality: Economic Justice and the Future of Religious Progressives,” Sister Simone Campbell, executive director of NETWORK, a national Catholic social justice lobby and leader of Nuns on the Bus, said that there is “a hunger in our nation that transcends religion, and transcends the identification of right-left, of Republican-Democrat, of tea party, of whatever.” A “huge hunger to be inspired, to be challenged, and to heal.” 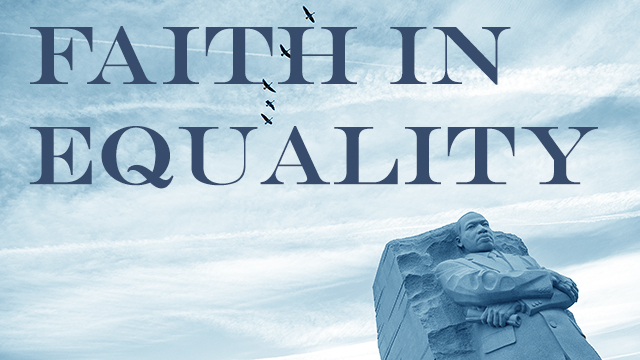 In the report, authors E.J. Dionne, Jr., William Galston, Korin Davis and Ross Tilchin argue that economic justice should be the focus of today’s progressive religious movement. Despite a series of challenges they describe, “religious voices,” they say, “will remain indispensable to movements on behalf of the poor, the marginalized, and middle-class Americans.” One of the many opportunities the authors identify for the progressive religious movement that has particular resonance in today’s social and political environment is to “build bridges with conservative people of faith who are engaged in action for social justice globally, and with secular partners, who share very similar views on economic questions.”

Dionne, in introducing the report, noted that “religion in America has always had progressive and conservative sides,” but “with the rise of the religious right, we have tended for a very long time to see religion as living only on the right in this country,” especially in the media. This, he said, is “historically very mistaken …in talking about the abolitionist movement, the Progressive movement [and] the civil rights movement,” among other examples.

“We argue in the paper,” Dionne said,

that social and economic justice is actually to a great degree a unifying force within the religious community. We suggest that it’s a mistake to look at the religious community purely in terms of red and blue … because among conservative evangelical Christians, particularly younger conservative evangelical Christians, there is an outpouring of concern for the least among us, for the poor, for the victims of AIDS in Africa. And those concerns are actually beginning to bleed over into domestic concerns. We may argue about government’s exact role, but it is for Christians quite clear that Jesus cared quite a lot about the poor and talked quite a lot about the poor.

A discussion of the report, followed with Gary Dorrien, the Reinhold Niebuhr Professor of Social Ethics at Union Theological Seminary, and New York Times columnist Ross Douthat. Galston moderated this discussion and the second panel, during which participants shared their views and experiences on the current landscape and looking ahead: Jennifer Butler, CEO of Faith in Public Life; Rev. Gabriel Salgeuro, president of the National Latino Evangelical Coalition; Dorian Warren, an associate professor at Columbia University; and Michael Wear, a former White House and campaign aide to President Obama.

Sr. Simone Campbell delivered closing remarks at the event. “I want,” she said, “to look at what is the bridge forward, where are we going, what is the consequence of this study.” The remainder of her remarks are reprinted below nearly in their entirety:

I was really touched, E.J., by the way you ended your opening with, inspire, challenge and heal. Because in my experience I think that is a hunger in our nation that transcends religion, and transcends the identification of right-left, of Republican-Democrat, of Tea Party, of whatever. But there is a huge hunger to be inspired, to be challenged and to heal.


Pope Francis (whom I am affectionately calling Pope Frank because I don’t think he would mind at all) says in his exhortation that, his third point about peace building—which in some senses we need to do in our nation in order to move forward, we need to build peace among this polarized reality that we experience politically—… he says: “There also exists a constant tension between ideas and realities. Realities simply ‘are,’ whereas ideas are ‘worked out.’ … There has to be continuous dialogue between the two lest ideas become detached from realities. It is dangerous to dwell in the realm of words alone, of images and rhetoric. So a third principle comes into play: realities are greater than ideas. This calls for rejecting the various means of masking reality: angelic forms of purity, dictatorships of relativism, empty rhetoric, objects of more ideal than real, brands of ahistorical fundamentalism, and ethical systems bereft of kindness, intellectual discourse bereft of wisdom.”

“It’s that lack of reality that I think is at the heart of the tension and the political fight. The fact is the people of our nation know what is happening,” she said.

Sr. Simone also reflected on the Nuns on the Bus journey, which started in Iowa:

On our bus trip, I think one of the things that captured imagination, is that we came to lift up the local stories. We came as learners to local reality to hear the story of the struggle of people and to hear their worry, their concern. …


What we discovered is as learners in the local reality is that people have a story to tell. Everyone has a story to tell. We drew nuns, we drew Catholics, we drew a wide variety of faith folks. I will never forget the first night in Des Moines: I had never realized that there was a Buddhist temple in Des Moines and they all came to our opening event. It was a stunning thing for me. But we also touched the “N-O-N-E-S,” the “nones,” because I think what we did was to speak with a heart of clarity, with a heart of candor, with a heart that welcomes the hundred percent, and our nation needs that healing so that we are no longer divided, but it is a way of coming together. And for me, faith is why I do this. Faith is what motivates me.

“But faith,” she said, “has political consequences. And hence it’s not so much what politics can do with faith, but what faith can do with politics.”

Sr. Simone told the Brookings audience stories of two people she had met who were quite different, but who are examples of her call to focus on “justice and the hundred percent.” At a White House ceremony to witness President Obama signing an executive order to raise the minimum wage for federal contract workers, she sat next to a young woman wearing a blue dress named Robin. This woman explained to Sr. Simone how she worked full-time at a national clothing store chain and bought the dress with her employee discount, but that she also lived in a homeless shelter because she couldn’t afford rent. “That’s wrong in the richest nation on earth,” Sr. Simone told the audience. “It’s wrong because Robin is being robbed of a future. We’ve got to stand up for the Robins of this world.”

Her second story involved Jason, a 35-year old entrepreneur she met at a fundraiser in San Diego. Jason, who had built three companies, “starts talking about political realities” and “that he pays a living wage to all of his employees,” Sr. Simone said. Jason said his employees “were more committed, more loyal, [had] better productivity, [and] it made sense for his business.” But, she said that he told her that “it was beginning to make him angry that his taxes were going to fund his competitors. … His taxes were going to food stamps. They were going to a variety of other safety net programs which Robin and her friends were having to use because they were being paid such low wages.”

“It is wrong that our people cannot earn enough in their employment to live in dignity,” she said at the conclusion of these stories. “In the richest nation on earth, we’re better than this. We need to speak of the stories of Robin and Jason.”

Sr. Simone also relayed a story about meeting Rep. Pete Gallegos, whose attitude toward immigration reform is connected to his concern to protect his own son, and how that concern was mirrored in the body of a woman he found dead in the Arizona desert, holding the body of her child, who was trying to immigrate to America.

“Now, where does this leave us?” she asked.


I think one of the great things about being a faithful progressive is that I have a high tolerance for pluralism. Even for tea party folks, it’s a challenge, but we have to radically accept everyone in this hundred percent. And in that process I think, while I come at it from faith, where we meet up in our nation is the Constitution.


And that is where we become we the people of the United States striving to form this more perfect union.