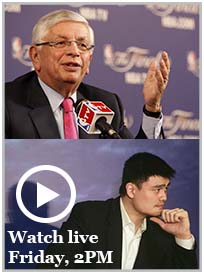 This Friday, March 28, the John L. Thornton China Center at Brookings and the China Institute for International Studies will host a live webcast with renowned basketball player Yao Ming and NBA Commissioner Emeritus David Stern to mark the 35th anniversary of the establishment of U.S.-China relations.

In the first panel, Yao and Commissioner Stern will discuss the role basketball has played in uniting the two countries. In the second panel experts from both countries will focus on public diplomacy and soft power.

You can register to watch the live webcast this Friday at 2:00 p.m., here:
The NBA at Brookings on U.S.-China Relations »


The U.S.-China relationship is increasingly recognized as the world’s most important bilateral relationship. At the same time, it is a relationship regularly challenged by major crises, which the Obama and Xi administrations have each sought to moderate. The event will celebrate 35 years of diplomatic relations between two of the world’s superpowers, but will also address shortcomings and challenges in the years to come.