Economic growth across the continent is actively reshaping Africa’s historically underdeveloped insurance market according to a recent report by McKinsey and Company, which outlines the trajectory of the African insurance market’s growth and the potential for prodigious development of the sector. Currently the second fastest-growing insurance market in the world, trailing behind Latin America, the African insurance market was expected to grow, prior to the COVID-19 pandemic, at 7 percent per annum from 2020 to 2025. This projection placed the African insurance market’s growth at approximately twice the rate of North America, more than three times the rate of Europe, and slightly higher than Asia’s 6 percent growth rate. Furthermore, although the pandemic has upended consumer and commercial discretionary expenditures, including insurance, the report posits that the pandemic will delay, not alter, Africa’s insurance growth pattern, as well as accelerate the shift toward digital and remote platforms.

The African insurance industry currently holds a valuation of $68 billion as measured by gross written premiums, which the International Risk Management Institute defines as “the total premium (direct and assumed) written by an insurer before deductions for reinsurance and ceding commissions.” In comparison to other emerging markets, Swiss Re reports Latin America and the Caribbean contain a $157 billion insurance market, and Asia (excluding China) occupies a $194 billion insurance market in 2019. Moreover, Africa’s insurance market is highly fragmented and maintains inconsistent distribution among countries. For example, 91 percent of insurance premiums are concentrated in just 10 countries, the largest of which, South Africa, holds 70 percent of the market’s premiums. Beyond South Africa, McKinsey identifies six “primary insurance regions in Africa”: Francophone Africa, Anglophone West Africa, southern Africa, North Africa, East Africa, and Angola (Figure 1). Notably, North Africa’s market share, second-largest after South Africa’s, is nearly three times larger than all other regions’. 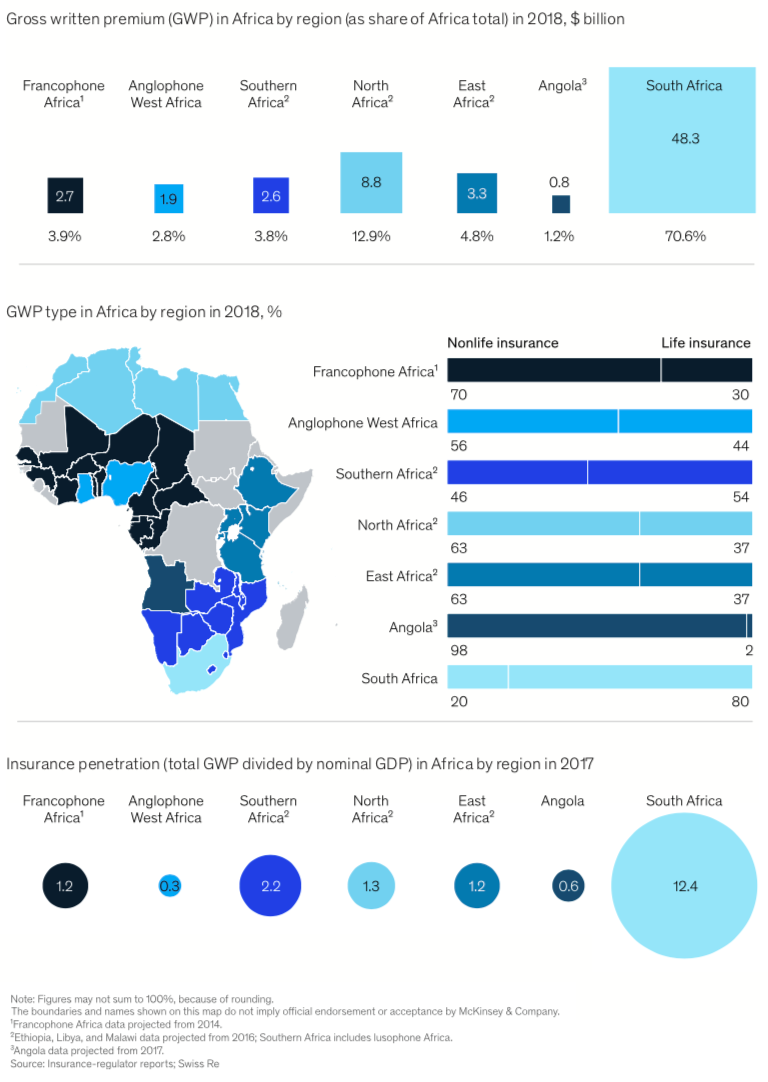 The composition of insurance products by region is also quite heterogeneous, as southern and Anglophone West Africa maintain a roughly even distribution between nonlife and life insurance products; nonlife insurance policies dominate the market in Francophone, North, East Africa, and Angola; and life insurance policies comprise the majority of South Africa’s insurance products. Market penetration, as measured by the value of insurance issuance (the gross written premium, or GWP) as a percentage of nominal GDP, in Africa is half of the global average and premiums per capita are 11 times lower than the global average. According to the authors, this low level of market penetration among all African regions, even South Africa, suggests that Africa’s double-digit growth in insurance issuance has been driven more by economic growth than intensifying market penetration.

Furthermore, the pandemic has accelerated the shift toward digitalization, which McKinsey researchers pose as a promising trend for augmenting insurance distribution. The rising demand for digital insurance products and solutions has been met by insurance technology innovations, startups, and mobile apps. These platforms aim to simplify, digitalize, and expand the insurance industry to penetrate deeper into the African market. Utilizing data collected by McKinsey’s Financial Insights Pulse Survey in June 2020 and a sample with over 700 respondents, the report authors predict that the pandemic-induced shift toward digitalization will have lasting impacts on consumer’s preferences.

McKinsey subsequently forecasts that, after the pandemic, consumers will utilize in-person and direct communication channels—such as physical visits to bank branches and phone calls or video chats with bankers—less frequently across all countries sampled. The McKinsey analysts perceive this trend as a positive development in accelerating insurance distribution in Africa.

Figure 2. COVID-19’s impact on the digitalization of financial products 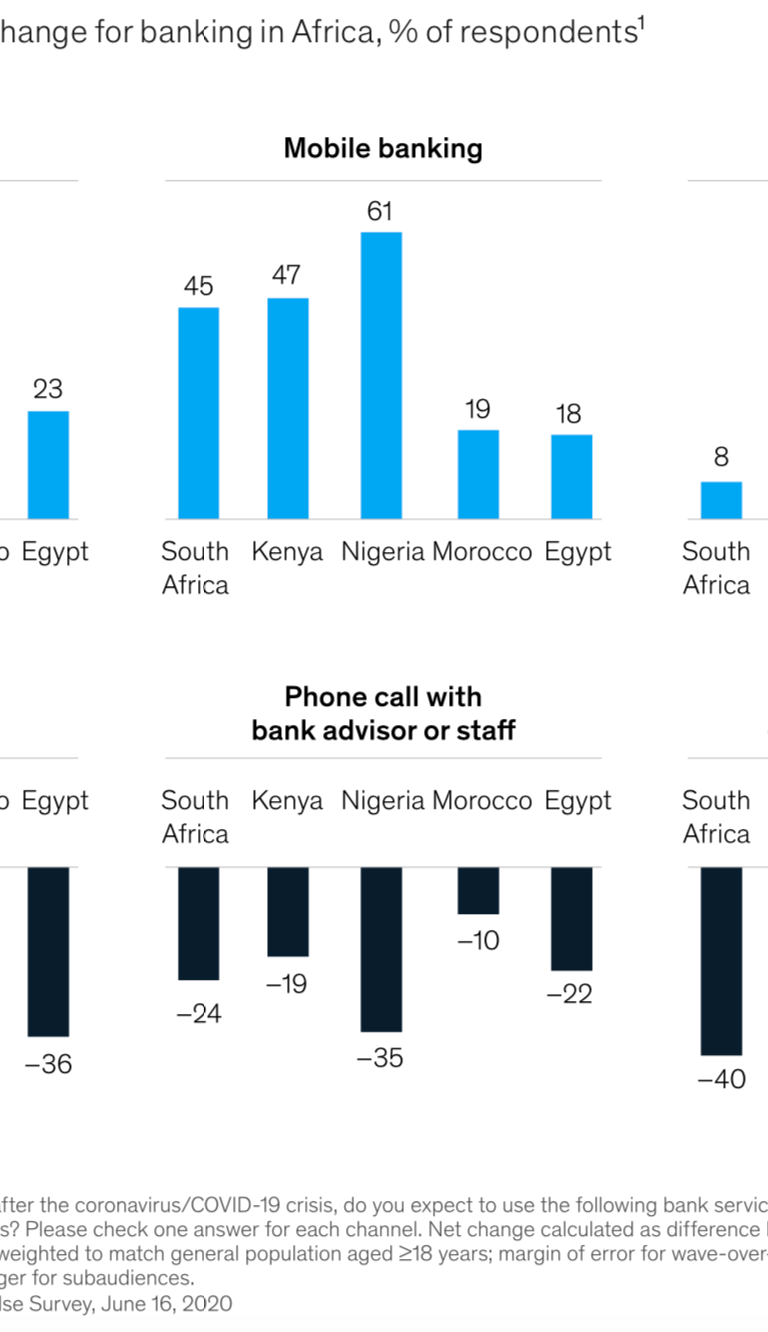 In addition to digitalization, the authors highlight four trends that will be pivotal for maintaining the growth in Africa’s insurance sector after the pandemic:

Although these trends emphasize the continent’s positive growth potential, hazards and challenges exist for any company looking to expand in the region. In response, the authors share five strategic considerations that may help insurance companies navigate their journey in Africa’s insurance market:

In the end, the authors write that although the pandemic’s economic disruption has imposed economic pressure and uncertainty, these findings suggest that Africa’s insurance industry’s growth remains solid.

For more on insurance in Africa, read “Cyclone Idai exposes the gap of disaster risk relief financing in Africa” and “An African-owned initiative to manage natural disaster and climate risks.”

For more on financial technology, innovation, and business in Africa, read “Beyond mobile payments: Going up the value chain of fintech in Africa” and “Unlocking Africa’s Business Potential: Trends, Opportunities, Risks, and Strategies.”

An African-owned initiative to manage natural disaster and climate risks

Beyond mobile payments: Going up the value chain of fintech in Africa