One of the major themes of the G-20 Summit last month was convergence: Since 1990, the growth of per capita income in emerging and developing economies has surpassed that of developed economies. According to Kemal Derviş, three factors have led to this trend: globalization (through trade and investment); high rates of investment; and strong human capital.

South Africa, despite having one of the strongest economies on the continent, has not been able to join that trend. So, as part of the Brookings Global Think Tank 20 series, we explored why South Africa is lagging behind and what the country can do about it. For our full brief, see here.

Importantly, while South Africa’s economic performance has remained quite similar to that of the fast-growing Asian economies, it has not conformed to the same general growth pattern. For example, GDP per capita levels in South Africa have not seen nearly the growth of its fellow emerging markets (Figure 1). So why, when South Africa shares so much in common with rapidly growing emerging markets and has one of the largest and most diversified sub-Saharan African economies, has the country failed to converge? 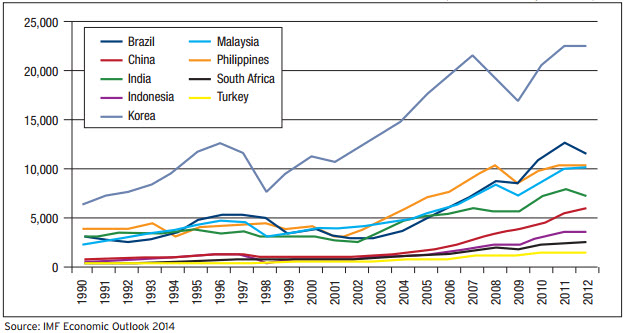 As it came out of apartheid in 1994, South Africa was one of the most unequal countries in the world, not only in income and wealth, but in social and physical infrastructure investment and human capital accumulation too. This inequality and the legacy of apartheid in general are major challenges South Africa continues to try to overcome.

In addition to such a difficult history, South Africa has not been as successful as other countries in attracting productive investment. With an average investment rate below 20.5 percent over 20 years, South Africa has witnessed a much lower rate of investment than other emerging economies; the average of which was 27 percent over that same period (see Figure 2). When South Africa did see investment, it was largely portfolio capital aimed at capturing strong returns in a high margin economy and not direct investment. In that way, investment was not transformed into that which could increase the output of the productive sector. Similarly, in terms of trade, South Africa’s dependence on short to medium capital flows tends to reproduce dependence on the resource sector. As such, the country’s export profile continues to be capital-intensive and driven by natural resources, resulting in relatively weak export diversification compared to emerging market peers.

The Demographic Dividend and Education

Unlike the rest of sub-Saharan Africa—where the working-age population is the fastest-growing in the world—South Africa is not experiencing a population boom. For example, Nigeria’s working-age population is growing at 3 percent per year, while South Africa’s is growing at only 0.6 percent. However, while it looks unlikely that South Africa will be able to capture growth associated with a fast-growing consumer market and a rising number of laborers, since South Africa is already experiencing a high unemployment rate, the lack of a demographic dividend might in fact be a good thing in that it doesn’t exacerbate that problem.

While population growth might not lead to convergence for South Africa, perhaps the country can rely on human capital, like many of the successful Asian economies have done. Unfortunately, South Africa’s educational system currently struggles to create the human capital foundation required for growth. As seen in Figure 3, South Africa is clearly at the bottom of the pack in math and science scores—between 26 and 28 percentage points lower than the global average. Robust statistical analysis, found in our brief, finds that the current South African educational system as a whole has either a weak or non-existent relationship with long-term economic growth. 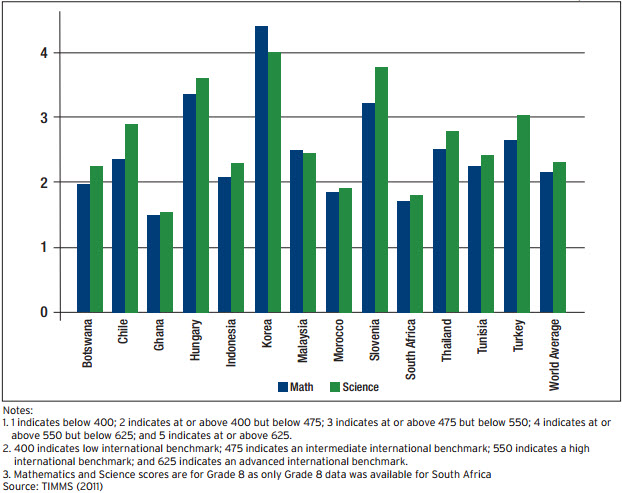 Thus, as we argue in our brief, “The above suggests, on the basis of low economic growth, a divergence from the growth trajectory of high-income economies and poor quality outcomes in human capital, and that South Africa’s economic growth path would be both uneven and highly unequal.” Unsurprisingly, then, top earners have seen their real per capita income rise by over 2 percent a year since 1995. In fact, since the end of apartheid, the poor (often quite dependent on social protection) have either seen no—or very little—increase in their incomes, while those in the middle of the income distribution have actually seen their incomes decline.

In our brief, we thus recommend policies to increase investment and savings—not government consumption, consumer credit extension and reliance on foreign inflows of portfolio investments. In addition, South Africa needs to invest in its human capital, not only in primary education but in secondary education and especially vocational training, to reduce its high unemployment level as well as open the doors for companies requiring skilled labor. Without intervention, South Africa will continue to diverge, not converge.