The G-20 Summit begins in Brisbane, Australia this Saturday, November 15. Leaders are descending on the city to tackle the biggest economic challenges facing the planet. A major theme of the discussions will likely be convergence—the rapid approach of average incomes in low- and middle-income countries towards those in advanced economies—and its sustainability. In a recent brief in the Brookings Global Think Tank 20 series, I explore this issue in the sub-Saharan African context, examining what has been holding the region back, how Africa might reach the rapid convergence seen by other emerging economies, and if and how convergence might be sustained. For my full brief, see here.

As most know, despite the “growth miracles” happening on the continent, sub-Saharan Africa still has a long way to go. Africa’s economic growth started much later and has gone much slower than the rest of the developing world; thus its per capita income gap against advanced economies still remains quite large. In fact, Africa hasn’t even converged with other emerging economies (see Figure 1). 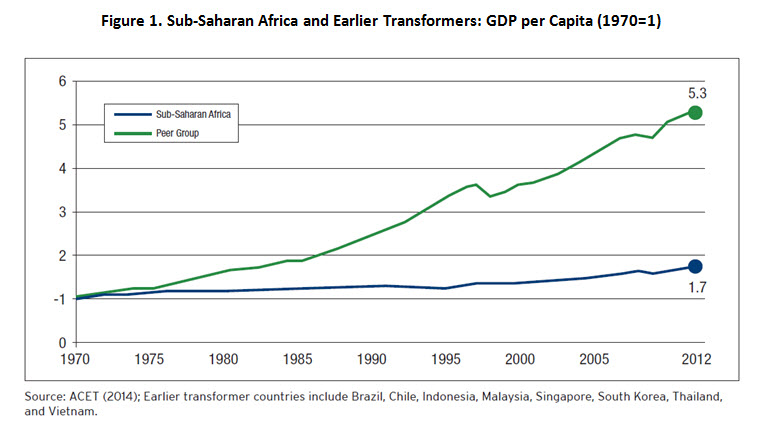 In addition to slow growth, Africa faces many, many challenges: Conflict-ridden countries still face a declining income per capita, and inequality is rampant. While Africa’s poverty rate is dropping, its share in global poverty is not: In 1990, 56 percent of Africans lived on under $1.25 a day, meaning that they represented 15 percent of those in poverty worldwide. Over the next 20 years, the region’s poverty rate dropped to 48 percent, but its share of global poverty doubled. At this rate, many predict that by 2030 Africa’s poverty rate will fall to 24 percent, but represent 82 percent of the world’s poor (Chandy et al., 2013).

Of the utmost importance for convergence, though, is the issue of structural transformation in the region. If sub-Saharan Africa can reduce its reliance on unproductive and volatile sectors, it will build a foundation on which economic growth—and convergence—can be sustained.

Currently, African economies are characterized by a reliance on natural resources, agriculture and a budding services sector. Natural resources are, and will likely continue to be, major drivers of Africa’s economic growth: About 20 African countries derived more than 25 percent of their total merchandise exports in 2000-2011 from them. Unfortunately, this dependence on natural resources comes hand-in-hand with challenges such as financial volatility, rent-seeking behavior, and a loss of competitiveness, among many others—making a turn away from them necessary for long-term, sustainable growth. Similarly, most African economies depend heavily on the low-yield agriculture sector—its least productive sector and with the lowest income and consumption levels.

While labor has been moving out of the agriculture sector, it is moving into the services sector. From 2000-2010, the agriculture labor force share fell by about 10 percent while services grew by 8 percent (McMillan and Harttgen, 2014). While much of the movement into the services industry has been into productive areas such as telecommunications and banking, most service sector jobs in sub-Saharan Africa are informal.  Although informal activities offer earning opportunities to many people, they are often unstable and it is far from clear that they can be an engine of sustainable and inclusive high economic growth. In addition, growth in the services sector overall has historically not shown the economic returns that industry has.

If policymakers can enhance productivity in the services sector, then growth could take off even more rapidly, but until then, the highly productive manufacturing sector will be the key to Africa’s convergence. (For more on this, see the attached PowerPoint presentation.)

Industrialization in Africa is low: Manufacturing–the driver of growth in Asia—employs less than 8 percent of the workforce and makes up only 10 percent of GDP on the continent (Rodrik, 2014). In comparison to the 8 percent growth in the services sector from 2000-2010, manufacturing saw only 2 percent growth (McMillan and Harttgen, 2014). In addition, the region’s manufacturing sector is dominated mostly by small and informal (and thus less productive) firms. Since the research has shown that industry was key to the explosive and continued growth in Asia and Europe, without concentration on or support of the manufacturing sector, African economies are not likely to replicate those convergence dynamics (Rodrik, 2014). Thus, Africa’s slow pace of industrialization means that, in addition to its late start time and its past sluggish growth, the region has another obstacle towards convergence.

There is hope, however; there are already hints that structural transformation might be happening. The recent rebasing of Nigeria’s economy revealed some important new trends. There, the contribution from oil and gas to GDP fell from 32 to 14 percent, and agriculture from 35 to 22 percent. At the same time, the telecommunication’s contribution sector rose from 0.9 to 9 percent, and manufacturing from 2 to 7 percent.

Achieving a successful economic transformation will help capitalize on improved growth fundamentals and achieve high and sustained per capita growth rates. However, for such a process to yield lasting benefits, it is crucial to better understand the ongoing structural changes taking place in Africa. This is an important task for economists studying Africa and, in addition to achieving a “data revolution,” both meta-analysis and case study methods can be useful complements to the current body of research on the continent.

How do recommender systems work on digital platforms?