Last month, Moody’s Investors Service assigned a debut sovereign rating of B1 to the government of Ethiopia. A B1 rating is equivalent to a B rating in Fitch Ratings’ scale, which is the agency that rates most African sovereigns. The rating puts Ethiopia on par with Rwanda but a notch below countries such as Kenya, Ghana and Zambia, all rated B+ by Fitch. Oil exporters such as Angola and Nigeria are rated better at BB-.

Moody’s Investors Service rating of B1 for Ethiopia is based on four main key drivers: (1) the country’s small economy and low per capita income, balanced by a track record of strong economic growth over the past decade; (2) weak institutional setups in comparison with B-rated countries; (3) moderate fiscal strength, with debt burden and related financing costs remaining low given a largely concessional funding base balanced by its increasing reliance on non-concessional financing; and (4) moderate susceptibility to event risk, which balances credit strength and credit constraints.

Ethiopia’s sovereign rating is an indicator of its government’s ability and willingness to repay its debt. Typically, obtaining a sovereign rating is a precursor to a government’s access to international debt markets. However, the Ethiopian government announced late last year that it would be seeking a sovereign credit rating to attract foreign investment rather than to issue debt. Unlike international borrowing, foreign direct investment (FDI) puts little or no burden on public finances, is less volatile than portfolio flows, and is more likely to increase economic growth.

As one of the fastest growing African nations, with a population of over 85 million, an expanding middle class, growing urbanization and a budding green energy sector, Ethiopia has large potential for attracting FDI (Figure 1). In addition, increased FDI would help finance Ethiopia’s worsening balance of payments (Figure 2). It should also lead to higher economic growth if accompanied with the right measures, especially those leading to a deeper and well-supervised financial sector and those improving governance. 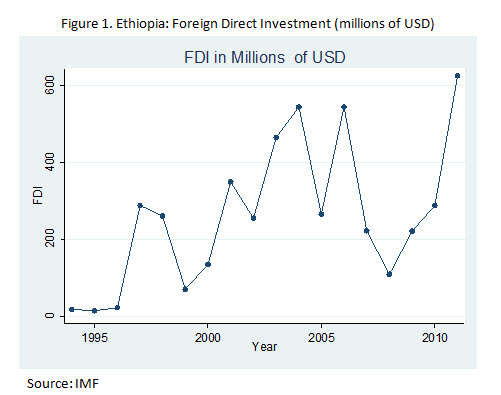 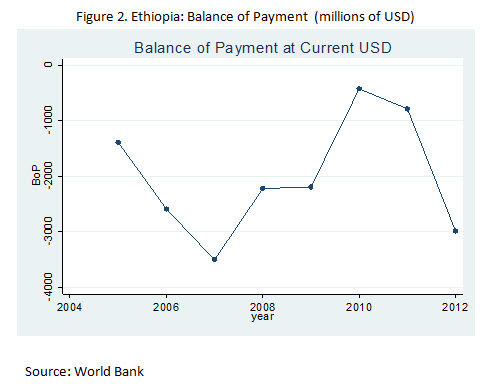 To understand the importance of the need to increase foreign investment to Ethiopia, it is useful to review the country’s current policy environment. Ethiopia follows a public sector-led development strategy based on high public investment under its Growth and Transformation Plan (GTP). Reports from the Ethiopian government and international financial institutions like the International Monetary Fund indicate that under the GTP, Ethiopia has made considerable progress in terms of economic growth, poverty reduction and stabilizing inflation. However, the GTP requires huge investments that the country cannot generate domestically. In the absence of sufficient domestic funding for large scale projects, Ethiopia will have to rely heavily on FDI to achieve the objectives of the GTP.

Some studies indicate that, for sub-Saharan African countries, obtaining a credit rating has a positive and significant impact on attracting FDI. This trend is not surprising as credit ratings are explained largely by a few, mainly macroeconomic, indicators. In general, though, additional factors drive FDI depending on whether investments are market-seeking (driven by economy size and country location), efficiency-seeking (driven by human capital or infrastructure quality) or resource-seeking (driven by the availability of natural resources or other strategic assets). Attracting FDI also depends on a country’s institutional and regulatory frameworks, which include judicial independence, labor market flexibility, corruption, level of indirect tax rates on foreign firms and business regulations.

Ethiopia’s record on a number of these factors is at best mixed—hence the B-rating. In our view, the Ethiopian government should quickly draw the lessons from its recent experience in attempting to attract FDI. We focus on the following five issues:

First, critics of the macroeconomic policy of the Ethiopian government often cite the former misguided policy of continuous currency devaluation, as the major reason for the current macroeconomic imbalances in Ethiopia. Instead of inducing export growth, past devaluations aggravated inflation, in part because of the nature of export items and the limited role of the domestic private sector in the economy.

Second, Ethiopia’s policies to attract foreign investment in the agriculture sector have faced some challenges. Thanks to government incentives, foreign investors started leasing vast areas of agricultural land—a trend that is often criticized as a “land grab.” Environmentalists and human right groups have also objected to these policies, citing the associated risks of environmental degradation and human displacement. Investors were given huge tracts of forested land in southwestern Gambella in western Ethiopia at very low lease rate of $1 per hectare per annum. So far, the record of these ventures and other similar foreign investments in agriculture are, at best, mixed to say the least. Thus, Ethiopia’s efforts in encouraging FDI in agriculture have not yet led to higher exports.

Third, the government’s recent strategy to attract foreign investment in urban areas is also facing challenges.  The government has recently focused on attracting investment to cities located around the capital Addis Ababa in Oromia regional state. The new “master plan” may lead to the displacement of more than 6 million inhabitants without compensation. The government is being accused of violently repressing fierce public protests in Oromia against this policy. Moreover, the government is also attempting to attract FDI by leasing large areas of farmland, displacing farmers in the vicinity of Addis Ababa, to flower companies. Again, concerns have arisen about the displacement of farmers and their compensation.

Fourth, the institutional environment remains challenging. There is an economic and political polarization of the majority not affiliated with the ruling party; growing youth and female unemployment rates; and a widening income gap between the poor and the emerging rich. These factors aggravate the pre-existing grievances of the marginalized and vulnerable poor. Moreover, there are concerns that antiterrorism rules and draconian media laws are mainly being used to crack down political opponents. Rampant corruption also increases the cost of doing business, while the restrictive rules that regulate civil society organizations narrow the political and economic space needed to enhance economic growth. These could be some of the reasons why the World Bank’s 2014 Doing Business report ranks Ethiopia 125 out of 189 countries.

Fifth, in contrast to most of sub-Saharan Africa, Ethiopia won’t allow foreign investment in services such as banking, telecommunications and other industries monopolized by the state or restricted to only Ethiopian companies. Sectors that typically attract foreign investors—and which have attracted the lion’s share of FDI on the continent induced by high demands associated with rising income—are closed to them. This policy will limit the efficacy of the credit rating because other areas such as agriculture have not so far proved attractive to foreign investment.

Given the difficult institutional environment, Ethiopia appears to be increasing its reliance on foreign investment to specific sectors (like land) or from specific regions (China, which accounts for 20 percent of total FDI in 2010 and rising). In addition to reducing the size of the public sector and giving more space for the Ethiopian private sector to develop, the government of Ethiopia should definitely take a second look at the determinants of foreign investment mentioned above if it wants to succeed in attracting FDI sustainably, in more sectors, and from more types of investors. At the end of the day, the goal should be for FDI to also lead to higher economic growth. But not all FDIs are equal in this regard, as shown by the poor record of African natural resource-rich countries. Ethiopia, which is resource poor, can pave the way on how African countries can attract FDI beyond those related to oil, gas and other extractive industries.

Figure of the week: Education participation rates in Africa increase, with some caveats