Japanese Prime Minister Shinzo Abe completed his African tour this Monday in Ethiopia after visits to Côte d’Ivoire and Mozambique. His visit was the first tour of Africa by a Japanese leader in eight years and the first visit to a francophone West African country. Thankfully, this low frequency of visits to the continent by Japanese leaders does not pay justice to Japan’s involvement in Africa.

According to official aid statistics (which excludes China), Japan is the fifth largest bilateral official development assistance (ODA) donor to Africa after the U.S., France, the U.K. and Germany. Japanese ODA to the continent averaged about $1.8 billion per year in 2008-2012—double its 2003-2007 level (see Figure 1).  These figures do not include Japan’s aid to Africa through some multilateral donors such as the World Bank. 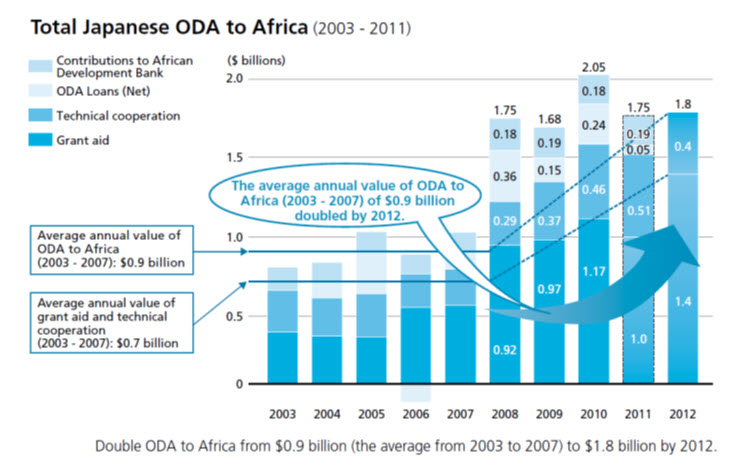 For the past 20 years, Japan’s main roadmap for its assistance to Africa has been charted by the TICAD (Tokyo International Conference on African Development). The TICAD is a global forum between Japanese and African head of states and is held every five years. It is co-organized with the U.N., the UNDP, the World Bank and the African Union Commission.  In principle, the TICAD advocates “Africa’s ownership” of its development and the “partnership” between Africa and the global community. It also serves as an accountability framework. Africans have also become familiar with the JICA  acronym (Japan International Cooperation Agency) and may have seen young Japanese men and women from the JOCV (Japanese Overseas Cooperation Volunteers). Up until last year, most of Japan’s focus on Africa under TICAD IV was on traditional aid targets (infrastructure, agriculture, water and sanitation, education, and health, as well as peace keeping operations: Japan has provided 400 self-defense forces personnel as part of the U.N. mission in South Sudan).

But Japan’s involvement in Africa is now at crossroads.  TICAD V, which was held in Yokohama in June 2013, added a new element: private sector involvement. As Prime Minister Abe put it in his opening address at TICAD V, “What Africa needs now is private sector investment, and public-private partnership leverages that investment.” In Yokohama, the prime minister committed to support African growth over the next five years, through not only $32 billion in ODA but also $16 billion of “other public and private resources.” He also mentioned $2 billion of trade insurance underwriting.  These funds will be targeted to areas that were identified in consultation with African countries, including infrastructure, capacity building, health and agriculture.

So Prime Minister Abe’s recent African trip is in in line with TICAD V. It is therefore not surprising that business leaders joined the trip and that $570 million in loans to gas-rich Mozambique were announced.

With this in mind, it is encouraging to see that two of the stops in the Japanese prime minister’s visit took into account regional integration in the continent. In Addis Ababa, the prime minister gave a speech at the African Union headquarters. His intervention was mostly focused on the need to maintain peace and security on the continent, and he pledged about $320 million for conflict and disaster response, including $25 million to address the crisis in South Sudan and $3 million to the one in the Central African Republic. Earlier, in Abidjan, Côte d’Ivoire, Abe met heads of state and government of the Economic Community of West African States (ECOWAS).

In short, Prime Minister Abe’s visit heralds a new type of relationship between Japan and Africa. Japanese engagement with African countries will involve the private sector much more than previously. It is up to African policymakers to seize this opportunity to meet the continent’s transformational agenda.