More than in past economic downturns, state and local governments were a prominent casualty of the recent recession. States in particular saw their revenues plunge. Although state taxes have been rebounding, local property taxes have dipped, consistent with a two- to three-year lag between home prices and property tax rolls. These reductions coincide with state cutbacks in local aid, further squeezing local budgets.

These are critical issues because states and localities perform most of the activities we commonly associate with government. They undertake most direct spending on public goods and services (including their expenditures from federal funds), and they bear primary responsibility for investments in education, social services, and infrastructure that directly affect our national economy and quality of life. States and localities are also key economic players, comprising 12 percent of Gross Domestic Product (GDP) and employing 1 out of 7 workers – more than any other industry, including health care, retail sales, and manufacturing.

How much did state and local revenues decline during the downturn? State and local revenues often decline in an economic downturn, but federal grants may help to offset these losses. In particular, in this recession, the American Recovery and Reinvestment Act of 2009 (also known as ARRA or simply “the stimulus”) directed unprecedented fiscal relief to states and localities. In light of this response, we will ask whether the recent downturn was a truly “great” recession in the sense that, relative to prior downturns, it entailed a more substantial decline in total state and local government revenues.

To what extent did pressures for state and local spending escalate? A hallmark of economic downturns is that, just as revenues decline, demands for many types of spending, particularly those involving public welfare, intensify. We will thus ask whether the state and local public sector experienced a bona fide “great” recession in terms of not just revenues but also spending pressures.

How did state and local governments respond? In general, when governments face an operating deficit or a projected gap between revenues and expenditures, they can raise revenues, cut spending, or draw down budget reserves to close the gap. We will ask which of these responses were most frequently adopted.

Finally, the brief concludes by suggesting how states and localities might respond to ongoing fiscal and economic pressures, including looming federal deficit pressures and possible threats to tax provisions and spending programs benefiting state and local governments.

A Primer on State and Local Government Finance 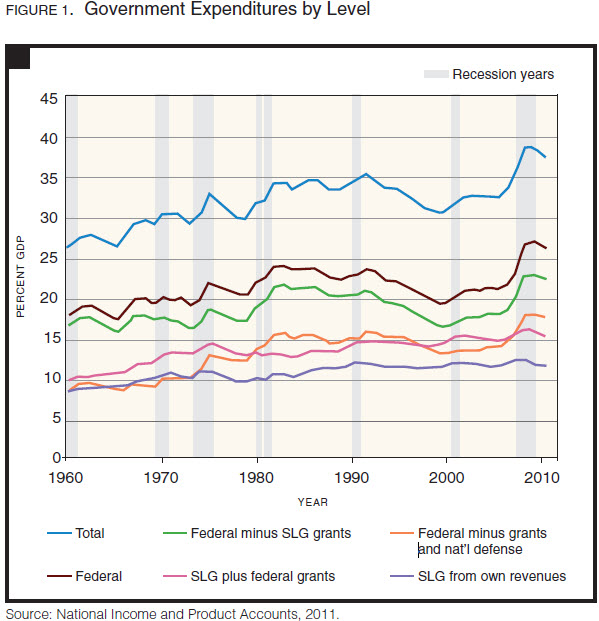 Figure 1 also shows that there are several years in which states and localities outspent the federal government by this measure. In fact, since 1960, federal spending excluding intergovernmental grants and national defense has averaged 12.9 percent of GDP, compared to state and local spending of 13.3 percent. Thus, states and localities have on average eclipsed 2 State and Local Budgets and the Great Recession the federal government when it comes to direct spending on goods and services in this country.

To support their activities, state and local governments rely on a variety of income sources. Their main source of revenue is taxes. States predominantly tax income and sales, while localities depend on property taxes. Both types of governments also levy fees and service charges and receive grants from other levels of government.

The state and local public sector’s largest expenditure items are education, public welfare, health, and hospitals. Together, these categories accounted for roughly two-thirds of all state and local government spending in fiscal year 2009-2010. As we will later see, they were also the budget categories most affected by the Great Recession.

A Sharp Decline in Revenues?

First, we turn to the question of what happened to state and local revenues in the Great Recession. As shown in figure 2, state taxes rose at the beginning of the recession, but they began falling in the fourth quarter of 2008. Sales taxes were the first to fall, but income taxes ultimately fell harder and faster. At their low point in the second quarter of calendar year 2009, state taxes were 17 percent below their level one year earlier and personal income taxes were 27 percent lower. 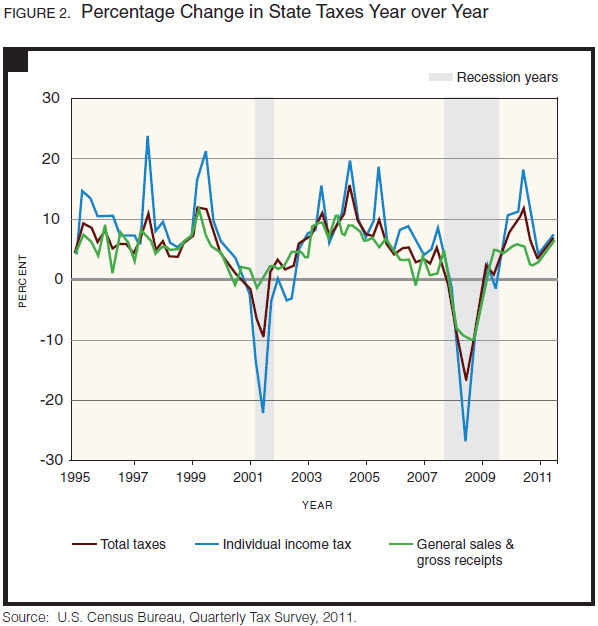 More recently, state tax revenues have been rebounding. Taxes rose by 3 percent in the second quarter of 2012 compared to one year earlier, making it a tenth quarter of consecutive growth after five straight quarters of decline in the recession. Nevertheless, state tax growth has been uneven across states, and recent evidence suggests that it is moderating.

To put these trends in perspective, consider total state and local “own-source receipts,” which include all income sources except federal grants (that is, taxes, service charges, and so forth). Figure 3 shows that these receipts fell by roughly $100 billion in real terms from 2007 to 2009. This drop was deeper and more sustained than in previous downturns, including a pair of back-to-back recessions in the early 1980s. 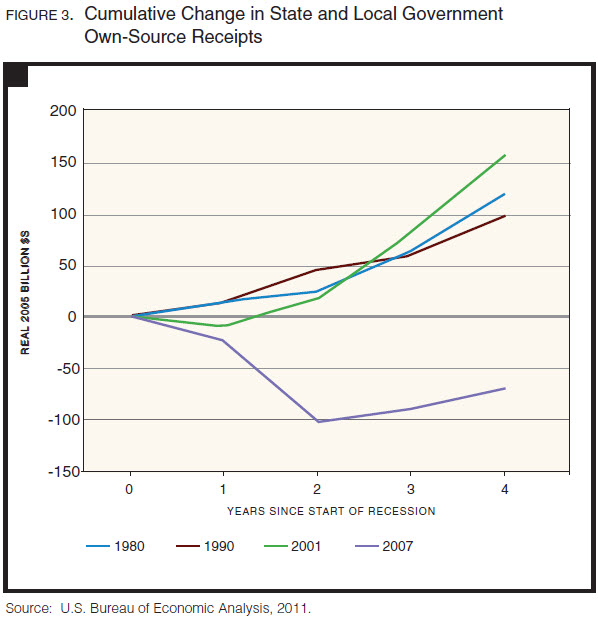 The federal government transferred unprecedented fiscal relief to states and localities during the Great Recession and its aftermath. In particular, the 2009 stimulus package appropriated $145 billion to help states fill their budget gaps. The stimulus also provided additional payments for highways and other infrastructure as well as education and programs 3 State and Local Budgets and the Great Recession oriented toward individuals affected by the recession. Still, federal funds did not offset state and local revenue losses (figure 4), and the stimulus programs have now expired. 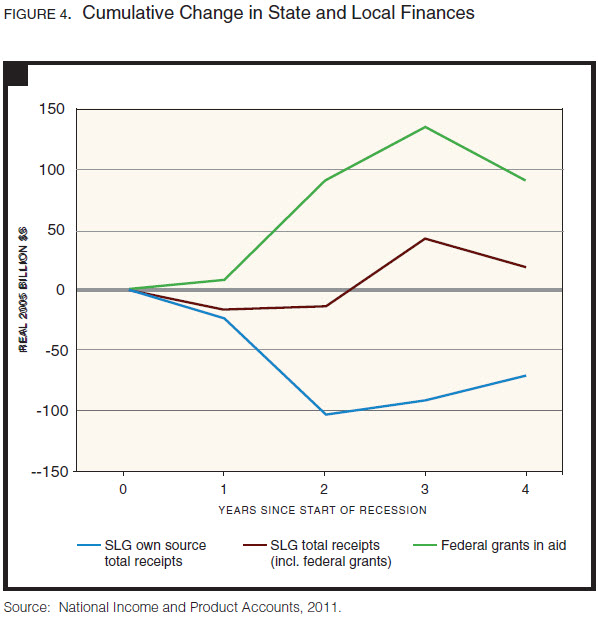 To What Extent Have Spending Pressures Escalated?

We now consider the Great Recession and spending pressures. Figure 5 shows that caseloads for public programs indeed continued or escalated in the downturn. In particular, enrollments climbed for Medicaid, Unemployment Insurance, and higher education from 2007 to 2009. As a result of these pressures and revenue declines, large budget gaps opened in nearly every state, including a record number of states (43) that confronted shortfalls in the middle of a budget cycle, necessitating further actions beyond those already taken (see figure 6). Overall, states faced more than $500 billion in cumulative shortfalls from 2009 to 2012. 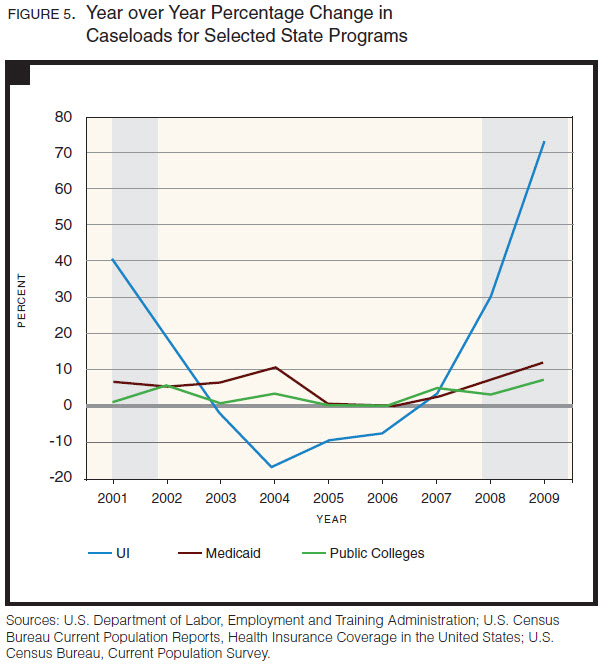 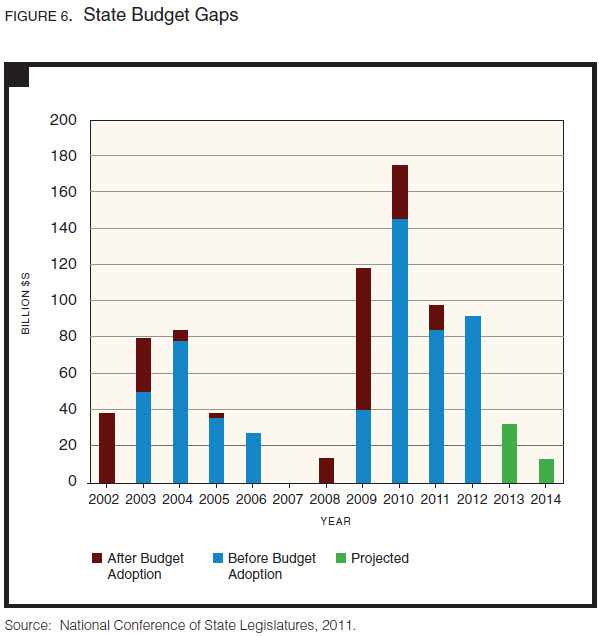 How Did States Respond?

Unlike the federal government, state and local governments are generally expected to balance their budgets. Indeed, many states are constitutionally prohibited from carrying a deficit forward into the next fiscal year. Thus, in addition to relying on enhanced federal funds, states and localities typically raise revenues, cut spending, or draw down reserves to close projected budget gaps.

Despite its severity, states relied less on revenue increases as a solution in the recent downturn. Although tax and fee increases in fiscal year 2009-2010 were the highest on record ($23.9 billion), this was in nominal terms and not as a percentage of prior year collections (figure 7). In all, 40 states enacted tax or fee hikes between fiscal years 2008-2009 and 2010-2011. The largest increases occurred in California and New York (accounting for about half of the total over this period). Some states (Ohio, Indiana, North Dakota, Missouri, Alabama, Wisconsin, Louisiana, and Michigan) also cut taxes. 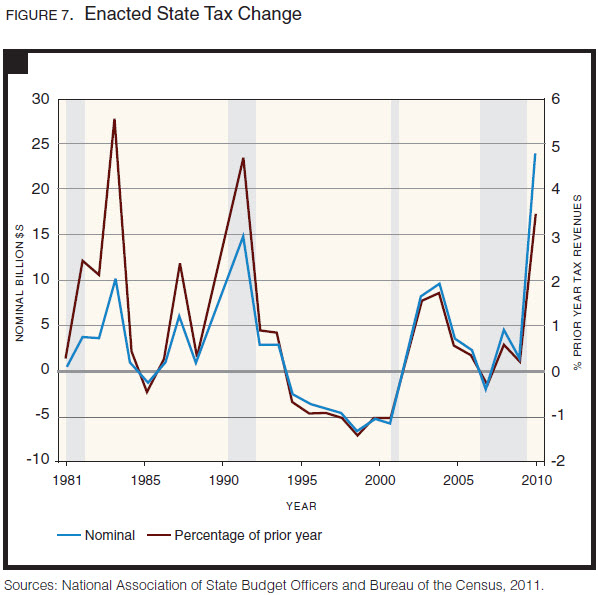 Most states cut spending. Cuts fell predominantly in education, health, and social services, where states also dedicate most of their budgets. Between fiscal years 2008-09 and 2010-11, the Center on Budget and Policy Priorities reports that 34 states reduced expenditures on K-12 education, 43 cut college and university expenditures, 31 lowered health care expenditures, 29 cut services to the elderly and disabled, and 44 reduced employee compensation.

The effects of state and local spending cuts are evident in declining public sector payrolls. Overall, state payrolls declined 2.6 percent (137,000 jobs) and local payrolls 3.3 percent (437,000 jobs) between August 2008 and September 2012. Most state job losses occurred outside of education, while local job losses were spread across education and other areas. These cuts have continued more than 4 years since the start of the recession (see figure 8). It is this persistence of state and local job cuts that makes the Great Recession quite distinctive compared to past recessions. According to the Bureau of Economic Analysis, state and local governments have been exerting a net drag on national economic growth since the end of 2009. 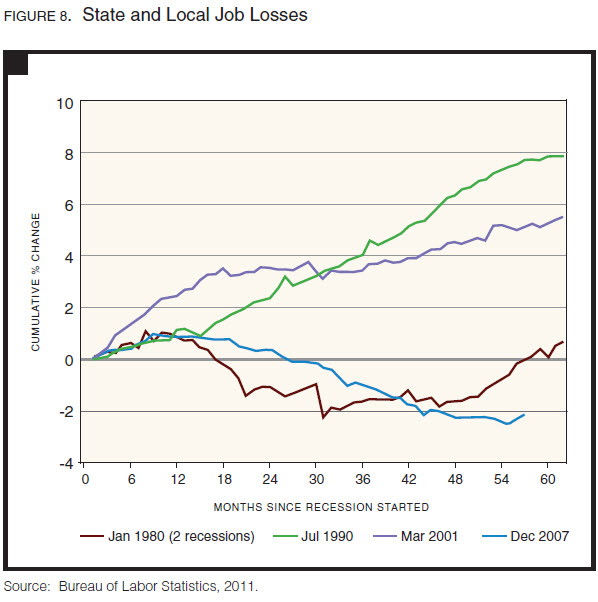 States are gradually emerging from the Great Recession as evidenced by improving tax collections. However, revenue gains have been uneven across states, and the pace of growth appears to be slowing. Moreover, given the sheer size of the state budget gaps faced during the recession, governors and legislators have been understandably reluctant to commit new revenues to ongoing spending. At the same time, local revenues are ebbing due to lagged effects of the housing bust and cutbacks in state aid.

Looking ahead, states and localities will experience ongoing fiscal pressures due to the slow economic recovery as well as federal discretionary spending cuts scheduled for next year under last year’s debt deal. Although major spending programs, such as Medicaid, are exempt from these cuts, they will likely be on the table in negotiations over any long term federal deficit reduction package. And so too will be tax provisions benefiting states and localities.

Meanwhile, states and localities will confront their own longterm fiscal challenges. The Government Accountability Office has projected that, by 2060, the gap between state and local revenues and spending will be as high as 2-4 percent of GDP, with the principal source of the gap being rising health care costs and aging populations. Other experts have calculated a more than $3 trillion state and local public pension funding shortfall.

A potential silver lining to the Great Recession and ensuing budget crises is that many state and local governments were forced to reexamine their tax systems and service priorities. Several renegotiated labor agreements and engaged citizens in productive conversations about tradeoffs. These steps may be fruitful over the long term as all levels of government are forced to show a tighter connection between revenues raised and services delivered.

Gordon, Tracy. 2012. What States Can, and Can’t, Teach the Federal Government about Budgets. Washington, DC: The Brookings Institution. Available at: https://www.brookings.edu/research/papers/2012/03/states-budgetsgordon