In July 2021, U.S. President Joseph Biden announced the adoption of an “over the horizon” counterterrorism strategy. The new plan would rely on armed unmanned aerial vehicles — or drones — to respond to terrorism threats around the globe without deploying American boots on the ground. But although the strategy was designed to overhaul policies that had kept the United States embroiled in conflict for 20 years, it failed to address the unintended consequences of counterterrorism strikes, namely civilian casualties. On August 29, 2021, with most U.S. soldiers withdrawn from Afghanistan and regional bases shuttered, this challenge became clear. The U.S. military conducted a strike that killed 10 civilians, including women and children, rather than the intended target.

A recent report suggests that the botched strike is indicative of a larger trend. Based on 3,000 documents disclosed by the Pentagon, the study alleges to have identified “an institutional acceptance of an inevitable collateral toll” during U.S. strikes. Indeed, widely available data reflects the prevalence of civilian casualties resulting from U.S. strikes against suspected terrorists. According to the Bureau of Investigative Journalism (BIJ), for instance, U.S. strikes in Afghanistan, Pakistan, Somalia, and Yemen from 2002 to 2020 killed between 10,000 and 17,000 people. Of these, between 800 and 1,750 are thought to have been civilians.

What the data doesn’t show is variation in the targeting standard for U.S. strikes over time. That is, the data obscures the number of civilian casualties deemed acceptable during any given strike, which is a politically motivated calculation that shapes the overall rate of killing.

Between 2011 and 2013, the Obama administration implemented a “near certainty” standard of no civilian casualties during strikes in undeclared theaters of operations. The policy shift enabled Obama to instill higher degrees of morality and legality into the drone strike approval process, which was also important to rehabilitate the United States’ image abroad given its “quasi-secretive” use of drones. Shortly following his inauguration in 2017, former U.S. President Donald Trump relaxed Obama’s restrictive targeting protocol in favor of the more permissive “reasonable” certainty standard for civilian causalities, initially adopted by the Bush administration. Our research suggests that Obama’s policy shift drastically reduced civilian casualties in Pakistan, offering a possible guidebook for how to minimize the type of civilian deaths witnessed in late August. 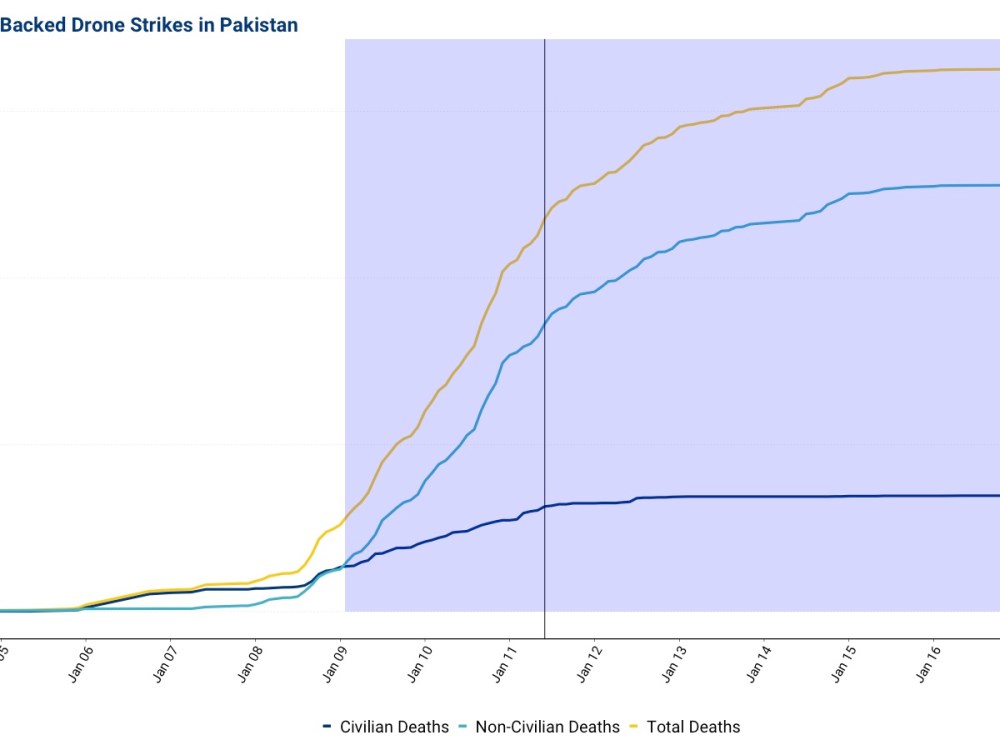 This graph displays cumulative total, civilian, and combatant casualties from 2002-19 using data retrieved from the BIJ. The plotted values represent the midpoint of minimum and maximum casualty estimates provided by the BIJ data. The blue shading coincides with the Obama administration, which adopted the near certainty standard in 2011, according to our research resulting in a dramatic reduction of civilian casualties during U.S. strikes in Pakistan.

Why the current drone strategy should change

Armed drones have been a signature of U.S. foreign policy since 9/11. The United States has used strikes in both “declared” theaters of operations such as Afghanistan and Iraq, as well as “undeclared” theaters of operations including Pakistan, Somalia, and Yemen. Military actions in these latter areas are neither sanctioned by the United Nations nor have U.S. forces deployed on the ground. As such, strikes in undeclared theaters of operations constitute what one scholar refers to as “pure” drone warfare. Strikes are not used in support or defense of U.S. soldiers, in other words, but constitute a veritable strategy to disrupt, destroy, and defeat terrorist groups.

While these strikes actually enjoy strong public support, they often lack transparency. They also raise questions about violations of sovereignty, even though the targeted countries’ political leaders often approve of them. Criticism from non-governmental and international organizations, such as Amnesty International and the United Nations, peaked during Obama’s first term in office due to his expansion of strikes. Obama authorized strikes in undeclared theaters of operations at 10 times the rate of Bush, reflecting a belief that drones were a “cure-all for terrorism.” The most visible uptick of strikes took place in Pakistan, where civilian casualties reached 10 percent of total deaths at one point.

In response to a growing chorus of criticism, and to help enhance his reelection prospects, Obama directed a policy review. He reportedly “pushed his staff to come up with a complex set of rules and legal structures to make sure each strike comported to the rules of law.” On May 23, 2013, Obama formally announced a policy to exercise greater oversight of strikes, by imposing a near certainty standard for no civilian casualties during strikes in undeclared theaters of operations. Effectively, the policy articulated Obama’s zero tolerance for civilian deaths during U.S. strikes.

Unlike strikes in Somalia and Yemen, which were sometimes used under a more permissive standard of collateral damage to defend U.S. forces confronting terrorists, strikes in Pakistan after adoption of the policy were governed by the near certainty of no civilian deaths. By this time, a Pew Research Center poll showed that 94 percent of Pakistanis thought that U.S. strikes in Pakistan were killing “too many” civilians. In part to help manage the public relations fallout, the Obama administration conditioned the approval of strikes on four requirements: A strike would be approved after demonstrating (1) a target constituted a “continuing imminent threat to U.S. persons”; (2) infeasibility of capturing the target; (3) near certainty of target identification; and, (4) near certainty of no civilian casualties.

How we measured the effects of the near certainty standard

To what extent did Obama’s policy reduce civilian casualties? We studied this question using a quasi-experimental method that exploits a sharp break in the trend of outcomes at the point of policy implementation. This method mimics a randomized experiment by observing the period before a policy goes into effect as the counterfactual (or control) to the treated observations. We satisfy three methodological assumptions to estimate the effect of Obama’s policy.

First, we assume that strikes are “as-if” random, meaning that the exact timing of strikes is never foreseen and is not foreseeable. Research by Anouk Rigterink of Durham University shows that strike “hits” and “misses” are quasi-random. Other studies by Patrick Johnston and Max Abrahms also suggest that while the decision to use strikes may not be random, the results of strikes are based on chance. It may be the case, for instance, that the timing of a strike depends on whether the drone has a mechanical glitch or not. These explanations comport with research about the randomness of bombing in war.

Second, we assume that civilians do not “select into treatment,” meaning they do not voluntarily put themselves in a position to be killed by strikes. Rather, drones grip civilians with fear, causing them to make dramatic lifestyle adjustments to avoid being targeted.

Finally, we use multiple statistical tests to find a sharp break or discontinuity in the trend of civilian casualties two years before Obama’s official policy announcement, which corroborates our interviews with senior Obama-era officials. This means that the near certainty standard was actually the result of intensive deliberations starting as early as 2011 and not Obama’s speech at the National Defense University in Washington, D.C. in May 2013.

Given these assumptions, we used data from the BIJ to run our analysis. The data captures the universe of U.S. strikes in Pakistan from 2002-20. The data reflects 430 U.S. strikes, from which we retrieved estimates for civilian casualties. Before the policy implementation, the Obama administration conducted 263 strikes resulting in 607 civilian casualties. After adopting the near certainty standard, the Obama administration conducted 167 strikes that killed 90 civilians.

For our main analysis, we aggregated our sample at the country and month level. While a narrower — daily or weekly — bandwidth may provide leverage over the effectiveness of individual strikes in terms of follow-on terrorist attacks, it does little to inform the merits of a policy designed to reduce civilian casualties over time. We took the midpoint of the minimum and maximum estimates for civilian casualties as our outcome variable, following previous studies.

The triangles represent projected civilian deaths had Obama not implemented the near certainty standard. Real civilian casualty figures are displayed as diamonds. Civilian casualties are averaged random draws from a 5,000-iteration simulation at the strike-level, aggregated to monthly totals for visualization.

What this means for U.S. counterterrorism strikes

After assuming the presidency, Biden ordered a review of U.S. strikes. Pending the outcome, Biden elected to impose temporary limits, akin to Obama’s near certainty standard. Instead of delegating strike approval to tactical commanders, as was done in the past, Biden centralized targeting decisions within the White House (the August strike appears to have been an exception).

If our research is any guide, these policy decisions are likely to matter. We show in a study of U.S. strikes in Pakistan that the adoption of stricter targeting guidance starting in 2011, which was officially codified in policy by 2013, significantly reduced civilian casualties. Our findings have implications that can help shape U.S. drone use going forward.

First, a heightened level of political scrutiny puts the United States in a better position to protect soldiers and civilians while minimizing casualties. Other countries that use drones similarly, such as France in Mali, have shown that enhanced oversight is key to capitalizing on the dividends of drones, while protecting against potential criticism.

Of course, broader targeting controls require important political and military trade-offs that officials may be unwilling to make. One policy analyst we interviewed cautioned that an unintended consequence of Obama’s near certainty standard was “missed opportunities” to strike terrorists. While this counterargument is difficult to confirm, it echoes earlier assessments provided by intelligence officers responsible for implementing the Obama administration’s near certainty standard. Assuming this is true, an added benefit of the near certainty standard, then, is that it compels officials to prove that opportunities have, in fact, been missed.

Second, it is likely that adopting the near certainty standard during strikes in declared theaters of operations can help prevent civilian casualties, too. Admittedly, weighing non-combatant immunity ahead of military necessity may expose soldiers to additional battlefield risks by restricting commanders’ use of strikes for close-air-support, which is designed to defend U.S. forces in combat. For many war theorists, this is precisely the added risk that reflects soldiers’ martial virtue. Some military officials have attempted to align military operations against this logic. Retired U.S. Army General Stanley McChrystal proposed a valor award for “courageous restraint” while leading counterinsurgency operations in Afghanistan to help institutionalize soldiers’ heightened liability to be harmed while protecting civilians. Many defense leaders, however, do not endorse tying commanders’ hands to protect U.S. forces. McChrystal’s initiative ultimately failed because it achieved his intent too well: greater numbers of civilians were saved, but at the price of more U.S. casualties.

If the past is prologue, we suspect the Pentagon will object to stricter targeting protocols on strikes in declared theaters of operations, despite the incontrovertible gains for civilian protection suggested by our analysis. Indeed, the inevitably of targeting errors in combat suggests that a stricter certainty standard could meet the intent of officials who admit that the U.S. “must work harder” to reduce civilian harm during strikes. At the very least, our study suggests that the Biden administration should consider adopting a near certainty standard in undeclared theaters of operations, to prevent civilian casualties during counterterrorism strikes. Failure to implement such a standard will continue to impose direct and largely avoidable risks on civilians during U.S. strikes abroad.

The views expressed in this article are those of the authors and do not necessarily reflect the official policy or position of the United States Department of the Army, Department of Defense, or Government.

US faces immense obstacles to continued drone war in Afghanistan

Death from above: How criminal organizations’ use of drones threatens Americans

Military history for the modern strategist: America’s major wars since 1861