Thank you Chairman Casey, Vice Chairman Brady, and members of the Committee for inviting me here today.

My name is Michael Greenstone, and I am the Director of The Hamilton Project at the Brookings Institution, and the 3M Professor of Environmental Economics at the Massachusetts Institute of Technology. I am honored to have the opportunity to speak with you today about America’s energy choices, as prompted by the repercussions of potential refinery closures on the East Coast.

Thanks in part to an economic infrastructure heavily dependent on energy use—roads and highways, ports and railways, broadband and computer networks, manufacturing plants and shipping facilities—American workers and businesses are among the most productive in the world and the most globally integrated. One innovation after another over the centuries, fueled by cheap and plentiful energy from coal, oil, and natural gas, has allowed the nation’s economy to transition from one based on agriculture to one based on high-value-added manufacturing and services aided by computerization. Our standard of living—among the highest on earth—would simply not be possible without energy and the systems that have been developed to harness it.

The potential closures of petroleum refineries on the East Coast have led to speculation that energy prices may rise, possibly dramatically in some instances. This hearing provides an important opportunity to consider our energy choices more broadly. Specifically, it provides a moment to remember that our energy sources often come bundled with costs that go beyond what we pay at the pump or in our electricity bills and that sound choices involve recognizing all costs.

The discovery of vast amounts of natural gas shale resources in the United States and the advancement of drilling technologies that allow us to develop these resources have dramatically changed our country’s energy situation. Over the course of the last decade, U.S. natural gas prices have plummeted while petroleum prices have increased significantly. As you can see from the figure below, on an equal energy content basis, the price of oil traded at roughly twice the price of natural gas for roughly twenty-five years. Their prices were roughly linked because of the opportunities for substitution of one for the other. This dramatically changed in 2005 when our natural gas production began to increase, and petroleum now trades at over 6 times the price of natural gas at the beginning of 2012. 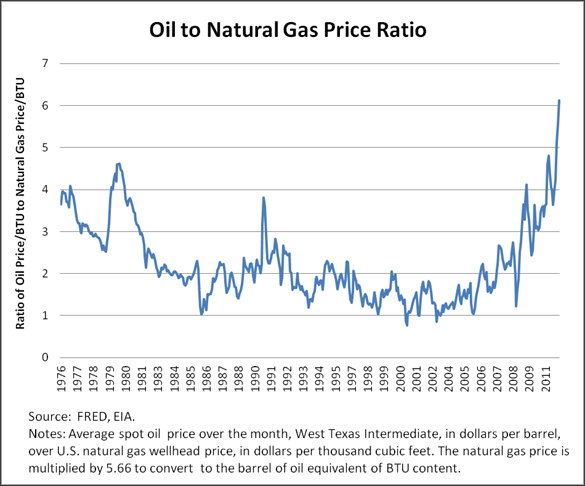 The practically unprecedented change in the ratio of oil to natural gas prices presents an incredible opportunity for the United States. It is creating economic opportunities around the country during what remain tough economic times, reducing the price of energy for many Americans, changing the mix of electricity sources on the grid in a way that reduces carbon emissions, and over the longer term offers an opportunity to strengthen our energy security. Reducing our dependence on petroleum-based energy sources in favor of natural gas could have many benefits—including the development of a more diverse set of options that does not constrain our foreign policy choices and provides great protection against oil price shocks in the future.[1] The first signs of a transition to increased reliance on natural gas in the transportation sector are beginning to emerge, but this transition will not proceed optimally or quickly unless we make proactive policy choices.

III. The Social Costs of Energy

One of the challenging features of our energy system is that many of our energy choices involve what economists call “externalities.” That is to say, the choices that individuals make about the production or consumption of a particular energy source impose costs on others in the form of shorter lives, higher health care expenses, a changing climate, and weakened national security. The current energy playing field is tilted because our individual energy choices are based solely on the visible costs that appear on electric bills and at the gas pump. This system masks the full or social costs arising from those energy choices.

The social cost of energy includes the price we pay at the gas pump—known as the “private costs”—plus the less obvious impact of energy use on health, the environment, and national security. Economists refer to these additional damages as negative externalities, or “external costs.”

The dramatic differences in the private and social costs of different energy sources—seen in the figure below, which adds on the external costs associated with each electricity source—illustrate how the low-private-cost energy sources on which we rely often come with high external costs. 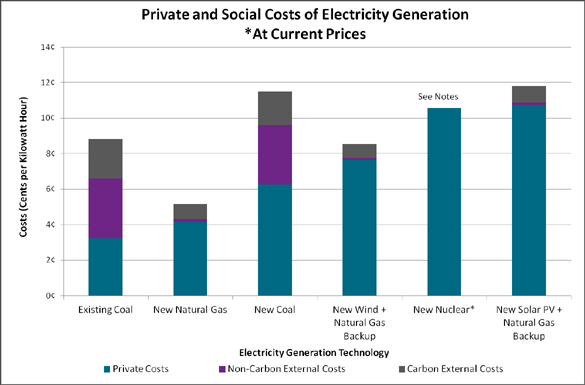 For example before accounting for external costs, a coal plant is a competitively priced way to produce electricity. But the costs of coal increase dramatically when the full costs of production are included. Specifically, the social cost per kilowatt hour of energy for existing coal plants is more than double the private cost—8.8 cents compared to 3.2 cents. In contrast, the private costs of a kwh of electricity from a new natural gas plant is 4.1 cents and the full or social costs is 5.2 cents. These calculations are from a recent Hamilton Project paper and are based on the National Academy of Science’s estimates of the non-carbon (primarily health) costs from producing a kwh of the various energy sources and the United States Government’s estimates of the damages from climate change due to the release of greenhouse gases.[2]

Once the social costs of all energy sources are accounted for, natural gas power plants stand out as the least expensive electricity source today. This outcome reflects the low prices of natural gas due to the recent dramatic increase in reserves and the fact that the health and environmental costs associated with natural gas are lower than for other fossil fuels.[3]

Despite the relatively low social costs of natural gas, industry and consumers have little incentive to change their energy choices based on comparing social costs. This is because coal and gasoline are comparatively inexpensive when only their private costs are considered—their costs to health, the climate, and national security are obscured or indirect, and so consumers behave as if they were less costly than they truly are.

Current energy policy tilts the balance in favor of energy sources that only appear cheap because their prices do not account for their full costs, although society nevertheless bears the external costs. A better approach to energy policy would involve a fairer competition between energy sources that placed them on a level playing field. The best approach is to price carbon and other pollutants appropriately. But in the absence of a national policy to price these external costs, there are still other policy options available. The Hamilton Project is exploring some of these policy options in research to be released this June.

Increasing our natural gas consumption—or altering our energy consumption in any manner—is easier said than done, since different forms of energy are not necessarily competing with one another on an even playing field.  For example, several barriers prevent us from fully utilizing natural gas in the transportation sector, as an upcoming Hamilton Project paper by Chris Knittel will discuss.

Some existing U.S. policies aim to correct externalities in energy use in the transportation sector, but they do not treat natural gas fairly.  For example, the Federal Renewable Fuel Standard as outlined in the Energy Independence and Security Act of 2007 ensures that transportation fuels sold in the U.S. contain certain volumes of renewable fuels, but does nothing to encourage the use of natural gas. Of course, natural gas is not a renewable fuel, but the stated rationale behind the Act is to promote energy independence and security, and to favor clean fuel sources. Use of natural gas would clearly advance the mission of the Act. Until natural gas is included in the Renewable Fuel Standard as a Conventional Biofuel, it will be at a disadvantage to fuels such as ethanol.

Electric vehicles provide another example of natural gas’s comparative disadvantage. Electric vehicles receive much larger subsidies through income tax credits than do vehicles that run on compressed natural gas. These two forms of vehicles produce comparable amounts of greenhouse gas emissions, and fairness would dictate that both should receive equal subsidies.

There are also issues in infrastructure which require further analysis. Decades of reliance on gasoline as our main fuel for transportation have led to the build-out of petroleum-focused infrastructure. For example, 120,000 gas stations exist in the United States for vehicle refueling, while there are fewer than 400 public refueling stations for natural gas. As a result, natural gas vehicles are prohibitively impractical for most consumers. We find ourselves in a situation in which the status quo is inherently favored, even if our energy needs in the short-run may be better served by natural gas and in the long-run by innovation. Without prejudging the outcome, it would be appropriate to study whether some targeted subsidies for the construction of natural gas refueling stations are justified.

I will conclude by bringing this back to the subject of today’s hearing. Periodically, the energy sector shows up in the headlines—most often this is due to price spikes, like those that some project would follow the potential closure of petroleum refineries in the Northeast or due to environmental damages associated with energy production or consumption. Our current energy policies encourage these problems, rather than discourage them, by failing to allow all energy sources to compete on a level playing field.

I respectfully make the following recommendations that aim to correct this core problem with our energy system:

I would like to thank the entire committee once again for inviting me to participate in this discussion. I will gladly respond to any questions.

[3] It is critical to underscore that there are important unresolved questions about the external costs of natural gas drilling, including its effect on water and air quality and the degree of fugitive greenhouse gas releases.  There are also unquantified external costs from nuclear and other energy sources.  The numbers in this testimony and the figure should naturally be updated as new information emerges.