The 2012 Public Opinion Survey in Egypt was conducted from May 4-10, 2012, in the weeks leading up to Egypt’s historic presidential election. The survey assesses which candidate is most favored by the public, what issues are driving public preferences, what Egyptians want their leader and their country to look like, and what role they want religion to play in politics.

It is important to keep in mind that it is not possible at this point to develop a good predictive model of electoral behavior in Egypt, as the experiment is new, coalitions are still forming, and little information is available about likely voters. Therefore, polls, including this one, can give a hint of the trends in public opinion about the Presidential candidates but cannot provide accurate predictions. One case in point is the fact that Mohamed Morsi, the candidate of the Muslim Brotherhood, the best organized group in Egypt today whose party won the largest block in the parliamentary elections, has been far behind in most Egyptian polls (including this one) although there has been evidence that he is gaining ground. In our poll he garnered only 8% support. But we know that political machinery is essential in getting out the vote and that the political environment in Egypt is changing almost by the day. It is possible, even probable that Morsi will get more votes than the polls are showing.

Still, there is evidence that voters differentiate between Parliamentary and Presidential elections and are not applying the same criteria in their selection. It is also noteworthy that the majority of respondents, 71%, said that the Muslim Brotherhood’s decision to field their own presidential candidates after they said that they would not was a mistake.

Muslim Brotherhood supporters are divided between Morsi and Abul-Fotouh, as are the ultra conservative Salafis. Salafi support for Abul-Fotouh appeared to hurt him among the many liberals who supported him. This fluid environment, in the absence of enough electoral history to develop a model for anticipating electoral behavior means that poll numbers on candidate popularity are mostly indicative of trends, but not necessarily of election outcomes. The most interesting information is on issues that are the driving forces in public assessments.

With this in mind, Abul-Fotouh led with 32%, followed by Amr Mousa with 28%, followed by Shafiq with 14%, and Morsi and Sabahi with 8% each. This poll ended on the day of Egypt’s first ever-Presidential debate on May 10th, 2012, and thus did not measure any impact the debate may have had.

Egyptians who voted in the parliamentary elections say that the most important factors in determining their choices were political party (24%) followed by candidate’s record and experience (21%), and candidate’s position on the economy (19%). But they rank these factors differently in their choices of Presidential candidates, with personal trust in the candidate being the most important (31%) followed by the economy (22%) and record and experience (19%). Interestingly only 9% ranked the role of religion in politics as the most important factor in the parliamentary elections and 8% in their Presidential preferences.

Those who say that the economy is their primary factor of selection tend to have a slight preference for Amr Mousa as President, while those who emphasize personal trust prefer Arab nationalist candidate, Hamdeen Sabahi and former Prime Minister, Ahmad Shafiq. Among the supporters of Abd Al-Men’em Abul-Fotouh, the biggest factor is the role of religion in politics. Among Amr Mousa’s supporters, the biggest stated factor is foreign policy.

Demographically, Mousa received the highest support among Christians (43%), followed by Sabahi (24%) and Abul-Fotouh (9%). Among university graduates Abul Fotouh led with 35% followed by Mousa with 23% and Sabbahi with 18%. Abul-Fotouh also led among the youth (under 25) with 36% to Mousa’s 23%. Mousa led among respondents who lived outside cities with 31% followed by Morsi with 21%, Shafiq with 17%, and Abul-Fotouh with 16%. Depending on the voter turnout, this category may turn out to be very important to the outcome of the elections. 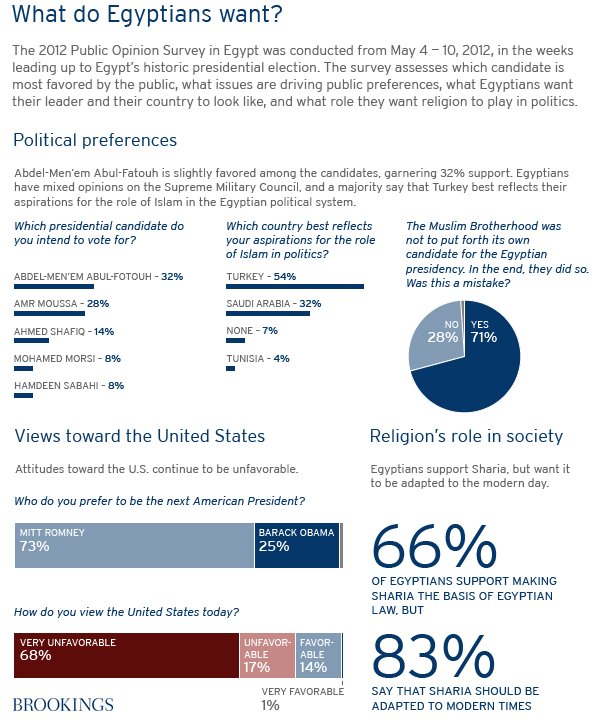 The Role of Religion

Although less than ten percent of respondents said that the role of religion in politics is the most important factor in their voting in both the parliamentary and presidential elections, two-thirds of respondents (66%) say they support making Shariia as the basis of Egyptian law. However, only 17% say that they prefer applying Shariia literally, including to the penal code, while 83% say they prefer applying the spirit of Shariia but with adaptation to modern times.

In envisioning the role Islam should play in the Egyptian political system, respondents were asked to choose which of six models (Saudi Arabia, Iran, Turkey, Tunisia, Malaysia, Morocco) is closest to their aspirations, a majority chose Turkey (54%), followed by Saudi Arabia (32%).

When asked in an open question to choose the leader they admire most in the world, but outside of Egypt, 63 percent of Egyptians identified the prime minister of Turkey, Recep Teyyib Erdogan, while five percent each identified President Obama and King Abdullah of Saudi Arabia. But asked which leader they want their next president to look most like in an open question that did not exclude Egyptians, 35 percent identified Anwar Sadat, 26 percent Gamal Abdel Nasser, and 15 percent identified Erdogan.

Attitudes toward the United States

Attitudes toward the United States continue to be unfavorable (85%).

Although Egyptians in the past year have been understandably preoccupied with their own political and economic situation and have not been paying as much attention to the American elections as usual, and they probably know less about the republican candidates for president, that has not prevented them from giving their opinions. Presented with a choice between President Obama and likely Republican candidate Mitt Romney, 73% said they preferred Romney, and only 25% chose Obama. It is unlikely that most Egyptians know much about Romney, and the choice is more likely to be an expression of disappointment with Obama. When Obama first came to office in 2009, even before his important speech in Cairo, Egyptian public opinion of the President was more favorable than unfavorable. This contrasted with Israeli public opinion, which was more suspicious of Obama. Since then, there has been a reversal of fortune, where in a poll we conducted in Israel last February, Israeli Jews expressed preference for Obama over all the leading Republican candidates (although his lead over Romney was within the margin of error).

Attitudes toward Iran and its Nuclear Program

When asked in an open question to identify the two countries that posed the biggest threat to them, 97% included Israel in that list of two, 80% included the United States, and 20% included Iran. While Iran remains far behind Israel and the United States as a perceived threat, which is consistent with our polls over the past several years, those who identified Iran as one of the two biggest threats have increased from 8% in 2009 and 15% in October 2011 to 20% in the current poll.

Attitudes toward the Crisis in Syria

[Khan's support from the masses across the country gives him an edge.] What Khan has at the moment that some of his predecessors did not have when they faced a crackdown is the ability to turn out street power. The increasing crackdown and now censoring of Khan's speeches is likely to backfire for the government — and plays directly into Khan's narrative of victimhood by the state. [Furthermore,] Khan's party has said his potential arrest will be a 'red line.' If it happens, the immediate consequences are likely to be a potentially dangerous confrontation between Khan's supporters and the state. I think the party will rally behind Khan, not find a different leader.