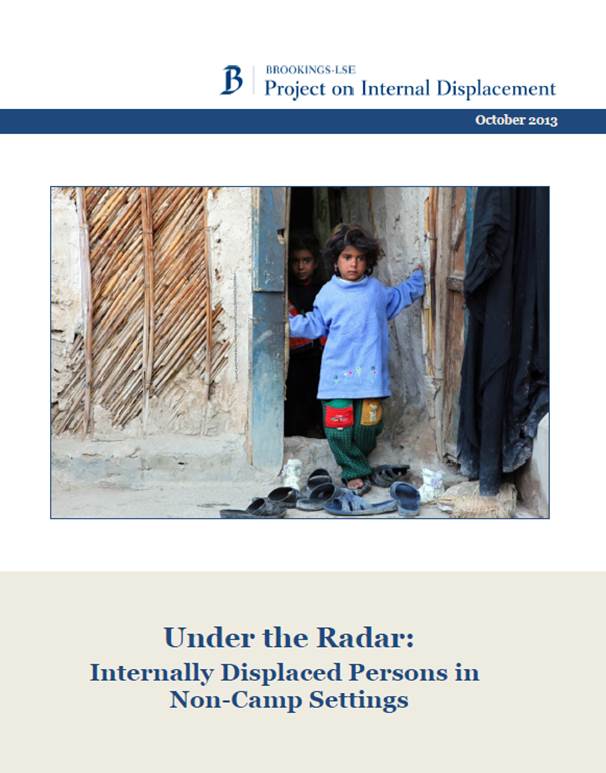 Rather than living in large camps, most of the world’s 28.8 million internally displaced persons (IDPs) currently live “outside camps.”[1] This rather inelegant term – “IDPs outside camps” – refers to IDPs who live in a variety of settings or situations, making generalizations difficult. They may be in urban, rural or remote areas; they may own or rent housing; they may be sharing a room or living with a host family; they may be occupying a building or land that they do not own, or living in makeshift shelters and slums or living on the streets. Many IDPs have fled to small towns and villages near their homes but increasingly IDPs are ending up in urban areas, where those who have been forced to leave their homes because of conflict, human rights abuses and disasters live side-by-side with the non-displaced poor and economic migrants.[2] While urban areas may offer opportunities for rebuilding lives, they usually present particular difficulties for IDPs seeking to find their place in a new and complex environment. Adequate housing and shelter are often in short supply, and access to public services such as education, health, water and sanitation may be more difficult for IDPs to access.

Because of the circumstances that led to their displacement and the conditions they encounter after being displaced, IDPs often face particular assistance and protection concerns in comparison with those living in the same communities who have not been displaced. Yet, because they are dispersed and often not easy to identify, non-camp IDPs tend to remain under the radar screen of government authorities and international actors concerned with IDPs. Local organizations may be more aware of IDPs’ needs and concerns, but often lack the capacity to assist all of those in need. Where assistance is provided to IDPs outside camps, it is generally ad hoc and insufficient.

Chaloka Beyani, UN Special Rapporteur on the Human Rights of Internally Displaced Persons and co-director of the Brookings-LSE Project on Internal Displacement, has identified the issue of IDPs outside camps as one of the priority concerns of his mandate and in 2011 presented a report on the issue to the UN Human Rights Council[3] which in turn built on previous work by the mandate on IDPs living outside of camps.[4] While based on Dr. Beyani’s report to the Human Rights Council, this publication is intended for a broader audience of government, humanitarian and development actors as well as the general public and expands on the issues raised in the 2011 report. Like the report to the Human Rights Council, this publication focuses on three specific issues: IDPs who live in urban contexts; IDPs and host communities; and the role of local authorities in responding to IDPs outside camps.

[4] Previous work included reports to the Human Rights Council identifying this as a key challenge in the field of internal displacement and a priority area for the mandate, A/HRC/16/43; A/HRC/13/21; steps bringing it to the attention of the wider humanitarian community via the IASC; see IASC, 7th Working Group Meeting, “Internally displaced persons outside camps: achieving a more equitable humanitarian response,” 12 March 1993 and specific attention to the issue in the context of country visits by the mandate.