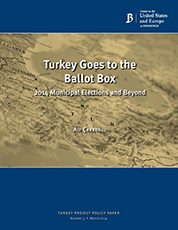 With municipal elections taking place on March 30, Turkey is entering into an eight-month long election cycle at a time when the country is undergoing considerable domestic turmoil.

The AKP (Adalet ve Kalkınma Partisi, or Justice and Development Party) came to power in November 2002 with about 34 percent of the popular vote. Since then, the AKP has increased its electoral support to 47 percent in 2007 and then to 50 percent in 2011. However, by the first week of January 2014, nearly 11 years after it came to power, many have begun to argue (likely prematurely) that the AKP may soon see its supremacy come to an end.

That possibility has been brought about by the emergence of a corruption scandal in the AKP’s government. Ali Çarkoğlu examines the intricacies of that scandal and what impact it may have on the results of Turkey’s upcoming local elections.