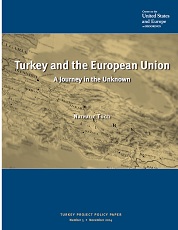 Turkey’s relations with the European integration project have been dense, contested and tortuous since the outset. Despite their intensity and duration over the decades, the end point of the relationship remains unknown. In light of this, Nathalie Tocci briefly recounts the evolution of the EU-Turkey relationship and outlines three possible scenarios for the future: competition, cooperation and convergence. It concludes by discussing the implications of these scenarios for the United States.

• Turkey and Europe have had a long standing relationship in history characterized by cooperation as much as conflict.

• Turkey’s accession to the European Union has been characterized by the long duration it is taking and the uncertain nature of its outcome.

• The uncertainty in Turkey’s relations with the EU is partly exacerbated by challenges facing the EU’s own future.

• Cyprus’ problem remains a major obstacle in the way of the relatively positive cooperation or convergence scenarios emerging.

• Turkey’s EU vocation continues to carry strategic importance for the United States at a time when Turkey’s neighborhood drifts into instability and chaos.