Climate policymakers face major challenges when designing
future global carbon markets—those involving
carbon transactions between “buyers” (predominantly
developed countries to date) and “sellers” (mainly developing
countries, particularly least developed nations).
On one hand, domestic carbon markets are currently
spreading and linking rapidly around the world. By 2015,
based on already announced policies, carbon markets
will cover almost 3 billion people and the lion’s share
of the world’s economy. Because carbon markets, and
carbon pricing instruments in general, present the most
flexible mechanism to create low-carbon economies,
carbon markets are likely to play a major role in future
efforts to confront climate change—perhaps on the order
of shouldering 50 percent of the solution. 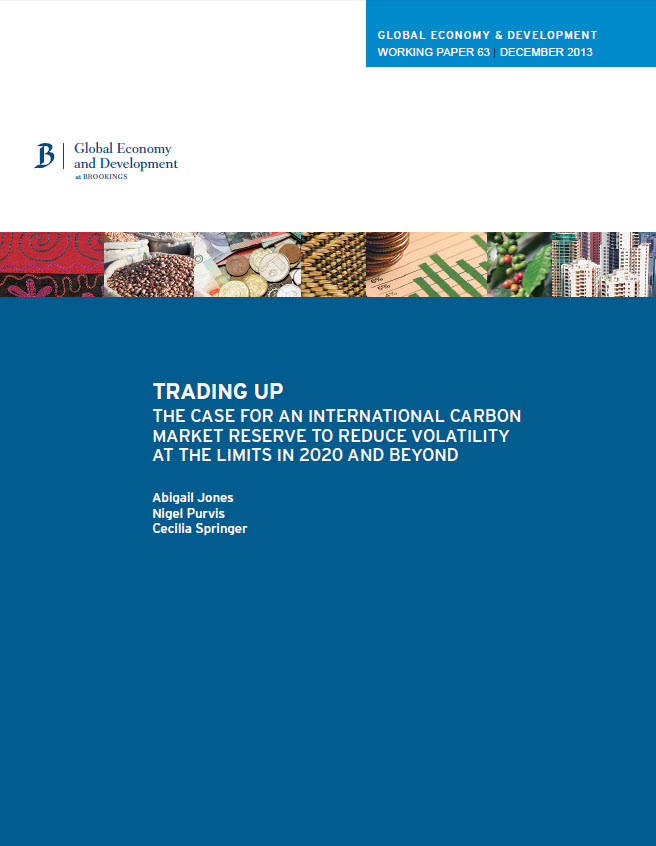 Yet today’s global carbon market, on the other hand, is
somewhat dysfunctional and highly volatile—characterized
by dramatic changes in supply, demand, price,
and public confidence. Prices today under the Clean
Development Mechanism (CDM), the world’s largest
global carbon market, are just 7 percent of market value
in 2011, leaving policymakers, companies, and investors
wondering what should be done to make the future global
carbon market more viable.

Absent new policy solutions, global carbon markets of
the future—including the new global mechanisms na- tions are constructing in ongoing international
climate talks for 2020 and beyond—are likely to face similar uncertainty, volatility and crises in
confidence. Most economic models project that global carbon market prices are likely to remain
depressed through 2020 with supply greatly exceeding demand. In the longer run, high prices, low
prices and price spikes all seem plausible. Demand for carbon market securities, or Certified
Emissions Reductions (CERs), depends mainly on three things—rates of economic growth, the speed of
innovation, and the stringency and scope of climate policy—each of which change constantly,
sometimes quite unpredictably, and rapidly. For its part, Point Carbon estimates that by 2030
carbon prices in the European Union will hover around €70 per ton, suggesting that prices in the
international carbon
market might be roughly €45 per ton.

Reducing extreme volatility in global carbon markets
would have numerous benefits, including providing a
steady stream of foreign direct investment for low-carbon
development in least developed countries (LDCs), minimizing
the costly disruptions of price spikes and crashes
and empowering the world to pursue ambitious climate goals. Beginning immediately, nations need to design post-2020 global carbon markets with policy features that reduce extreme volatility and that reflect, at least to some degree, the real value to the world of reducing emissions.

In this paper we make the case for one useful, albeit partial, solution: a new international carbon market reserve with the authority and mandate to adjust the supply of global carbon market securities when prices rise or fall to extremes. An international carbon market reserve could help nations temper likely swings in global carbon markets by increasing the supply of carbon credits when demand exceeds supply, and potentially reduce supply by purchasing credits when prices fall. Furthermore, were the reserve to forgo a price floor function, it would generate new financing—perhaps billions of dollars—to build resilience to the adverse effects of climate change in developing countries.

Since the world has not seriously considered whether to create a global carbon market reserve, it would be premature to conclude that the concept is either politically feasible or infeasible. To be sure, some would oppose what they might unfairly demonize as a new global central bank. Yet others are likely to see how a global reserve could complement national and regional mechanisms to maintain domestic price stability, while limiting excessive volatility across the rapidly evolving global carbon market. Since both developed and developing nations would benefit from the reserve—the former from predictable and reasonably priced carbon securities in developing nations, the latter from strong and stable demand for carbon credits from developed nations—creating consensus about the desirability of a reserve may prove manageable in the years ahead.

On April 22, Samantha Gross discusses approaches for decarbonizing heavy transport and industry sectors of the economy at the 2021 Freedman Lecture hosted by the University of Massachusetts Amherst.

Pot, water theft, and environmental harms in the US and Mexico

Climate adaptation and the great reset for Africa