Among the many spending cuts and tax increases legislated to take effect at the turn of the year, few policies have as direct an effect on those most affected by the Great Recession than the expiration of extended unemployment insurance (UI) benefits. In the first week of January, roughly two million individuals will lose extended benefits with the expiration of legislation that temporarily increased the duration individuals can claim UI. Although these benefits make up only $30 billion of the roughly $500 billion ‘fiscal cliff,’ they have a disproportionate effect on the lives of the unemployed and their families, as well as on the aggregate economy.

Whether to extend unemployment benefits—a decision currently tied up in the greater debate around the federal budget—should be motivated by consideration of the benefits and costs of the program. Advocates of an extension of UI benefits point to the fact that these benefits accrue to unemployed workers and their families and help put food on the table and pay the rent at a time of extraordinary economic weakness; in doing so, these benefits also boost the economy as a whole as UI recipients maintain consumption. Skeptics of an extension point to potential costs arising because beneficiaries may spend less time and effort searching for work, and the impact of funding the extension on the deficit.

Building on previous Hamilton Project work, we show that the evidence continues to suggest that extended benefits provide a sizable boost for workers and the economy, but have little negative effect on work incentives and unemployment.

The Value of UI for Individuals and the Economy

First and foremost, UI benefits help individuals and families by assisting them through times of unemployment without a dramatic change in lifestyle. Research by Jonathan Gruber of MIT shows that individual consumption for those receiving UI benefits falls only one-third as much as it would have in the absence of the program (Gruber 1997). In other words, this means workers losing jobs can still put food on the table for their children and not have to cut back drastically to manage the unemployment spell. To be sure, these families still feel the pain of unemployment, but it is less intense and life-changing than it would otherwise be.

The gains go beyond the families of those directly affected to the greater economy. According to the Congressional Budget Office, each dollar of UI benefits raises aggregate economic activity by $1.10, and each million dollars of UI benefits increases employment by six jobs. Among the components of the ‘fiscal cliff,’ this places UI benefits at the top of the list of policies that have the largest impact on the economy per dollar spent. The reason that there is such a large effect is that families on UI rely on it to maintain necessary spending, thus the money is rapidly spent rather than saved. Absent such benefits, spending would fall sharply, resulting in hardship on not just their families but also on the shops and workers that depend on those consumers for their livelihoods.

Concerns About the Impact of UI on the U.S. Economy

While the benefits to millions of American families are many, the costs of extending UI are likely to be relatively small in the current economy. These potential costs would typically arise because UI skews labor-market decisions, blunting the incentive for those out of work to search for a new job. However, the magnitude of this effect is modest even in normal economic times. For instance, research has shown that few workers actually wait until benefits run out to find a job (Card and Levine 2000; Card, Chetty and Weber 2007), and that the job searching process is ongoing. Data collected on workers who became unemployed during the Great Recession suggest, moreover, that any impacts of benefits on the length of unemployment are, if any, extremely small. Rothstein (2011) finds that extended benefits may have increased the unemployment rate by only about 0.2 percentage points and the long-term share of unemployment by 1.6 percentage points.

The Unique Importance of UI for Today’s Unemployed Workers

Today’s labor market provides the strongest case for extending UI benefits. It has always been harder to find work the longer you are unemployed, but the situation facing today’s workers is exceptional. No matter how long a worker has been unemployed, the odds that they find a job are far lower than before the Great Recession. Furthermore, the odds of experiencing long-term unemployment are highly related to losing a job in a particularly hard-hit industry, like construction or manufacturing, and are disproportionately concentrated in certain distressed states.

The chart below shows the likelihood of finding a job as measured in the monthly Current Population Survey data. The chart shows the probability of leaving unemployment for employment in each month. These rates are simply at exceptionally low levels. The odds that an unemployed worker found a job each month fell from 28 percent in 2007 to an average of 16 percent during the last three months of 2009. This year, the job finding rate is still 30 percent lower than the average from 1990-2007. 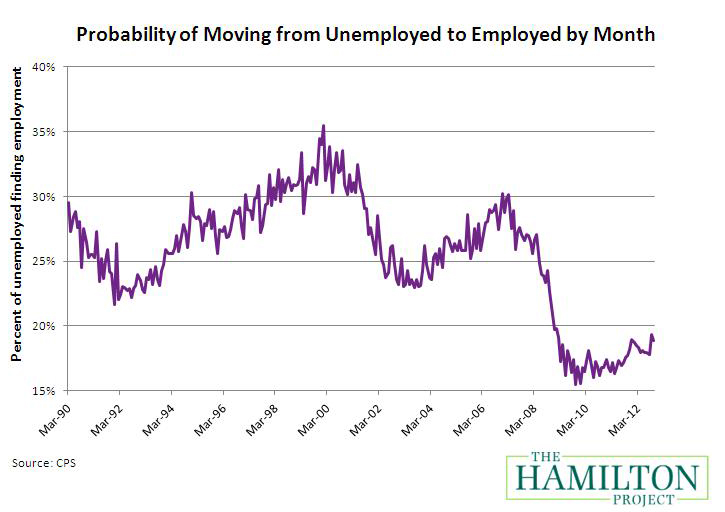 Why is the job-finding rate so low? The basic reason is that job openings remain depressed and there are a lot of unemployed workers competing for those jobs. The job opening rate fell more than 40 percent between 2007 and 2009 and is still almost 20 percent lower than that level now. As a result, the number of unemployed workers per job vacancy surged, as the next chart illustrates. 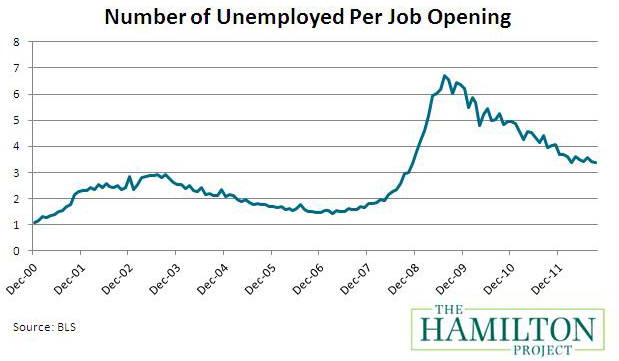 In 2007, there were 1.6 unemployed workers for each job vacancy; that ratio increased to nearly 6.7 unemployed persons per job opening at the peak of the crisis. Today, there are still more than 3 unemployed workers per job, roughly twice the pre-recession level.

The potential benefits from extending UI benefits are significant. Not only do they help families through what can be an extremely difficult period, but they also provide some of the greatest “bang-for-the-buck” in terms of their impact on the economy. Moreover, the evidence suggests that extended benefits are having at most a small effect on the duration of unemployment. Rather, today’s tough economic situation is the central cause of these lengthy durations of unemployment.

As Congress and the Obama administration negotiate a path past the fiscal cliff, they should keep in mind the evidence that, with the economy still struggling, extended UI benefits help families and the economy in a number of ways that likely outweigh the costs.