During much of the past three years, the Syrian civil war has been the most prominent item on the Middle Eastern political agenda and has dominated the political-diplomatic discourse in the region and among policy makers, analysts and pundits interested in its affairs.

Preoccupation with the Syrian crisis has derived from the sense, apparent since its early phases, that it was much more than a domestic issue. It has, indeed, become a conflict by-proxy between Iran and its regional rivals and the arena of American-Russian competition. It has also had a spillover effect on several neighboring countries and has been a bellwether for the state of the Arab Spring. 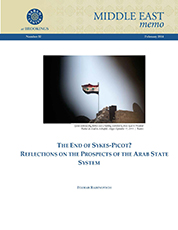 As the conflict festered it also prompted a broader discussion and debate over the future of the Arab State system. The collapse of Syria, the ongoing fighting in Iraq, and the general instability in the Middle East has led some observers to question whether the very geography of the region will be changed. Robin Wright, a journalist and scholar at the Woodrow Wilson International Center for Scholars, argues that “the map of the modern Middle East, a political and economic pivot in the international order, is in tatters.” Wright also warns that competing groups and ideologies are pulling the region apart: “A different map would be a strategic game changer for just about everybody, potentially reconfiguring alliances, security challenges, trade and energy flows for much of the world, too.”  Similarly, Parag Khanna, a senior fellow at the New America Foundation, argues, “Nowhere is a rethinking of “the state” more necessary than in the Middle East.” He contends that “The Arab world will not be resurrected to its old glory until its map is redrawn to resemble a collection of autonomous national oases linked by Silk Roads of commerce.” Lt. Colonel Joel Rayburn, writing from the Hoover Institution, points out that the alternative may not be new states but rather simply collapse. “If watching the fall or near-fall of half a dozen regimes in the Arab Spring has taught us anything, it should be that the Arab states that appeared serenely stable to outsiders for the past half century were more brittle than we have understood,” warning darkly, “This conflict could very well touch us all, perhaps becoming an engine of jihad that spews forth attackers bent on bombing western embassies and cities or disrupting Persian Gulf oil markets long before the fire burns out.”

This discussion touches on a key question: Will the collapse of one or several other Arab states produce a new order in the region?

The regional order has been threatened before, but today’s challenge is unique. Syria is what has prompted the latest reevaluation of the Skyes-Picot borders, but many of the problems predated the Syrian civil war. Ambitious monarchs in the 1930s and 1940s challenged the order after the colonial period. The doctrine of Pan-Arab Nationalism and Gamal Abd al-Nasir’s messianic leadership in the 1950s and by Saddam Hussein in 1990 again posed a threat. Now it is now challenged not by a powerful state or a sweeping ideology but by the weakness of several Arab states that seem to be on the verge of implosion or disintegration.

This paper assesses the situation in Syria, with an emphasis on what might lead to its de facto partition or lasting collapse. It then examines Syria’s neighbors and their prospects for stability. The paper concludes by exploring how the United States, Israel and Iran might affect this tenuous balance.

Syrian refugees in Jordan: A decade and counting