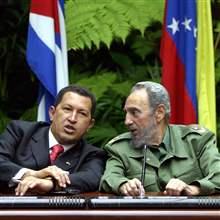 Over the past 15 years, Venezuela and Cuba have become close allies both economically and politically. In this policy brief, Ted Piccone and Harold Trinkunas detail the two countries’ growing interdependence, explore possible scenarios for Cuban-Venezuelan relations going forward, and suggest policy recommendations for the United States.

• The ongoing economic and political crisis in Venezuela reinforce the negative aspects of their interdependence.

• The economic cost of Venezuela’s support to Cuba becomes an increasingly important constraint on the Maduro administration. Instability in Venezuela reminds the Cuban government of the risks associated with their interdependence on the current regime in Caracas.

• A reduced Cuban presence in Venezuela would give Venezuelans more control of their own democratic destiny.

• A gradual reduction in Venezuelan assistance to Cuba would bolster the case for further restructuring of Cuba’s economy and diversification of its international partners.

• Rather than consider direct intervention in the relationship, the United States should seek to lead North American energy integration efforts to reduce Venezuela’s hold on its most profitable market (the United States). This will place increasing economic pressure on the Venezuelan government to reconsider its spending on overseas assistance to Cuba.

• The United States should also lead multilateral efforts to help Petrocaribe countries assure themselves of energy security at reasonable costs in the short term, and support a transition to sustainable alternative energy sources in the long term.

• The Obama Administration should adopt a new round of executive measures to ease the longstanding embargo on U.S. investment and trade with Cuba. This will support further diversification of the Cuban economy and the emergence of middle classes.

Ultimately, though, it is up to Cuba and Venezuela to address the consequences of this unsustainable  subsidized relationship.