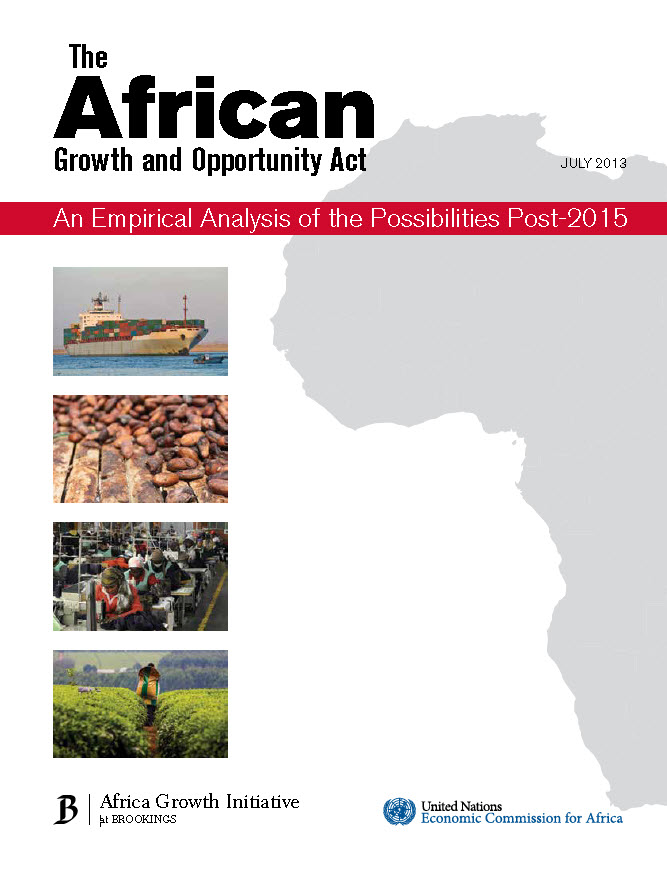 The African Growth and Opportunity Act
(AGOA), one of the defining characteristics of
the trade and commercial relationship between
the United States and Africa, will expire on September
30, 2015. So far, there have been heightened
discussions both by African and U.S. policymakers
on the post-2015 commercial relationship between
the United States and African countries, excluding
North Africa. These discussions have largely focused
on whether to extend the current legislation, and, if
so, for how long, and what elements of the current
legislation should be changed. Although there have
been propositions as to what may happen under
different scenarios, these are not supported by hard
empirical evidence and thus are not very useful in
informing the design of the post-2015 relationship.
As AGOA’s extension is debated, it is important to
have empirically based analyses of how changes to
the legislation could affect trade patterns as well
as how changes in the global trading environment
could affect U.S.-Africa trade volumes and African
economies more broadly.

This report provides an analysis of outcomes of
U.S.-Africa trade under five categories of post-2015
scenarios. These scenarios look at the trade and
income implications of i) not extending AGOA
beyond 2015; ii) expanded product eligibility for
AGOA; iii) revisions to the currently eligible countries;
iv) a restructuring of AGOA to resemble the
economic partnership agreements (EPAs) of the
European Union; and v) the effects that a possible
EU-U.S. free trade agreement (FTA) could have on
AGOA or an EPA-like situation, with an additional
scenario examining how a continental free trade area
(CFTA) would play into such an integrated trade
environment.

These findings suggest certain recommendations for policymakers, including extending AGOA beyond 2015: Without an extension, there will be declines in African exports, economic diversification and employment for many AGOA-eligible countries.

The results indicate, first of all, that should AGOA
not be extended and current AGOA-eligible countries
revert back to the U.S. Generalized System of
Preferences (GSP), then trade losses would be distributed
in a very unequal fashion across the continent
due to the variation in AGOA-eligible products
that are exported by different countries. The
results also show that expanding product eligibility
for AGOA would only have small effects on the
exports coming from AGOA-eligible countries—
unless complete duty-free and quota-free (DFQF)
market access was granted because the most import-
sensitive sectors for the U.S. (e.g., sugar, cotton
and clothing) are still where Africa would gain
the most. The results of the analysis also show that
U.S. producers and exporters would not be affected
by providing these additional benefits. In addition,
the analysis shows that excluding middle-income
countries that are currently eligible for AGOA or
adding other non-African least-developed countries
(LDCs) that are currently not AGOA-eligible
would result in considerable trade losses and
increased competition for Africa. Last, the results
show that EPA-like agreements could result in large
losses in tariff revenue for African countries, but also
demonstrate the importance of regional integration
because there is a higher increase in intra-African
trade when EPAs are in place with a CFTA instead
of the currently proposed regional FTAs.

These findings suggest certain recommendations for
policymakers, including extending AGOA beyond 2015: Without an extension, there will be declines
in African exports, economic diversification and
employment for many AGOA-eligible countries.
Thus, there remains a strong case for continuing or
expanding the current preferences. The results also
show the importance for regional integration of
allowing African exporters to remain competitive,
and making efforts toward offsetting the potential
tariff revenue losses that could be experienced with
EPAs (or agreements like them) or external FTAs
that would compete with African exports. Increased
trade assistance and investment will likely be necessary for countries to ensure sufficient progress
in this area. There is also an obvious need for policymakers
to examine the idea of granting complete
DFQF access to the U.S. market for Africa because
of the large benefits it would provide for AGOA-eligible
countries and the low cost to the U.S. They
should also be careful in considering an extension
of AGOA benefits to LDCs outside Africa due to
the negative effects it could have for African economies.
Last, there is an obvious need for AGOA-eligible
countries to further exploit the benefits of the
trade preferences available under the legislation.