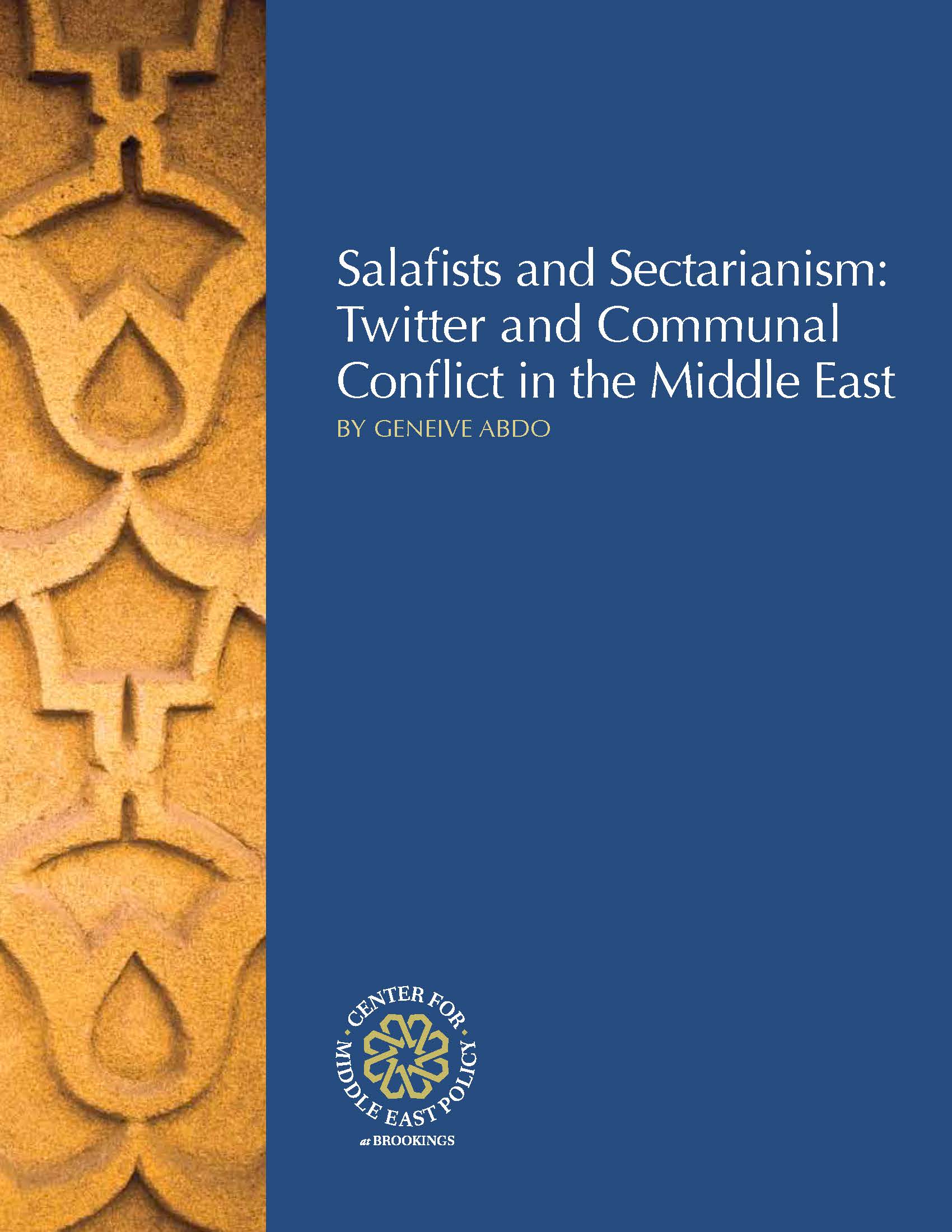 The widening divide between Shi‘a and Sunni believers has become one of the most important factors in destabilizing the Middle East, and there seems to be no end in sight. The blossoming of the Syrian war into a full-scale sectarian conflict between Shi‘a and Sunni Muslims and its spillover into parts of Iraq and Lebanon has re-ignited a debate among U.S. policymakers and Western analysts over whether fundamental doctrinal differences or political rivalry and socio-economic grievances lie behind the conflict.

Although actors on both sides are driving this conflict, it is today’s Salafists who are proving to be the dominant standard-bearers of anti-Shi‘a discourse—not taking into account the violent jihadists, whose popular appeal and staying power have yet to be demonstrated despite some spectacular and headline-grabbing territorial gains and terrorist acts. The Salafist movement has shown itself adroit at exploiting opportunities to advance its rhetorical and theological positions amid the religious re-examination and outright contestation among religious subgroups sparked by the recent Arab uprisings and their successful challenge to existing institutions of power in the region.

At the heart of the resurgent Salafist movement is the seemingly sudden emergence of a compelling message of a return to the ideas and morals of the era of the Prophet Mohammad at the expense of Islam’s subsequent rich tradition of religious interpretation. Given that the uprisings occurred on the heels of a surge in Shi‘a power in both Iraq and Lebanon, the Sunnis were predisposed to feel threatened. The sectarian war in Syria has been pivotal in providing a narrative for both sides in answering the fundamental questions within the world of Islam: Who is a Muslim, and who gets to decide? Although these are age-old questions within Islam, the violence that has ensued since the Arab uprisings over these very issues threatens to redraw the map of the Middle East and create instability for years to come.

The conflict over resolving these two questions is both a Shi‘a-Sunni debate as well as an internal conflict among the different strands of Sunni thought. While some scholars and specialists argue that the root of the conflict is the result of weakening or collapsed states in the aftermath of the Arab rebellions, this study will open a much-needed window on one of the fundamental causes—if not the fundamental cause—of today’s violence: Islam itself is being revised in the midst of political upheaval in the Middle East. Jihadists, Salafists, Shi’a militias, and other non-state actors are actively trying to redefine Islam as they see it.

The following study focuses on rising Salafist players who are intimately engaged in the public debate—not the radical jihadists who are fighting in Syria and Iraq but the non-violent Salafists who are successfully using social media and other such platforms to express their negative views of the Shi‘a and, by association, the Alawites and Iran. They are using social media to take advantage of conflicts throughout the region in order to raise their public profiles and influence public opinion. Although much media focus and attention is devoted to the radical jihadists, those Salafists who do not condone violence also have an important role in the future of destabilizing the Middle East. Uncovering and understanding their subculture, and in particular their public discourse, is vital to prudent and responsible policy formulation.

Penetrating and engaging with the world of contemporary Salafism presents a number of challenges to the researcher. However, as this study will show, new social media technologies taking hold around the world, in particular Twitter feeds, can offer valuable insight into Salafist ideas and practice and help identify leading personalities, uncover important relationships, and reveal significant discursive trends. “Social media has revolutionized the way that the world has understood the Syrian conflict and how that conflict has been waged,” asserted a study published by the United States Institute of Peace. “Syria has been at the cutting edge of the evolution of new uses of social media and the Internet by political actors, insurgent groups, journalists and researchers.” As skeptics of the power of social media have noted, Twitter cannot inspire revolutions and did not create the Arab uprisings, for example. The political and social conditions for revolution or violence must be present and do not emerge from cyberspace. These same critics argue that individuals are responsible for creating the Arab uprisings, not the tools available to them.

Nonetheless, Twitter and other forms of social media have proven to be valuable tools in influencing events on the ground once they are already underway, creating an interactive discussion between those in cyberspace and the foot soldiers on the ground.

In her new paper “Salafists and Sectarianism: Twitter and Communal Conflict in the Middle East,” Geneive Abdo shows that chief among the central threads of Salafist discourse in Arabic is an abiding belief that the Shi‘a are not real Muslims, and are out to extinguish Sunni believers who, in the Salafist view, are the only true Muslims. This paper will also suggest ways in which events on the ground, whether major battles in the Syrian war or the mere arrest of a Sunni leader, provide fodder for religious intolerance in the Twitter sphere, which then can exacerbate religious strife on the ground. Any doubts about the power of social media, including Twitter and YouTube, to engage and mobilize forces for religious struggle should have been dispelled by the recent recruitment and propaganda successes of the militant Sunnis of the Islamic State.

While direct causation cannot be established between the Salafists’ sectarian discourse, as spread and amplified by social media such as Twitter, and specific events on the ground, Abdo argues that neither can it be summarily ruled out. To ignore or downplay the role of religion, religious identity, and religious grievance in shaping and even driving today’s conflicts is to fall into the same trap that has long plagued Western analysis of the Muslim world: a reluctance or downright refusal to acknowledge the very real part of religious identity in fomenting and perpetuating political and social activism and inter-communal violence in the Middle East.

This is, perhaps, not that surprising, as the causes are both contextual and discursive. In the first place, this phenomenon can be partly ascribed to very real differences between the Muslim and Western worlds on the place of religion in public and private life. Where Islam offers its adherents a complete prescription for human existence and behavior, Western religious practice has become increasingly isolated and cordoned off from the public square. Religion, then, must be seen within the context of Muslims’ beliefs and practices; the two cannot be simply divorced from one another to fit an alien, Western model. According to a survey conducted by the Pew Research Center in November 2013, in Iran and Iraq at least three-quarters of Shi’a and Sunnis said religion is very important to them. Only in Lebanon was there a difference between the sects: 66 percent of Lebanese Sunnis said religion was important, compared with 51 percent of Lebanese Shi’a.

The careful reader will note that Abdo is not suggesting that other causes—social, religious, economic, and so on—are not also important factors in today’s sectarian rivalries and conflicts and thus unworthy of discussion and analysis. Abdo is, however, making a case for the respectful study and analysis of religious difference and the role that it plays in the modern Middle East. Toward that end, Abdo will explore ways in which the social media platform of Twitter, with its enormous reach, low costs, and ease of access, has allowed religious debate in the Middle East to go transnational among millions of users.

While the mosque was once the central forum for local political thought and debate and had a great effect in Islamizing Arab societies into the 1990s, its reach was always relatively narrow, easy to monitor, and limited in appeal. The only other medium that can possibly compete with social media is television. Some of the Salafists this author will feature later in this monograph have millions of Twitter followers, scattered across many Arab countries. A few years ago, before the Arab uprisings, some were completely unknown. Now, they rank among the region’s most influential non-state actors.

The Salafists are just one example of the emergence of influential non-state actors in the aftermath of the Arab uprisings. They pose a formidable challenge to the United States government as it tries to deescalate conflicts in the region. Whether it is Hamas, Hezbollah, the Muslim Brotherhood, or ill-defined movements such as the Salafists, the United States has few channels for dialogue and, even if some channels exist, the rising anti-Americanism among these actors makes potential dialogue and negotiation highly improbable.

In the case of some Salafists featured in this study, the government of Saudi Arabia provides them with a home and with relative security. The United States should pressure its allies to coordinate efforts to decrease religious intolerance, a stated American value. In addition, Washington should avoid appearing to take sides in the Sunni-Shi‘a conflict. Already, due to Washington’s willingness to negotiate with Iran over its nuclear program, many Sunni leaders perceive the United States to be siding with the Shi’a. As a result, actions of these Sunni figures are geared toward reducing Shi’a Iran’s influence in the Arab world.

The first section of this study will explain Salafist belief and how it has changed since the Arab uprisings began. The second section will feature key Salafist leaders—identified through their success propagating their views on Twitter—and the third section will present important Twitter feeds from 2013 and offer an analysis of what they reveal about views towards the Shi’a and whether such tweets have had any effect on events being played out in Syria, Iraq, and across the Middle East.