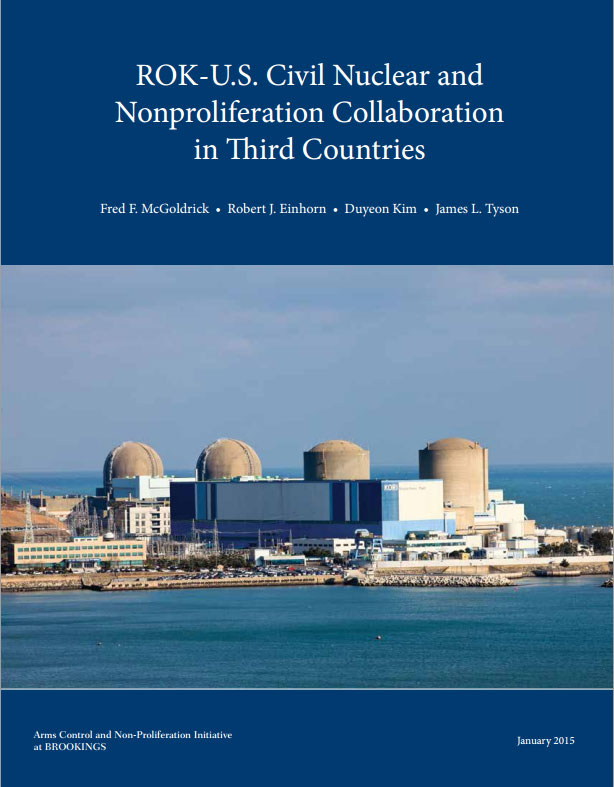 The United States and the Republic of Korea (ROK) have enjoyed a lengthy and fruitful bilateral cooperative relationship in the peaceful uses of nuclear energy and in promoting mutual nuclear nonproliferation objectives. This Brookings Institution report assesses the prospects for further ROK-U.S. collaboration on civil nuclear projects and nuclear nonproliferation, safety and security—in particular, those efforts which would involve third countries.

The United States has long been a major exporter of nuclear materials, equipment and technology. South Korea has recently entered the international nuclear market—for example, it has sold nuclear reactors to the United Arab Emirates (UAE)—and is positioning itself to become a leading supplier of nuclear reactors, components, and services to other countries. The nuclear industries of both countries are already closely intertwined.

The projected growth in the use of nuclear power worldwide creates new opportunities for deepening and expanding existing U.S.-ROK collaboration to promote the civil uses of nuclear energy in third countries. This expansion can build on the cooperation that is already taking place. For example, American companies are participating in the South Korean-led nuclear project in the UAE, and South Korean firms are significant suppliers to Westinghouse AP1000 reactors that are under construction in China. The governments and nuclear industries of both the United States and the ROK also have a strong mutual interest in ensuring that their cooperation in transferring nuclear materials, equipment and technology to third countries is subject to the strictest safety, security and nonproliferation standards. The conclusion of a new ROK-U.S. civil nuclear cooperation agreement, which is expected soon, should help enhance nuclear commerce and intergovernmental collaboration between the two countries, and promote the development of partnerships between their industries in third markets.

This report attempts to answer a number of questions, including the following: