Editor’s Note: This report was written by members of the Committee on International Economic Policy and Reform, a non-partisan, independent group of experts, comprised of academics and former government and central bank officials. 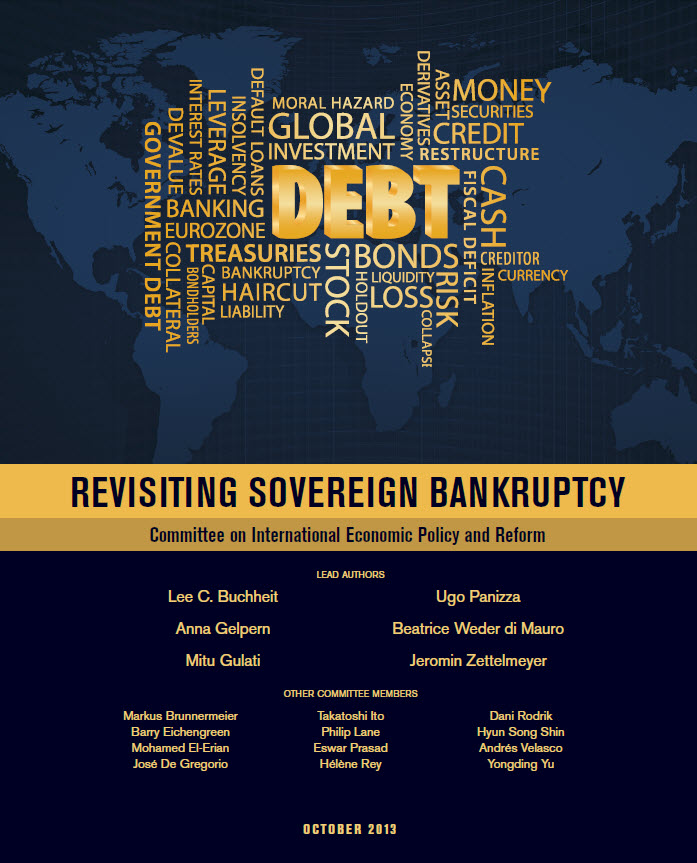 Sovereign debt crises occur regularly and often
violently. The recent debt crisis in Greece almost
led to the collapse of the Euro. Yet there
is no legally and politically recognized procedure
for restructuring the debt of bankrupt sovereigns.
Procedures of this type have been periodically debated—
most recently, about a decade ago, when
IMF management proposed a global sovereign
debt restructuring mechanism (SDRM). They have
so far been rejected. Countries have been reluctant
to give up power to supranational rules or institutions.
Creditors and debtors have felt that there
were sufficient instruments for addressing debt
crises at hoc. Importantly, there were also fears
that making debt easier to restructure would raise
the costs and reduce the amounts of sovereign
borrowing in many countries. This was perceived
to be against the interests of both the providers of
both creditors and major borrowers.

This year’s CIEPR report argues that both the
nature and our understanding of sovereign debt
problems have changed in ways that create a much
stronger case for an orderly sovereign bankruptcy
regime today than ten years ago.

To address these problems, the report presents
policy proposals at two levels: for the Euro area,
and globally.

The current financial architecture in the Euro area is inadequate in this respect, because its main pillar—the European Stability Mechanism (ESM)—is not set up to deal with unsustainable debt.

The Euro area differs from other integrated regions
both in that its members have fewer instruments
to deal with debt crises—they cannot
devalue or inflate—and because a crisis in one
member can have catastrophic consequences for
others (by threatening the common currency).
This requires both a mechanism for the orderly
resolution of debt crises and stronger incentives to
prevent them. The current financial architecture in
the Euro area is inadequate in this respect, because
its main pillar—the European Stability Mechanism
(ESM)—is not set up to deal with unsustainable
debt. If it is used even when there are significant
concerns about the ability of borrowers to repay
their debts, it will become source of transfers, rather
than just crisis lending.

These problems could be addressed via an amendment
of the ESM treaty that encourages and legitimizes—
both legally and politically—debt restructuring
in unsustainable debt cases.

Importantly, Euro area countries must be given a
chance to deal with legacy debt before this regime
is introduced. For countries significantly above
the future upper debt threshold, this will require
a judgment of whether debt can be reduced below
the limit within a reasonable time frame. Where
the answer is no, the Euro area needs to make a
choice between an upfront restructuring – backed
by the ESM – and extra support, for example, in
the form of providing a joint and several guarantee
on new debt issuance as long as countries adhere
to an agreed fiscal consolidation path.

At the global level, the relatively small size of the
IMF, its de facto priority and its track record in
getting repaid make it less likely that crisis lending
will turn into transfers. However, experience
shows that incentives are stacked against the
timely recognition and restructuring of unsustainable
debts. Recent court rulings encouraging
holdouts, discouraging creditor participation in debt exchange offers, and bringing into question
the IMF’s priority status, will make this problem
worse. To address this without allowing sovereigns
to frivolously repudiate their debts, two alternative
mechanisms are proposed.

The main difference between the two proposals is
that the second would do more to correct biases
that delay necessary debt restructuring. Furthermore,
while both would deal with the holdout
problem in the long run, the IMF-based proposal
would have immediate effects, while better collective
action clauses would become effective only
gradually, as existing debt is replaced by newly issued
debt.

The world is currently less equipped to handle
problems of unsustainable debt than at any time
since the 1930s. At the same time, the extent of
these problems has grown. Reform proposals that
could address them have become more mature and
more targeted, and arguments that led to the rejection
of analogous proposals 10 years ago no longer
apply. It is time for policy makers to tackle the central
problems head on.

What ‘audit the Fed’ really means – and threatens