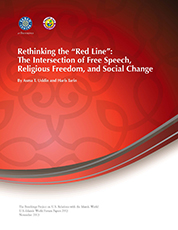 Free speech, particularly the freedom to speak about, criticize, or reject religion, continues to be a contentious issue among Muslims and between Muslims and non-Muslim compatriots. In this paper, Asma Uddin and Haris Tarin used the Organization of Islamic Cooperation’s Defamation of Religions Resolution as a case study to examine different definitions of free speech, alternative standards governing limits on free speech, and how the gaps among competing standards should be bridged.

Among the Key Findings:


Read other publications from the 2013 U.S.-Islamic World Forum »