Download the full introduction » (PDF)
Learn more about the book at cambridge.org » 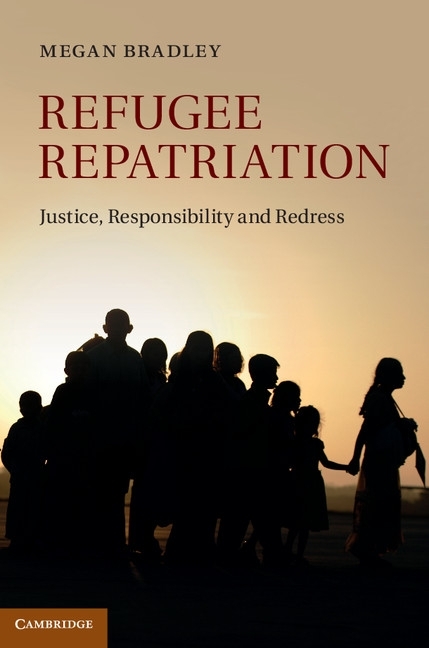 Certain crimes lie beyond the reach of repair. From torture and systematic rape to enslavement and ethnic cleansing, many of the violations that force refugees from their homes count among those injustices for which it is impossible to truly make amends. During the Cold War, many if not most refugees were resettled in western countries, defusing the explosive question of how refugees may be reconciled with their states of origin. Today, however, permanent resettlement is a rare solution to refugee crises. For millions of refugees, repatriation to their countries of origin is no longer an option but an imperative, the only alternative to the limbo of protracted displacement. This raises some critical questions: What can refugees legitimately expect from return? Are they entitled to anything more than a haphazard journey back to ruined or reoccupied homes in communities where their livelihoods are uncertain and their welcome lukewarm at best? If so, what are the conditions of a just return process? Who is obliged to ensure these conditions are met?

While sometimes fierce public and academic debates probe the obligations states of asylum owe to those harboured within their borders, the issue of what states of origin owe to returning refugees has often been overshadowed. Yet experiences from Guatemala and Cambodia to the Balkans and Afghanistan indicate that identifying the state of origin’s responsibilities to returnees and ensuring these duties are met is integral to safe and sustainable repatriation and peacebuilding processes and, in turn, a stable political future.

Historically, questions of justice and the ability of impoverished refugees to straggle back to their homes have rarely found space on political or scholarly agendas. However, over the past 25 years, the repatriation of refugees and the rectification of past injustices have emerged as multifaceted, pressing challenges for state policymakers and humanitarian practitioners alike. As former United Nations Secretary-General Kofi Annan argued in 2005, “The return of refugees and internally displaced persons is a major part of any post-conflict scenario. And it is far more than just a logistical operation. Indeed, it is often a critical factor in sustaining a peace process and in revitalising economic activity” (Annan 2005). The success of return operations depends on the ability of governments and non-state actors to confront and respond to the questions of justice the repatriation process puts front and centre, from the resolution of land disputes to accountability for the atrocities and inequalities that fuel forced migration.

Drawing on the tools of international law, moral theory, and political and historical analysis, this book focuses attention on the responsibilities states of origin bear towards their repatriating citizens and articulates a minimum account of a just return process. I contend that the goal of a just return must be to put returnees back on equal footing with their non-displaced co-nationals by recasting a new relationship of rights and duties between the state and its returning citizens. The conditions of just return match the core duties a legitimate state must provide for all its citizens: equal, effective protection for their security and basic human rights, including accountability for violations of these rights. Indeed, in the following chapters I will argue that remedies such as property restitution, compensation, apologies and truth commissions play a critical role in creating the conditions for a just return, as it is through such forms of redress that the state of origin may re-establish its legitimacy by acknowledging and attempting to make good on the duties it abrogated by forcing its citizens into exile. However, redress and return are invariably imperfect processes. While this book maintains that reparations are a critical expression of accountability for forced migration, and an essential component of a just return, it also engages in a detailed examination of the legal, moral and pragmatic political problems associated with efforts to uphold at least a degree of state responsibility for displacement and provide redress to returnees.