India and African leaders should work together to strengthen their commercial ties, write Amadou Sy and Andrew Westbury

Indian Prime Minister Narendra Modi will take an unprecedented step toward enhancing his country’s relationship with Africa when he hosts the 3rd India-Africa Forum Summit (IAFS) on October 26 – 29th in New Delhi. While IAFS have been held semi-regularly since 2008, next month’s session will be the first time all fifty-four African heads of states have been invited, constituting what the Ministry of External Affairs has described as India’s “biggest diplomatic event” of 2015.[1] The official summit agenda reportedly will address major global issues, including climate change, terrorism, United Nations Security Council reform, and public health concerns.[2] However, the growing trade and investment relationship between India and African countries will undoubtedly also be a focus of discussion. According to the International Monetary Fund, the value of India’s exports to the continent increased by more than 100% between 2008 and 2013, placing the country ahead of the United States as a supplier to African markets (Figure 1). Despite this dramatic growth, significant potential still exists to cultivate a more mutually-beneficial commercial relationship between India and Africa. The official delegates at October’s IAFS should dedicate time to identifying opportunities to diversify African exports to India markets; expand the reach of India’s foreign direct investment in the region; and develop strategies to better exploit the unique comparative advantages of Indian companies to advance Africa’s stated development goals.

India’s trade and investment relationship with African countries has increased dramatically over the past 15 years. In addition to gains in the country’s exports to Africa, sales of African products to India have also expanded significantly. The value of Sub-Saharan exports to India has increased by more than 80% since 2008 (albeit from a low base), a strong upward trend that diverges significantly from the huge drops in African exports to the United States following advancements in American hydraulic fracturing technology and the resulting increase in oil and gas production (Figure 2). Growing India-Africa trade has also prompted significant optimism about the future prospects of the relationship. Last year, during the World Economic Forum-India Summit in Delhi, a collection of African leaders and Indian businesses committed to expanding Indo-African trade to more than $500 billion by 2020, a target that would far exceed that of even China, Africa’s largest bilateral trading partner.[3] 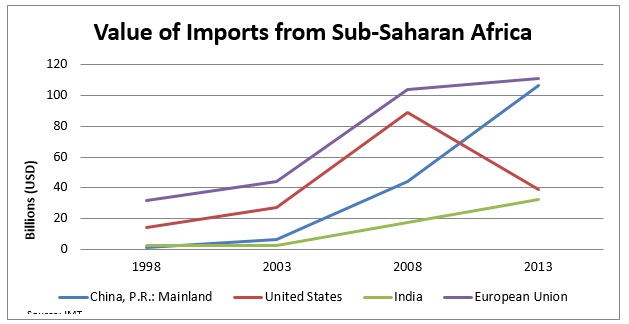 Despite the excitement about Indo-African trade, the current composition of product sales indicates an unbalance in the value accrued by both parties. According to the World Bank, a vast majority of Sub-Saharan African exports to India are comprised of raw material sales, while Indian exports to Sub-Saharan nations are mainly higher-end consumer goods (Figure 3 and 4). This pattern runs contrary to Africa’s long-stated objective to transition regional economies away from natural resource dependence and toward higher-productivity manufacturing, creating badly-needed employment opportunities in the region and boosting real wages. A similar trend in China’s trade with Africa prompted South African president Jacob Zuma to provocatively label the dynamic “unsustainable” during his keynote address at the last session of China’s comparable Africa summit mechanism, the Forum on China-Africa Cooperation (FOCAC) in 2012.[4] These issues are likely to come up during next month’s IAFS. 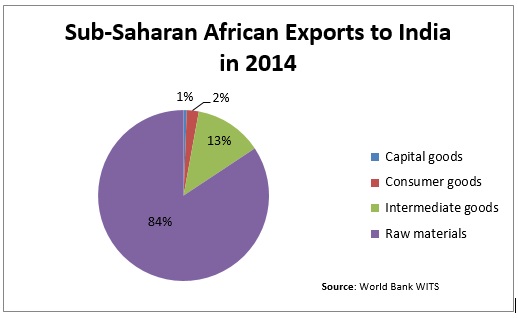 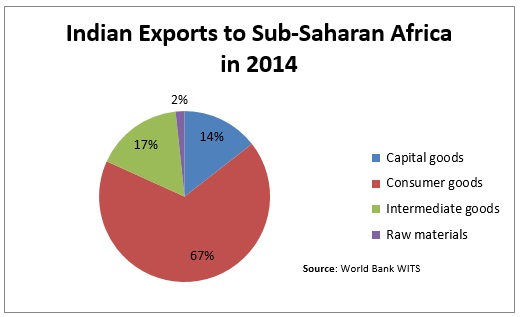 Investment trends between India and Africa have also increased dramatically in recent years. Since approximately 2010, African foreign direct investment (FDI) in India has towered above levels in other major world economies, like China, the European Union, and the United States (Figure 5). However, these startling figures relate mainly to the island-state of Mauritius, which was overall the “single largest source of FDI into India during the financial year 2014-15”.[5] Mauritius’ outsized role in the Indian economy is frequently associated with the island’s low capital gains tax and reported past abuse of the India-Mauritius ‘Double Taxation Avoidance Agreement’. [6] 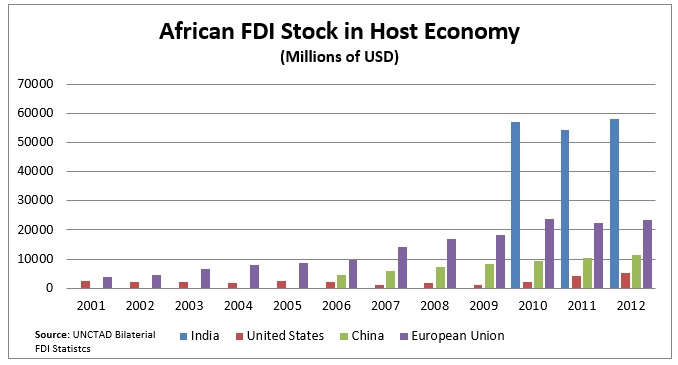 India’s FDI stock in Africa has grown in recent years, increasing by nearly 11% between 2010 and 2012, according to the United Nations Conference on Trade and Development. While India investment is rising in the region, it is concentrated within a few countries, and, again, Mauritius dominates within the region (Figure 6). The investment pattern replicates that of the United States, with most American commerce concentrated geographically within a few African states. India’s FDI is, however, more comparable to China’s FDI in the sense that it penetrates multiple sectors.[7] According to a recent study by McKinsey’s Asia Center, India’s FDI in Africa includes investment in communications, agriculture, healthcare industries, software, and information technology services.[8]For many African countries, these diversified Indian investments are likely very welcome as overall FDI in Africa continues to be primarily focused in the mining and energy sectors. The McKinsey report underscores India’s market niche within Africa countries, projecting that Indian business could quadruple its revenue from Africa to more than 160 billion by 2025 if they continue to leverage their “unique value propositions”. 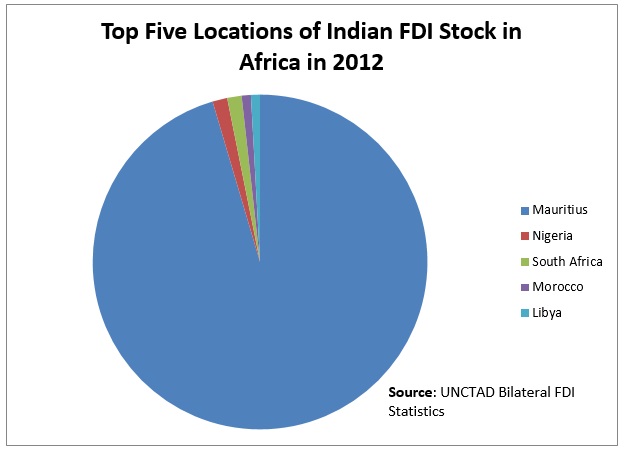 Significant potential exists to expand the India-Africa commercial relationship. Perhaps most notably, India has a large diaspora across Africa, with more than three million people of Indian origin on the continent currently.[9] This population of Indo-Africans is often highly integrated into the continent’s business community, with 48% of Indian ethnic group firm owners holding citizenship in African countries, compared with just 4% of Chinese ethnicity with African.[10] Moreover, important complementarities exist between these markets, with, for example, similar population sizes in Africa and India and comparable percentages of the population working in the agricultural sector. In many ways, the parallels between the African and Indian business environment could mean that firms on either side of the relationship would have mutual understandings of how to deal with challenges that exist in both markets, including infrastructural deficits, fragmented consumer markets, and certain levels of operational risk or ambiguity. Given these factors, India and African leaders should work during the IAFS to strengthen their commercial ties. Specific recommendations include:

Dr. Amadou Sy is Director of the Africa Growth Initiative at the Brookings Institution and a member of the Editorial Board of the Global Credit Review. He was previously deputy division chief at the International Monetary Fund. He focuses on banking, capital markets, and macroeconomics in Africa and emerging markets.

Andrew Westbury is the associate director of the Africa Growth Initiative at the Brookings Institution. He has previously worked with the United Nations, Land O’Lakes, Inc., and the international charity Global Communities as a Senior Program Officer for Africa. He began his career as a US Peace Corps Volunteer in eastern Nepal.

This article is part of a Brookings India briefing book “India and Africa: Forging A Strategic Partnership“, released in October 2015. Brookings India does not take institutional positions on policy issues and each essay in this policy brief solely reflects the views of the author(s).

The inside story of India’s coal and power crises

Indian tech unicorns are gaining at China’s expense. Is this a blessing or a bubble waiting to burst?

Ed tech and educational opportunity during the COVID-19 school closures