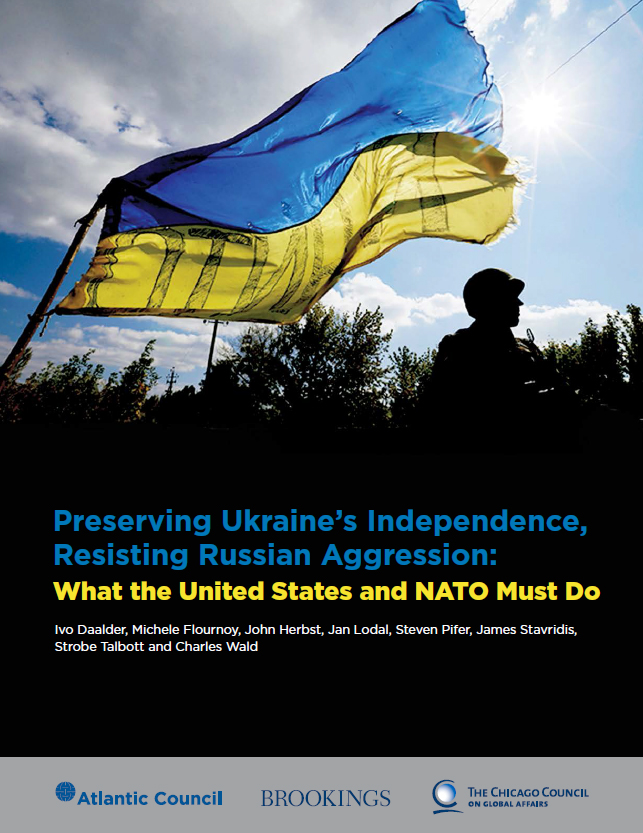 “Preserving Ukraine’s Independence, Resisting Russian Aggression: What the United States and NATO Must Do” is a project of The Brookings Institution, The Atlantic Council, and The Chicago Council on Global Affairs, which argues for greater U.S. leadership in ending the conflict in Ukraine and Russian involvement in the region. The report, authored by eight former senior U.S. diplomatic and military officials, urges the United States and NATO to bolster Ukraine’s defense and deter further Russian aggression by providing military assistance to Ukraine—including lethal defensive assistance.

The report is informed by and summarizes discussions in January with senior NATO officials in Brussels and senior Ukrainian civilian and military officials in Kyiv and at the Ukrainian “anti-terror operation” headquarters in Kramatorsk, in eastern Ukraine.

• The White House and Congress should commit serious funds to upgrade Ukraine’s defense capabilities, specifically providing $1 billion in military assistance this year, followed by an additional $1 billion each in the next two fiscal years;

• The U.S. government should alter its policy and begin providing lethal assistance to Ukraine’s military and;

• The U.S. government should approach other NATO countries about also providing military assistance to Ukraine.

The focus of this assistance should be on enhancing Ukraine’s defensive capabilities, including by providing counter-battery radars to pinpoint the origin of long-range rocket and artillery strikes, unmanned aerial vehicles (UAVs), electronic counter-measures for use against opposing UAVs, secure communications capabilities, armored Humvees and medical support equipment. In addition, it should include lethal defensive capabilities, especially light anti-armor missiles.

The report’s authors collectively urge the Obama administration and NATO member governments to move rapidly and implement the aforementioned recommendations. They write,“President Putin may hope to achieve glory through restoring, through intimidation and force, Russian dominion over its neighbors. But a peaceful world requires opposing this through decisive action.”

Member, Board of Directors

Member of the Board, the Atlantic Council, Dean, Fletcher School of Law and Diplomacy, Tufts University, and former Supreme Allied Commander Europe

Member of the Board, the Atlantic Council, and former Deputy Commander, U.S. European Command

The eight distinguished foreign policy practitioners and scholars who contributed to this report include:

• Michele Flournoy, Chair, Center for a New American Security, and former Under Secretary of Defense