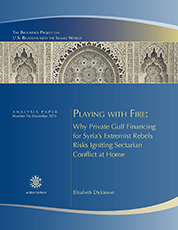 In this new Saban Center analysis paper, Elizabeth Dickinson examines why private financing by Gulf donors for Syria’s extremist rebels risks igniting sectarian conflict in Gulf countries. Over the last two and a half years, Kuwait has emerged as a financing and organizational hub for charities and individuals supporting Syria’s myriad rebel groups. These donors have taken advantage of Kuwait’s unique freedom of association and its relatively weak financial rules to channel money to some of the estimated 1,000 rebel brigades now fighting against Syrian president Bashar al-Asad.

The paper charts how individual donors in the Gulf encouraged the founding of armed groups, helped to shape the ideological and at times extremist agendas of rebel brigades, and contributed to the fracturing of the military opposition. From the early days of the Syrian uprising, Kuwait-based donors—including one group currently under U.S. sanction for terrorist financing—began to pressure Syrians to take up arms. The new brigades often adopted the ideological outlook of their donors. As the war dragged on and the civilian death toll rose, the path toward extremism became self-reinforcing. Today, there is evidence that Kuwaiti donors have backed rebels who have committed atrocities and who are either directly linked to al Qaeda or cooperate with its affiliated brigades on the ground.

Although the fighting is thousands of miles away, explains Dickinson, Kuwaiti involvement in the Syrian conflict is risky for Kuwait itself—a small country of just over three million, a third of which are Shi’a. Many of Kuwait’s highest-profile Sunni and tribal opposition figures have been involved in fundraising; supporting the mujahedeen (military fighters) has become an important political gesture. Shi’ite figures allegedly involved are also high profile businessmen and politicians. But both Sunni and Shi’ite campaigns increasingly employ sectarian rhetoric, and residents of all sects report feeling increased communal tensions.

Western countries, including the United States, argues Dickinson, could do a great deal to assist Kuwait in controlling private donations to extremist elements and/or figures linked to the Syrian regime. Perhaps the simplest way is messaging. The U.S. State Department said Washington is and will “stress the need to—for Kuwait to have a robust anti-money laundering/counter terrorism financing regime.” A high-level conversation could have the effect of accelerating work to implement new financial regulations. Kuwait’s new Financial Investigation’s Unit could also benefit from further international expertise and intelligence sharing.

The United States must act to stop illegal fishing in 2023

Arms control needs a shot in the arm