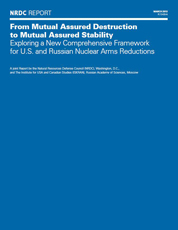 
, Senior Fellow Steven Pifer contributed a chapter on dealing with nonstrategic nuclear weapons. The chapter describes U.S., NATO and Russian policies regarding such weapons, discusses the issues they raise for arms control, outlines various arms control approaches, and concludes with recommendations for U.S. and Russian action.

Nonstrategic nuclear weapons—also referred to as tactical or sub-strategic nuclear weapons—have long been elements of the U.S. and Soviet/Russian arsenals. Thousands of these weapons on both sides were eliminated as a result of the “presidential nuclear initiatives” in 1991 and 1992, and the 1987 Intermediate-Range Nuclear Forces (INF) Treaty banned the sides’ groundbased ballistic and cruise missiles with ranges between 500 and 5500 kilometers. Aside from the INF Treaty’s ban, however, nonstrategic nuclear weapons are not constrained by current U.S.-Russian arms control agreements.

The United States and Russia have different views of the roles of nonstrategic nuclear weapons (NSNW—the term in this paper is used to apply to warheads, not delivery systems, and covers all nuclear warheads except for those for strategic delivery vehicles). The U.S. government and NATO regard U.S. NSNW deployed forward in Europe as having only marginal military utility; their value is seen primarily in political terms, symbolizing the link between the United States and NATO Europe. NATO is currently reviewing its nuclear posture as part of its deterrence and defense posture review.

The precise role of NSNW in Russian military strategy is less clear. The Russian General Staff appears to assign them more of a military role in terms of offsetting what the Russian military regards as conventional force imbalances in comparison with NATO and, though it is rarely mentioned, China. The rationale for the large number is unclear.

Washington has stated that it wishes to include NSNW, along with non-deployed strategic warheads, in the next round of nuclear arms reduction negotiations with Russia. Moscow has said that other issues—such as missile defense, long-range conventional strike and the fate of the Conventional Armed Forces in Europe (CFE) Treaty—must be addressed before it would consider further nuclear reductions. Russians officials have also stated that the withdrawal of U.S. NSNW to national territory should be a precondition for any negotiations covering NSNW.

Should the sides agree to put NSNW into an arms control context, there are a range of options that they could pursue. These include confidence-building measures, unilateral steps and negotiated outcomes. They might choose some combination of these options as well.