Note: The full version of this

is available in French with an accompanying English 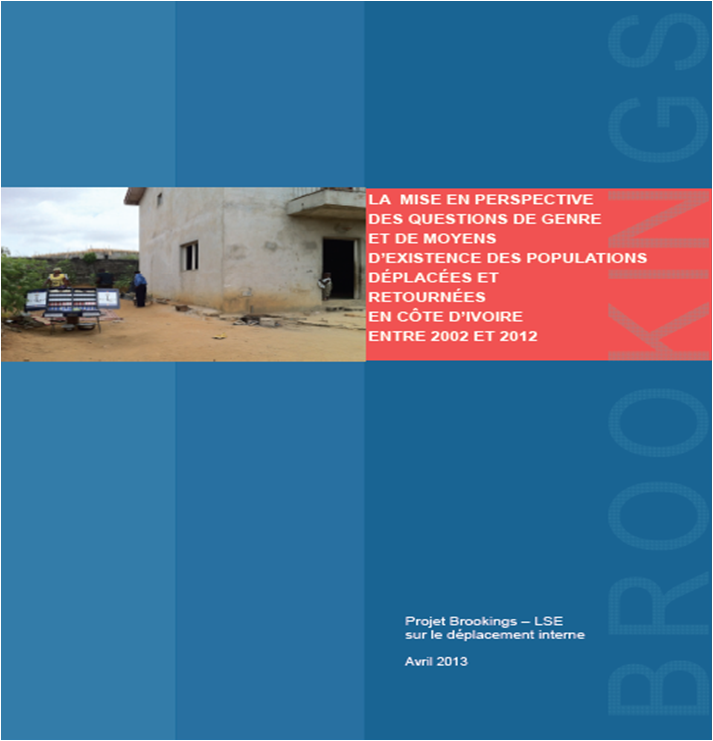 Internal displacement is not a new phenomenon in Côte d’Ivoire. Conflict and displacement in Côte d’Ivoire are linked to competition for political power, the economic downturn, and a corresponding sharp increase in poverty in a country that had previously enjoyed a comparatively high standard of development.

In many ways, women have borne the brunt of the country’s conflicts and its protracted displacement situation. Displaced women suffered numerous human rights violations, and along with their families have struggled to re-establish sustainable livelihoods – both while displaced, and upon returning to their communities or seeking out another solution to their displacement. The conflict resulted in the destruction of the productive capital of thousands of households, and a marked increase in single-parent families due to the death of many men in the violence. Looting, destruction and land-grabbing have undercut the economic sectors (including subsistence agriculture and petty trade) that typically employ the poorest of the poor, particularly female heads of household. This has undermined the ability of many displaced families to recover from the economic losses associated with their forced migration, and to secure sustainable solutions to their displacement. Inequitable property inheritance practices and heightened risk of sexual and gender-based violence, particularly amongst internally displaced young women, further complicate the efforts of displaced women to make a living.

This research underlines the importance of understanding the gender dimensions of IDP livelihoods, taking into particular account household-level dynamics and the broader socio-economic context within which livelihood interventions are implemented. While many displaced women assume new roles as primary breadwinners for their families, this research suggests that the ability of displaced women to develop relevant adaptation strategies, particularly through the creation of sustainable livelihoods, depends in part on the socio-economic status of their households before the crisis. Without other employed household members, many middle class Ivorian women cut off from their area of origin or from their social networks encountered particular difficulties adapting and re-establishing means of existence – they are the main victims of a conflict-induced drop in social status. Women with access to support structures and who were economically active before the crisis – those aged 30 to 50 years – have been best able to develop and implement strategies to save money and improve their livelihoods.