Following Chelsea Clinton’s pregnancy announcement in April of 2014, media outlets speculated whether the future grandchild to Hillary Clinton would impact her potential presidential campaign in 2016. In this research paper, Jennifer Lawless addresses the question of whether family roles and responsibilities affect a potential candidate’s political career. Lawless analyzes both female and male candidates and finds that traditional roles and responsibilities have little influence on candidates’ decision to run for office.

Lawless conducted a study that examined the relationship between family arrangements and political ambition, looking specifically at whether being married, having children and having other household responsibilities affects the desire to run for office. She found that none of these variables had significant impact on candidacy considerations. While women’s numeric under-representation in politics is glaring, regardless of the level of office studied and the gender gap in political ambition among potential candidates is as large now as it was a decade ago, Lawless concludes that none of these disparities are influenced by family roles.

Data from Lawless’ study implies the “family explanation” does little to explain the gender disparity in interest in running for office once potential candidates find themselves well-situated in the pipeline professions. Narrowing the list of plausible explanations – especially ones that seem to have so much intuitive appeal – for women’s under-representation is a critical step to understanding the long term prospects for gender parity in U.S. political institutions. 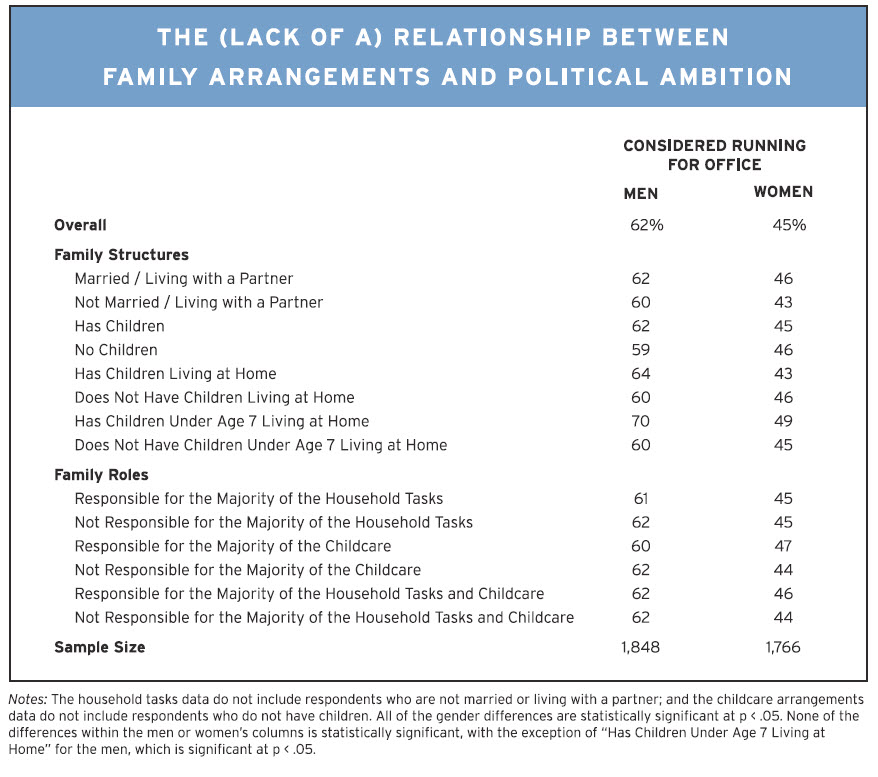