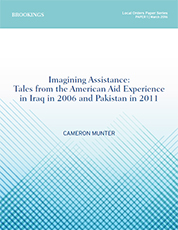 For more than a decade, government assistance to Afghanistan, Iraq, and Pakistan (the so-called AIP countries) has dominated United States aid efforts. And as the examples below illustrate, American institutions and mindsets found it extraordinarily difficult to adjust to aid in unsafe places. Cameron Munter draws on his experience as the head of the Provincial Reconstruction Team (PRT) in Mosul, Iraq in 2006 and as ambassador of the United States to Pakistan in Islamabad in 2011, with a description of U.S. reconstruction and state-building from which we may find lessons to consider in the future.

In 2006, when he went to Mosul as the first leader of the first PRT, the American civilian and military authorities in Baghdad painfully learned that the post-conflict situation would not correct itself. The undergrowth of our own bureaucratic structure prevented us from gaining a sophisticated understanding of our surroundings. Members of the PRT came and left after a few months, without passing on their hard-obtained knowledge. Local authorities quickly realized that the PRT had neither the money nor the firepower of the brigade commanders. And most of all, the guiding principles in place were still the creation of a kind of constitutional framework where political leaders, police, courts, businesspeople, and citizens would have institutions familiar to Americans, institutions that would work as we knew how to make them work.

Munter arrived in Pakistan at a time of great hope for U.S.-Pakistani relations. In 2011, in a series of meetings with the U.S. deputy secretary of state for resources and the head of USAID, Kerry-Lugar-Berman priorities took center stage: education, energy efficiency, job creation, special projects in the tribal areas, and public health. It is one thing to define a task and quite another to apply it to the specific context of a country in which security considerations prevent most USAID workers from even laying eyes on their projects. Overall, it seems the United States was much better at measuring its commitment to a prosperous, democratic Pakistan at peace with its neighbors by counting how much it spent and how fast rather than creating the proper relationship with those on the ground with whom it might have partnered.

Under these circumstances, what are lessons learned? When security is shaky, assistance is difficult. It may be that in situations like the AIP countries, we only have the capacity to engage in humanitarian aid and immediate reconstruction. If that is so, then the whole question of engagement in dangerous places is reopened: In a military setting, with military tasks, and thus a military system of organization, can civilian assistance succeed? Money spent is the way we measure commitment in such a setting, and that doesn’t bring the results we need.