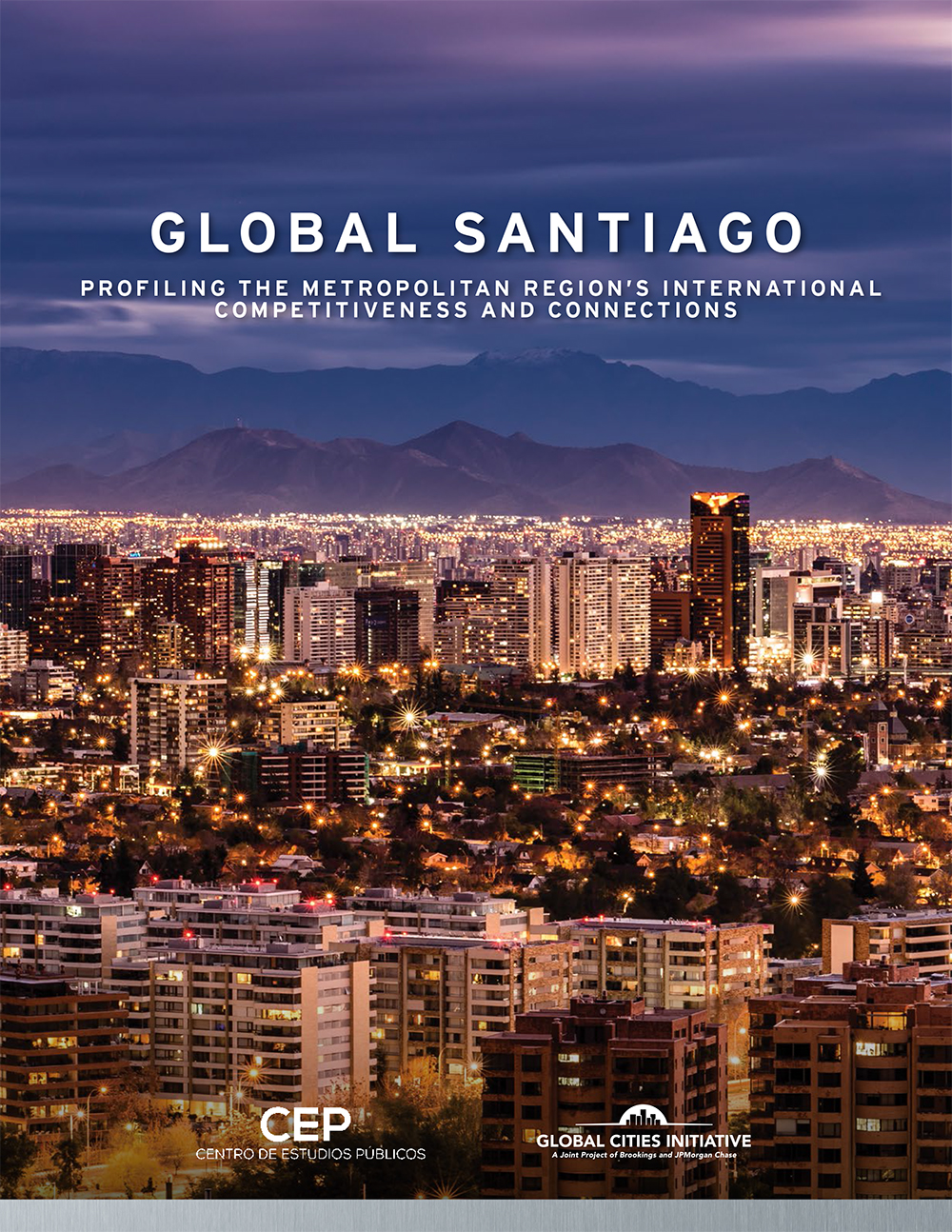 Over the past two decades, the Santiago Metropolitan Region, like all of Chile, has emerged on the global stage. Accounting for nearly half of the nation’s GDP, Santiago contains a significant set of economic assets—an increasingly well-educated workforce, major universities, and a stable of large global companies and budding start-ups.

These strengths position it well to lead Chile’s path toward a more productive, technology-intensive economy that competes in global markets based on knowledge rather than raw materials. This type of economy, which fully embraces trade and foreign direct investment as a growth driver, requires the capacity to generate new ideas and process innovations, a broadly educated workforce, and sound infrastructure to connect firms and workers to each other and the rest of the world.

This report, developed as part of the Global Cities Initiative, a joint project of Brookings and JPMorgan Chase, benchmarks the Santiago Metropolitan Region against eight global peer regions based on its economic size, wealth, productivity, industrial structure, and competitiveness factors. In doing so, the report provides a global competitiveness framework for local and national leaders working to sustain the region’s prosperity. Its key findings are:

Substantial economic progress has occurred since 2000, but macroeconomic shifts present new challenges to growth. Production of goods and services in the Santiago Metropolitan Region has expanded consistently over the past 15 years. Average standards of living and labor productivity are much higher today than they were in 2000. Gains in output, GDP per capita, and output per worker outpace most of Santiago’s peer regions. But challenges remain: low job creation, slowing productivity growth in recent years, and continued high levels of income inequality. Shifts in the global economy—declining commodity prices, China’s slowing demand for Chilean exports, and the broader slowdown among its Latin American neighbors—have the potential to exacerbate these challenges. In a composite economic performance index, Santiago placed third among nine regions.

The Santiago Metropolitan Region can take advantage of changing market, technology, and demographic trends, but it must focus on the core drivers and enablers of competitiveness. A competitive region is one in which firms can compete successfully in the global economy while supporting high and rising living standards for local households. Globally competitive traded sectors, functioning innovation ecosystems, and skilled labor are the key drivers of overall productivity, employment creation, and income growth. Two enablers support these three drivers: well-connected, spatially efficient infrastructure and a reliable governance structure and business environment. The Santiago Metropolitan Region contains notable strengths and significant opportunities to better deploy these five factors to increase its global competitiveness.

1. Trade: The Santiago Metropolitan Region can leverage its specialization in business services to boost exports and foreign direct investment. With a relatively small domestic market, trade and investment must be a critical component of Santiago’s long-term economic strategy. To that end, it is encouraging that output and employment in traded sectors have grown at a faster clip than the national economy and many global peer regions. Exports have also posted superior growth rates to the national economy, led by the region’s mining and food and beverage sectors. However, several macro trends confirm that the mining sector will not continue to be the economic engine it was in the past decade, indicating the need for diversification into new tradable industries. Santiago’s status as Chile’s transportation and business services hub (it houses over 90 percent of corporate headquarters in Chile) make those sectors compelling opportunities to boost exports and foreign investment. Yet, the national services trade deficit has steadily increased over the past decade. Inward foreign direct investment flows fall in the
middle of global peers, with key sectors being communications, metals, and renewable and alternative energy. In a composite trade index, Santiago placed fifth among global peer regions.

2. Innovation: Anchored by leading research universities and a budding venture capital scene, Santiago’s innovation ecosystem could benefit from greater cooperation between universities and firms. The region’s research universities are important assets for knowledge creation and have the potential to accelerate technology transfer, but could collaborate more with the private sector to better align university research with the industrial demands of the region, and reach beyond Chile’s border to collaborate internationally with other universities and firms. Venture capital markets do find Santiago start-ups an attractive proposition. Compared to international peers, the Santiago Metropolitan Region attracts a significant amount of venture capital given its size. However, patenting rates per capita lag most global peers, indicating that Santiago’s innovation ecosystem is not yet on par with peer Asian metro areas. In a composite innovation index, Santiago placed fourth among peer regions.

3. Talent: The education levels and skills of the region’s workforce have increased substantially, but the education system must improve its quality, particularly at the primary and secondary level, while increasing access to the university level for lower-income students. Santiago has a relatively well-educated workforce, ranking in the upper tier of its peers, a defining achievement of the past couple decades. However barriers to accessing higher education persist, reducing potential productivity gains and perpetuating inequalities. Additional support to students with scarce resources, efforts to standardize training certifications, and a greater emphasis in technical skills in short supply can both increase social mobility and improve the competitiveness of the region. Additionally, effectively integrating the foreign-born population into Santiago’s labor market and social life can help solidify a steady supply of workers to maintain growth. Santiago’s relatively high quality of life offer can serve as an attractive asset in drawing international talent. In a composite talent index, Santiago placed fourth among global peer regions.

4. Infrastructure: Santiago is the clear international access point for Chile, but it must continue to upgrade its digital, housing, and transportation infrastructure. The Santiago Metropolitan Region houses most of the country’s international access points. The Comodoro Arturo Merino Benítez International Airport, while not moving the same volume of passengers as airports in peer regions, is Chile’s clear connection to the rest of the world. Freight and logistics infrastructure in Chile lags most peer countries, largely because it is not as easy to arrange international shipments in Chile as in other countries. Even with this deficiency, firms in the Santiago Metropolitan Region benefit from relatively low exporting costs. Digital connectivity—as measured by Internet download speeds—fall in the middle of global peers but adoption rates could be improved, likely through lowering the cost of Internet access. Within the region, continued population and income growth continues to increase demand for housing and transportation, necessitating new investments in both. Equally important is the long-term coordination
between housing, transportation, and land use decisions along key corridors and nodes to improve the region’s spatial efficiency. In a composite infrastructure index, Santiago ranked last among peer regions.

5. Governance: Firms benefit from a sound business and regulatory environment, but sub-national governments currently have little autonomy to steward Santiago’s economic future. The Santiago Metropolitan Region benefits from a good business and regulatory environment, reflecting Chile’s legacy of pursuing free trade, macroeconomic soundness, and regulatory transparency. Where the region lags is in its overall autonomy to determine its economic future. Chile remains a very centralized country. New reforms that enhance sub-national autonomy and flexibility can position the country’s metropolitan regions more centrally in issues of economic competitiveness. As debates unfold about the proper distribution of powers and responsibilities between central and regional governments, it is important to remember that economic development is increasingly a shared enterprise between government, the private sector, and educational and civic institutions.