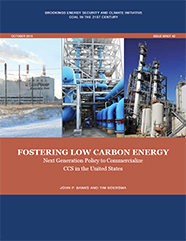 Next month, global leaders will convene in Paris for the United Nations Conference on Climate Change. Greenhouse gas (GHG) emissions reduction strategies are important to reduce and manage the risks of climate change. While the share of renewable energy in the global energy mix is expected to increase, transitioning to a low carbon economy will take time, and coal and natural gas are projected to play a prominent role in the power and industrial sectors for a number of decades. Climate mitigation technologies such as carbon capture and storage (CCS)—an integrated process of capturing CO2 from power generation or industrial activities and storing it permanently via processing or injection into suitable geological formations–can play an important role in global efforts to limit GHG emissions.

Why CCS is important

CCS is a low-carbon technology that can form part of a balanced portfolio approach to address climate change, while also offering economic and national security advantages. Today, CCS is the only technology that can achieve significant emissions reductions (90 percent capture or higher) from existing fossil fuel infrastructure. Indeed, many studies have suggested that unless CCS becomes a key part of a low carbon technology portfolio, it is increasingly likely that energy-system carbon emissions will not be reduced to levels that limit global warming to 2 degrees Celsius.

Climate change is an important global issue, and it has been well documented that continued increases in global carbon emissions are fueled predominantly by fossil fuel usage—particularly coal, and to a lesser extent, oil and natural gas. According to International Energy Agency estimates over the next several decades, coal will play a significant role in the global energy portfolio. While coal demand in OECD countries is projected to fall by 2040, in non-OECD economies such as Africa, India, China, Indonesia, Brazil, and Southeast Asia, coal usage is projected to increase by a third. Coal offers a cheap and abundant feedstock for electricity generation in many emerging markets where increasing access to electricity is a priority. It is also important to note that burning natural gas also results in substantial amounts of CO2 emissions. Given that the International Energy Agency projects the share of natural gas in the global energy mix to rise, CCS for natural gas will, over time, also become a serious political and environmental issue.

CCS can play a crucial role in addressing climate change

While many countries support renewable energy in order to shift away from reliance on fossil fuels, it is uncertain whether this approach alone will achieve sufficient emissions reductions to achieve the 2 degree Celsius target. Low-emission technologies such as CCS can play a vital role in contributing to global mitigation efforts, and research has shown that in the long run GHG emission reduction would be more expensive without CCS deployment.

In our policy brief, we assess the risks and barriers related to CCS at electricity plants, and the existing policy framework to support its application. Our study aims to identify the major obstacles facing CCS commercialization and offer recommendations for policies that can spur technological innovation and effect further cost reductions.

The key conclusions we reached in our analysis are as follows:

Development of CCS as a low carbon technology requires a “next generation” policy framework that recognizes the multitude of risks and political challenges along with the policy mechanisms needed to address them. In our study, we highlight specific mechanisms that we believe should form the basis of a thoughtful discussion on what is required to support commercialization of CCS: