Editor’s Note: This report was originally published by the Canadian Chamber of Commerce. 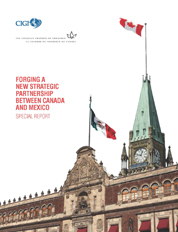 The visit to Ottawa by Mexico’s President-elect Enrique Peña Nieto the week of November 26, provides Canada with the opportunity to elevate its bilateral relationship with Mexico to the level of a strategic partnership. Bilateral trade and investment have increased steadily since Canada signed the North American Free Trade Agreement, but there remains enormous, untapped potential, particularly in Mexico. In this report, Andrés Rozental and Perrin Beatty offer substantive recommendations that point to the benefit of efforts that will intensify bilateral partnerships, not only in their own right, but also in strengthening both countries’ ability to deal more effectively with the United States in pursuing matters of mutual concern.