Youth employment rates have decreased dramatically over the past decade as the economy has faltered and the youth population has grown, as shown in figure 5-1 (Bureau of Labor Statistics n.d.). Unemployment rates among youth are especially acute during the summer, as more teens temporarily enter the labor force (Morisi 2010; Sum et al. 2008). In response to this problem, the American Recovery and Reinvestment Act of 2009 (ARRA) provided summer jobs for low-income youth with the goal of improving workforce readiness, although this increase in the availability of summer jobs was temporary (Bellotti et al. 2010). This policy memo offers a proposal to strengthen and expand work-related summer activities with the goal of fostering the skill development, education, and economic success of low-income youth. 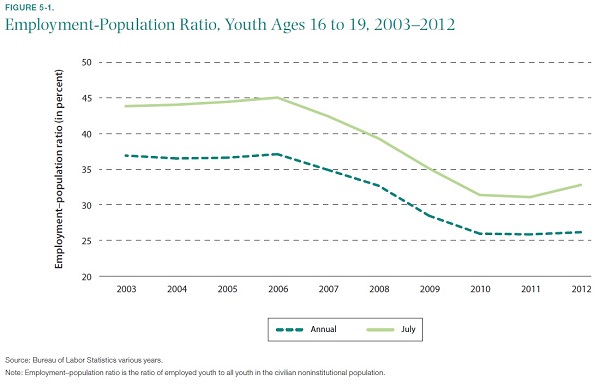 Summer jobs should be part of a broader strategy for poverty alleviation, with the potential to benefit disadvantaged youth in multiple ways. In addition to providing work experience and an immediate income transfer to low-income youth, an emerging body of research also suggests that summer youth employment programs (SYEPs) can improve educational outcomes and social and emotional development, and decrease negative behaviors (including criminal behaviors), at least in the short term (Heller 2014; Leos-Urbel forthcoming; Sum, Trubskyy, and McHugh 2013; Walker and Viella-Velez 1992). A number of states and localities offer SYEPs on varying scales, although the availability of jobs fluctuates year to year. We propose that the federal government make grants to state and local governments to work with local community-based organizations (CBOs) on the expansion of summer job programs. Targeting low-income youth ages sixteen to nineteen (enrolled in or graduated from high school), these expanded programs would provide employment and training to young people who currently face many barriers to entering the workforce.

Emerging evidence indicates that summer jobs can do more than put a low-income youth to work. Using a rigorous lottery design, Leos-Urbel (forthcoming) finds that getting a job during the summer of 2007 through the SYEP in New York City (NYC) led to increases in school attendance in the following school year of roughly 1 percent overall and 3 percent for students who may be at greater educational risk. These effects are of a similar magnitude to some rigorously evaluated interventions that are explicitly designed to increase school attendance (Dee 2011; Riccio et al. 2010). A follow-up study by Schwartz et al. (in progress) examining the impact of the NYC program from 2006–2009 also finds small increases in school performance.

An earlier rigorous random-assignment evaluation of intensive summer jobs programs that included an academic component found that the programs increased reading and math scores in the short term (Walker and Viella-Velez 1992).1 Notably, the evaluation found no long-term academic or employment differences, which has led some to conclude that summer jobs are not a good strategy for reducing poverty.2 Another experimental evaluation found that a summer jobs program in Philadelphia increased the likelihood of youth getting a job, but did not change intermediate academic or employment outcomes (McClanahan, Sipe, and Smith 2004). This proposal builds on the lessons of these earlier programs but takes some different approaches, as we describe below.

Recent research also suggests that summer jobs can help reduce violent behavior and crime. Preliminary results from an experimental evaluation of One Summer Plus—which combined summer jobs with a cognitive behavioral therapy–based program aimed at reducing youth violence—indicate that the program led to a large decrease in violent-crime arrests (Heller 2014). A study of a summer jobs program in Boston finds that, compared to a comparison group of eligible youth from the program waiting list, program participants were significantly more likely to reduce risky and violent behaviors, including the use of drugs and alcohol, physical fighting, damaging property, and threatening someone with a weapon (Sum, Trubskyy, and McHugh 2013). The program also created much-needed jobs for program participants, as just 27 percent of youth in the comparison group were able to find a summer job. Finally, an experimental evaluation of the After School Matters—an after-school apprenticeship program for high school students during the school year in Chicago—found improvements in behavior and social and emotional development, although it found no effect on academic outcomes (Hirsch et al. 2011). Importantly, 91 percent of students in the comparison group in Chicago were involved in some other after-school activity (most common) or paid work, indicating that the availability of other opportunities (i.e., the counterfactual of what they would have done without the program) may differ considerably during the school year, and suggesting that the summer may be an especially promising time for such interventions.