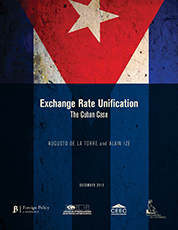 Since 2011, the Cuban authorities have placed exchange rate unification as one of their top policy priorities. Indeed, the current dual exchange rate system—whereby a one-to-one exchange rate for the “convertible peso” coexists with a twenty four-to-one exchange rate for the “Cuban peso” (both against the U.S. dollar)—introduces severe and pervasive distortions with costly consequences for resource allocation and the growth potential of the Cuban economy. At the same time, the unusually large (by international comparison) spread between the two exchange rates exacerbates the transition costs and thus constitutes one of the main reasons delaying their unification.

De la Torre and Ize argue in favor of a fast unification approach, cushioned during a pre-announced transition period by lump-sum taxes and subsidies applied on an enterprise-by-enterprise basis. By allowing for relative price changes to operate in full from the start, the immediate unification would maximize efficiency gains. At the same time, by cushioning the Cuban economy from potentially large transitional pains—including fiscal revenue losses, productive dislocations, inflationary outbursts and distributional effects—the lump-sum taxes and subsidies (to be gradually phased out) would ease the transition, thereby boosting policy credibility. However, to ensure the viability of the scheme and the rapid materialization of the efficiency gains, important habilitating reforms would be needed, particularly regarding the governance of state enterprises.

This paper was prepared for a series of expert workshops on Cuban economic change in comparative perspective organized by the Foreign Policy Latin America Initiative at the Brookings Institution and the University of Havana’s Center for the Study of the Cuban Economy and the Center for the Study of the International Economy. It was developed from a presentation made at an experts’ seminar in Havana, Cuba on September 26, 2013 and subsequently revised.