The United States can use its oil and gas bonanza to put itself back at the forefront of global trade, and take a leadership role in climate change mitigation. Charles K. Ebinger and Kevin Massy drafted this memorandum to President Obama as part of Big Bets and Black Swans: A Presidential Briefing Book.

Your second term offers a significant opportunity for the United States to strengthen its economic and geopolitical position by taking advantage of near-term global demand for oil, gas and coal, while bolstering its competitive position in the longer-term global market for lower-carbon technology and taking a leadership role in the battle to address climate change.

By adopting policies that encourage the development and export of U.S. hydrocarbons including oil, coal and gas, the United States can take advantage of the rising demand for these fuels in developing and emerging economies around the world. As a condition of greater exploration, production and trade in these fuels, the Federal Government should impose a modest but meaningful volumetric or carbon-based tax on their production, with the resultant revenues allocated specifically to the development of two technologies that are essential to global efforts to fight climate change: carbon capture and sequestration; and advanced batteries, both at the grid and vehicle scale.

While the global political economy is likely to throw up many surprises over the next 20 years, three things appear certain:

U.S. global power and influence will have to be shared with others, as emerging powers such as China and India gain economic and geopolitical influence. As highlighted by the recent National Intelligence Council Report, Global Trends 2030, the global political order will change to one in which “power will shift to networks and coalitions in a multi-polar world.”

• Asia will continue to experience rapid growth in energy demand, most of which will have to be met with fossil fuels under any scenario. China’s energy demand is set to grow by 60 percent between 2010 and 2030, while India’s demand is projected to more than double. Despite the development of renewable and low-carbon technologies such as wind, solar and nuclear, coal will continue to play a leading role in global energy supply, with consumption in Asia’s electric power sector alone projected to increase by 63 percent between 2011 and 2020. Asian demand for energy will more than compensate for a broad leveling off of energy demand and a reduction in carbon emissions among the OECD countries.

• Consequently, global carbon emissions will continue rising at an unsustainable rate as efforts to get an internationally binding agreement on emissions reductions stall and investments in low-carbon technologies falter in the economic downturn. In its most recent annual assessment, the IEA concluded: “Taking all new developments and policies into account, the world is still failing to put the global energy system onto a more sustainable path.”

These global trends are coinciding with large structural domestic changes in the United States. Facing weak economic growth prospects, a massive debt burden, fiscal constraints and a dysfunctional political system, the one bright spot for our country in recent years has been the unexpected boom in oil and gas production. U.S. oil production rose at its highest annual rate ever in 2012 to levels not seen in decades. Thanks to technical developments in hydraulic fracturing and lateral drilling, natural gas production and inventories are at all-time highs. While the natural gas bonanza and environmental concerns are leading to a reduced role for coal in the U.S. power sector, exports of the commodity — of which the United States is the largest resource holder — are also at record levels.

The oil and gas boom has had many commentators breathlessly heralding an era of U.S. energy independence. This is unlikely to materialize either practically or economically. Under even the most optimistic scenarios for domestic hydrocarbon production, the United States will continue to import millions of barrels of crude oil per day for the foreseeable future, albeit increasingly from our own hemisphere rather than the Middle East. And as long as the United States is connected to the global trading system, it will be subject to supply and demand shocks beyond its borders, meaning that price disruptions anywhere in the world will be passed on to U.S. consumers.

However, there is a way in which the U.S. can use its oil and gas bonanza to arrest both its relative economic and political decline to put itself back at the forefront of global trade and to take a leadership role in climate change mitigation.

Irrespective of actions by OECD countries, China, India and other emerging nations will burn oil, gas and coal in ever greater quantities for the foreseeable future. The main beneficiaries of this demand are likely to be the OPEC nations, Russia, Australia and other oil, gas and coal producers. Given its huge reserves of hydrocarbons, the United States could position itself as perhaps the principal beneficiary of this demand by adopting a near-term policy of full-scale, export-led oil, gas and coal development. Such a policy would involve the expedited permitting of oil and gas production and ancillary pipeline infrastructure projects and the enabling of crude oil and gas exports, which are currently subject to policy restrictions or prohibitions. The resultant surge in production and exports would strengthen both the country’s fiscal position through export revenues and job creation; and its political position through weakening the market power and the revenue generation of OPEC nations and Russia. It would also bring geopolitical benefits through the deepening of partnerships with key consumers such as China and India.

The obvious opposition to such a policy is on environmental grounds. With global warming an unavoidable and worsening reality, such a course of action is open to criticism of being irresponsibly self-interested. However, a policy of full-scale hydrocarbon development can be consistent with leadership on climate change if, as a strict condition of the rapid development and export of our oil, gas, and coal resources, the production of hydrocarbons is taxed, either on a volumetric or carbon-content basis. You should then allocate the revenues to a modern “Apollo Mission” effort toward the development of carbon capture and storage (CCS), and advanced batteries and storage technologies. CCS is a necessary technology for any meaningful reduction in climate change given the continued prominence of coal in the global power generation mix. Advanced battery and alternative fuel storage technologies are essential to make electric cars competitively viable and to give solar and wind power the reliability and scale they need to compete with fossil fuels. The policy will also work to move the domestic economy towards lower-carbon consumption in power generation and transportation and to prove the new technologies at scale.

Having gained a competitive advantage in green technologies, the United States can then become the dominant global producer and exporter of CCS technology, advanced batteries and other lower-carbon products and services, maintaining its competitive position in the global energy economy.

The implementation of this policy will not be easy. There is likely to be opposition to exports of oil and gas on the grounds of U.S. energy security and ideological opposition to new taxes. Such concerns should be addressed by greater efforts at public education on the importance of global trade to U.S. energy security and the domestic economic and geopolitical benefits of expanded production.

In a business-as-usual scenario, the world will continue its hydrocarbondependent trajectory towards an unsustainable level of carbon emissions with the principal economic benefits accruing to other resource-rich nations. By adopting this “black-gold-green” policy, the United States could simultaneously realize the near-term economic and geopolitical benefits generated by the world’s near-term need for hydrocarbons while taking a leadership role in the development and deployment of the technologies that are able to meaningfully address climate change over the longer term. 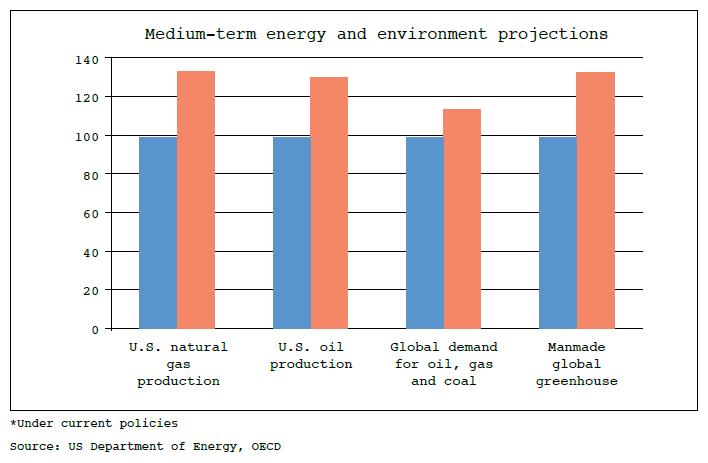 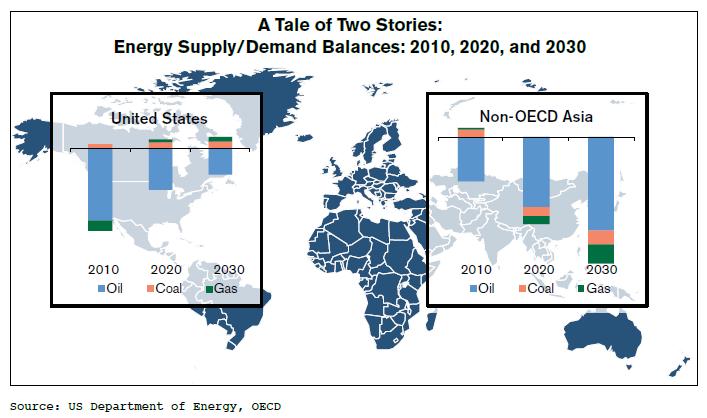