This paper presents a political-economy analysis of the Egyptian transition experience from the fall of President Hosni Mubarak in February 2011 until the end of 2013, and considers options for the future. Establishing a stable democracy in a country with weak institutions and no democratic culture will take years or even decades. With the benefit of hindsight, most observers were too optimistic in 2011 when they predicted that the “Arab Spring” would quickly lead to democracy. They are probably too pessimistic today when they declare the failure of Egypt’s democratic transition. The millions of Egyptians who swarmed into Tahrir Square in January 2011 demanding that Mubarak step down, and then again in June 2013 asking for the overthrow of President Mohammed Morsi, have learned how to use “people power.” A wall of fear has been broken, and it would be difficult for another autocratic regime to succeed in ruling Egypt for an extended period of time. 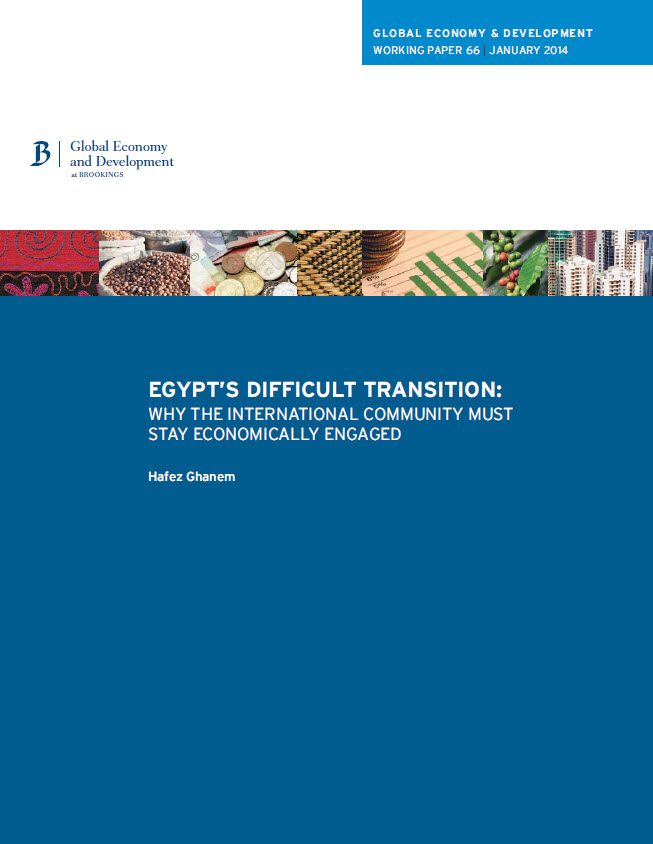 The political struggle taking place in Egypt today has roots that go back to the late 19th century. For about a century Islamists and secular-nationalists have been fighting over Egypt’s identity and future. Their differences could sometimes seem irreconcilable. It is not clear how a vision of Egypt as a small part of a large Islamic community can coexist with a vision of Egypt as one of the oldest civilizations and nation-states in the world. Similarly, it is not clear how Islamists’ interpretation of Shariah can be made consistent with an open and democratic society.

The escalation of this political struggle and the increasing violence was caused by a mismanagement of the transition. Both the military leadership that took power after the fall of Mubarak and the Muslim Brotherhood that ruled the country from mid-2012 to mid-2013 must bear part of the blame. The military’s decision to hold elections before agreement on a constitution and the “rules of the game” ensured a crushing Brotherhood victory at the polls and the exclusion of other political and social groups. And, the Brotherhood’s failure to compromise with secular forces and reach consensus on important issues of national identity, together with their inability to tackle economic problems, led to the popular uprising against them in June 2013.

Western aid needs to be used strategically and be combined with knowledge-sharing and technology-transfer to support democratization and help achieve the Egyptian people’s dream of “bread, liberty, social justice and human dignity.”

The international community needs to take a patient and long-term view of developments in Egypt. Western interests and values would probably be best served by maintaining its engagement with Egypt and its economic assistance. Western aid is small relative to the size of the Egyptian economy and relative to the massive financial flows from the Persian Gulf oil producers. Therefore, western aid needs to be used strategically and be combined with knowledge-sharing and technology-transfer to support democratization and help achieve the Egyptian people’s dream of “bread, liberty, social justice and human dignity.”

This paper does not argue for giving carte blanche to the current leadership in Cairo. But it argues for accompanying them as long as they implement their roadmap for moving toward democracy. By remaining engaged with Egypt the international community can continue its high-level policy dialogue in support of democratic reforms, and it can modulate its assistance to reflect progress on the road to democracy. This paper argues that the immediate objective of donor assistance should be to help achieve inclusive growth and social justice, which are necessary for democratic development. Areas where international community interventions could be particularly useful are: (1) building inclusive economic institutions, (2) supporting small and medium businesses, and (3) fighting rural poverty through agricultural projects and strengthening the social safety net system to protect small and landless farmers.