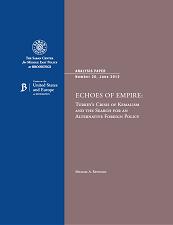 With Turkey a critical partner to any solution to the crisis in Syria and the standoff with Iran, and to U.S. interests in the Middle East in general, understanding Ankara’s motivations and interests has become increasingly important for U.S. policymakers. Many observers of Turkey, however, are concerned about the country’s move from a staunchly secular, reliable U.S. partner to a more assertive actor with an Eastern-oriented outlook.

In this Saban Center–Center on the United States and Europe Analysis Paper, Echoes of Empire: Turkey’s Crisis of Kemalism and the Search for an Alternative Foreign Policy, Princeton University’s Michael A. Reynolds offers a detailed examination of the evolution of Ankara’s foreign policy and regional outlook. By analyzing the factors that challenged the country’s secular Kemalist tradition, particularly Turkey’s inability to resolve its “Kurdish question,” and detailing the influential views of  its foreign minister, Ahmet Davutoğlu, Reynolds offers much-needed insight into Turkey’s new position.

Rather than the result of short-term tactical thinking or a passing trend, Reynolds argues, Turkey’s shift is the product of a deeply felt, religiously informed worldview that identifies secularism as threatening to Turkey’s wellbeing. Only by understanding the prism through which Turkey’s leaders see their country and surrounding region, can U.S. policymakers best forge a relationship that advances critical U.S. interests in the Middle East.