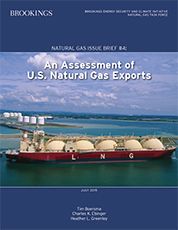 Estimates about the amount of U.S. natural gas that will be competitive in global markets vary widely, in part because a number of new supply sources are expected to enter the market, and because there is fierce competition with other fuel sources, like coal and renewables. In addition, and partly as a result, demand for natural gas—in particular in Asia—in the coming years is not expected to rise as rapidly as earlier forecasts have suggested. As more supplies come into the market in the coming years, the market is expected to become oversupplied. In this context, it will be increasingly unlikely that new liquefaction projects will be financed, beyond the ones that have been contracted and reached a final investment decision.

In this natural gas brief, the fourth in a series of briefings by the Energy Security and Climate Initiative at Brookings on developments in the natural gas market, the authors discuss the debate on the future of natural gas exports from the United States. The brief provides an overview of the U.S. regulatory framework surrounding LNG exports, as well as an assessment of the competitive position of the United States vis-à-vis other suppliers that are emerging worldwide.