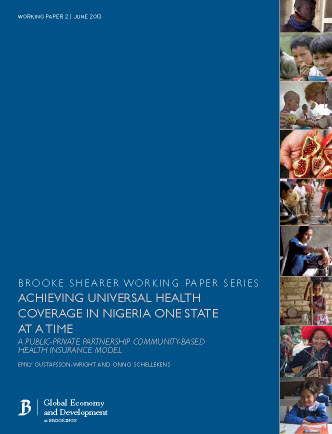 Two years ago, in a rural community in Kwara State,
Nigeria, we met Fatima a 62 year old grandmother who
was struggling to care for herself and her two granddaughters
aged three and nine. The children had been
left with Fatima when their parents went to Lagos to
look for work. Shortly thereafter, Fatima became ill, leaving
her unable to work selling her homemade soybean
cakes in the market for an income. She was forced to
borrow money from other family members to pay for
her medical expenses. When she could no longer borrow
money she had to reduce spending on food items
for herself and her grandchildren to buy medicine from
the local medicine vendor in her village. Fatima, as the
majority of poor Nigerians, was not covered by Nigeria’s
National Health Insurance Scheme (NHIS) because she is
not formally employed. She was suffering from severe
hypertension, both of her granddaughters were malnourished
and the youngest was suffering from malaria when
a Hygeia Community Health Care (HCHC) enrollment
officer arrived in her community a year later. By enrolling
in the HCHC health insurance plan supported by the
Dutch Health Insurance Fund (HIF) and implemented by
PharmAccess, a nongovernmental organization (NGO),
Fatima was able to receive the care that she and her
granddaughter needed in the clinic, which had already
been upgraded through the same program. With the appropriate
treatment, her health stabilized and soon she
was able to get back to work, earn a livelihood and care
for her granddaughters.

Fatima’s story is not uncommon in Nigeria and many
other parts of the developing world. The inability to pay
for health care expenses, which forces people to reduce
spending on food or other basic needs, and the lack of
access to quality care are unfortunately common realities
seen by many poor and underprivileged. Falling ill can
have devastating and long-lasting consequences especially
for poor households, both through income loss and
high medical expenditures. Data suggest that more than
150 million people globally suffer financial catastrophe
every year due to out-of-pocket health expenditures. Nigeria has among the highest out-of-pocket health
spending and poorest health indicators in the world.

Most people would agree with the idea that all individuals
should have access to health services and should
not face financial hardship as a result of health care costs. Universal health coverage (UHC), the concept that
encompasses these goals, has gained wide attention and
support in recent years. How to achieve UHC however,
is a more complex question with a variety of disparate
viewpoints. In this paper, we discuss UHC in the context
of Nigeria, a middle-income country that nevertheless
is facing enormous health challenges. We discuss the
constraints that have prevented Nigeria from attaining
UHC to date. We then present promising evidence from
large and small-scale insurance interventions in other
parts of the developing world. Next, we describe a public-
private partnership model of community-based health
insurance currently operating in Nigeria and other parts
of Africa and show evidence of the program’s ability to
increase health care utilization, provide financial protection
and improve health status in target communities.
We contend that UHC in Nigeria can only be achieved
by addressing both supply and demand-side constraints
simultaneously. The solution must also include building
on existing public and private institutions and informal
networks, leveraging existing capital, and empowering
clients and local communities. An innovative model such
as the one presented here that has been implemented
successfully in one Nigerian state, could be replicated
in others; tackling this challenge one state at a time, to
eventually achieve the goal of access to health care and
financial protection for all.